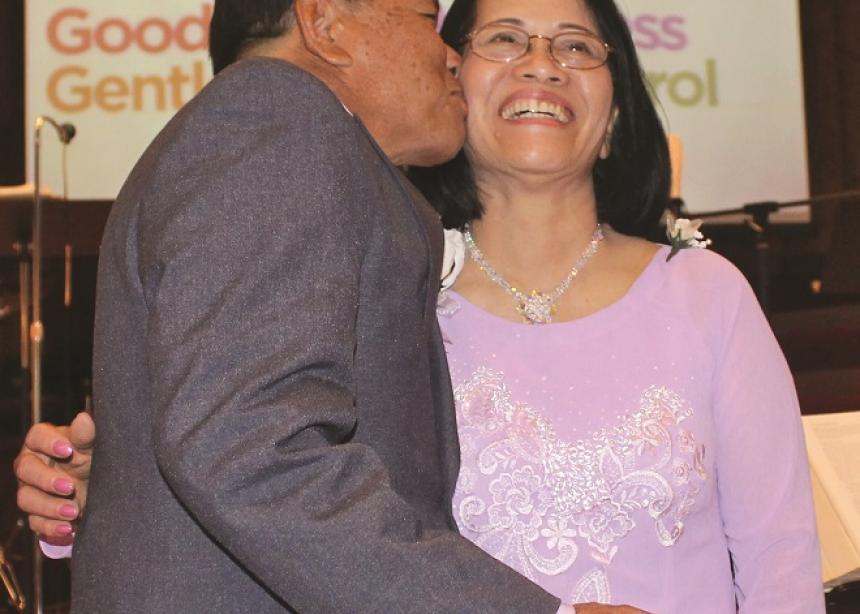 Peter Nguyen and Kim Bui received an anniversary gift on August 10 that they never got at their wedding 40 years ago: a church ceremony with a marriage licence.

The pair had been married in Vietnam on April 30, 1974, but post-war conditions in that country, combined with Nguyen’s inability to produce a birth certificate, meant that they could not be issued a government marriage licence. Instead, they pledged their vows in a commitment ceremony outside on the grounds of their church.

They emigrated to Canada in 1984 and went on to have five children. Eventually they settled in Abbotsford and, until recently, were active in the local Vietnamese Christian Church.

In July, they moved to Campbell River to help start a Vietnamese church there, returning to Abbotsford in August to celebrate 40 years of marriage with their children.

But Bui had always felt something was missing. She never had a “real” wedding, and although the Canadian government recognized the couple as married when they moved to this country, they wanted the piece of paper to prove it. Could the church help?

Since the Vietnamese Christian Church is part of Emmanuel Mennonite, Bui and Nguyen asked April Yamasaki, Emmanuel’s pastor, for assistance. They decided on a simple wedding ceremony during the August 10 worship service, with Yamasaki officiating, with the marriage to be registered with the province.

It was pointed out that this wedding was a return to Mennonite tradition. Years ago, weddings sometimes took place following Sunday morning worship so the entire church community could take part.

The congregation enjoys a refreshment fellowship time after Sunday worship in the summer, so the coffee hour was turned into a wedding reception, complete with guest book and wedding cake. The Nguyen-Bui family also provided spring rolls as part of their cultural tradition.

For the couple, repeating their marriage vows in a church ceremony made their anniversary complete.

“The pastor has the authority to bless us,” said Bui, adding that they felt it was important “to stand in front of the church and get the blessing from the Lord Jesus.” 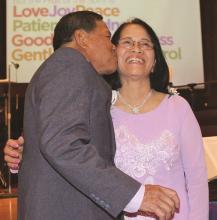