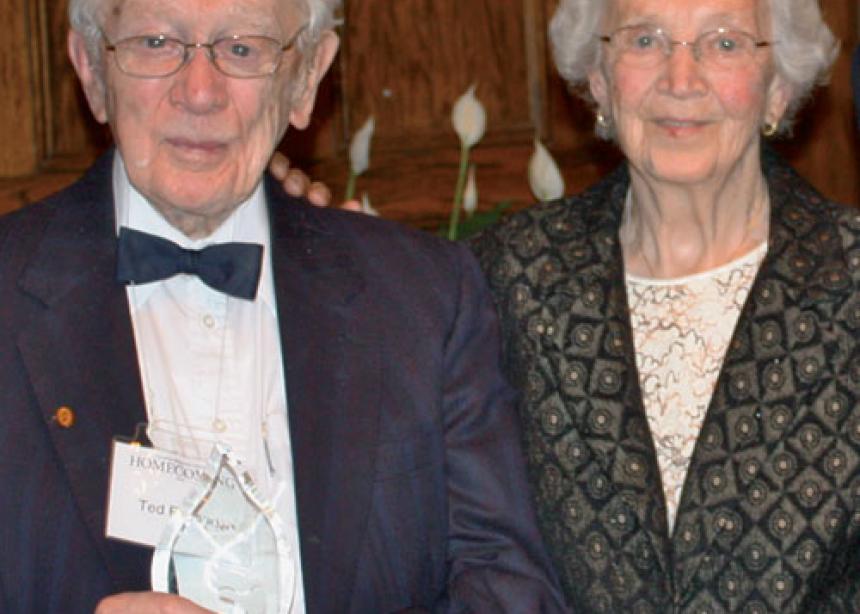 The award recognizes distinguished achievement and service within the broader community or church, through business, leadership, artistic, political or volunteer contributions.

Retired businessman Ted E. Friesen, together with his two brothers, further developed D.W. Friesen & Sons (now Friesens Corporation) into a major business, fully employee-owned and serving the community in significant ways. Throughout his career, Friesen has been an active participant in Mennonite Central Committee (MCC), the Canadian Conference of Mennonites and southern Manitoba’s Eden Mental Health organization. He also served as the secretary and president of the Mennonite Historical Society of Canada for 28 years (1968-96); it was during this period that the three-volume “Mennonites in Canada” series was published. A lifelong resident of Altona, Friesen is a founding member of Altona Mennonite Church.

“Over the 35 years that Ted and his two brothers, Dave and Ray, led the business, they grew it into one of the premier, most technologically sophisticated printing companies in North America,” said CMU president Gerald Gerbrandt at the presentation ceremony held in conjunction with this year’s homecoming events. “Ted, like his father and brothers, believed that a business should serve its community, and Friesens has modelled that commitment.”

Friesens Corporation, Altona’s largest employer, has grown into a company of international status, and prints for such organizations as National Geographic and major American universities.

Gerbrandt noted that, besides being an outstanding businessman, Friesen is a committed congregant and an involved community citizen. “Ted grew up in the Altona Bergthaler [Mennonite] Church, and remained active there for many years,” he said. “Later, he became a founding member of Altona Mennonite, where he and Linie [his wife] remain active. As a young man, he became involved with the Board of Christian Service of the Canadian Conference,” Gerbrandt continued. “And in 1964 he was on the first executive of MCC Canada, helping to establish MCC’s office in Ottawa in 1970.”

His involvement with MCC developed his conviction that Mennonites in Canada needed their history told, said Gerbrandt, which led to the establishment of the Mennonite Historical Society of Canada in 1968.

“I am very grateful for the honour bestowed on me on this occasion by CMU,” said Friesen in accepting the award. “That feeling is also accompanied by a sense of humility when I remember colleagues and co-workers in the various organizations that I have been associated with in the past who would be as worthy, if not more worthy, for achievements in the area of our mutual work. So, as a survivor, I also accept this award remembering their contributions.”

“I worked in two communities,” Friesen commented, “the local one, which is the Altona community, and the community of Canada, on the board level of Mennonite Central Committee and the Mennonite Historical Society of Canada and other organizations. When I look at all of these today, I am amazed at how they have grown from humble beginnings and have reached a position that is making a significant impact today . . . both in the Mennonite and in the larger community. I rejoice that past efforts have been blessed beyond all expectations.”

Friesen concluded with these words: “I want to give tribute to my good wife Linie and my family, who have been very, very supportive all the way. And, in closing, I simply want to say with J.S. Bach, ‘Soli deo gloria—to God be the glory.’ ” 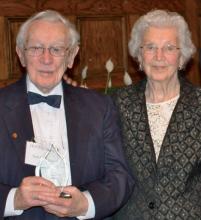