The smell of contentment

May 25, 2011 | God at work in Us
Dave Rogalsky | Eastern Canada Correspondent
Kitchener, Ont. 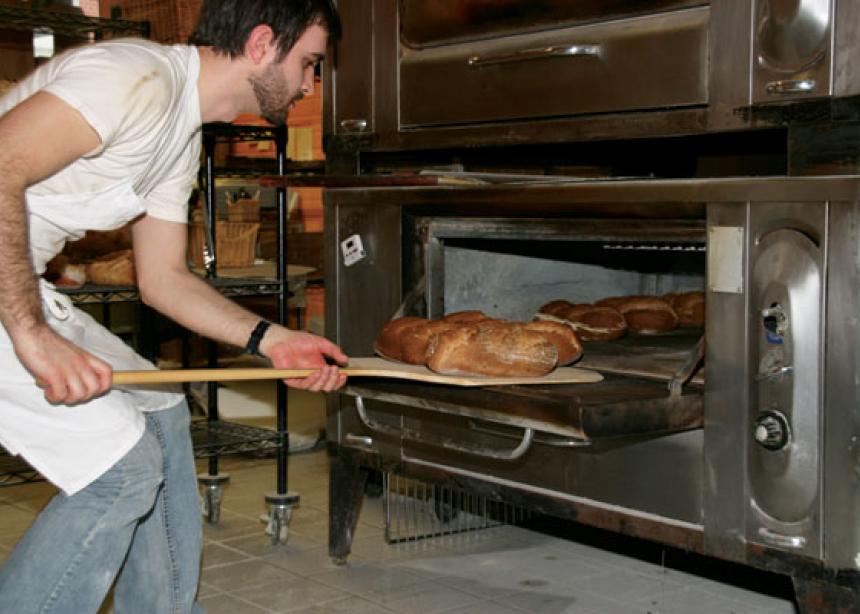 <p>Tavis Weber checks on loaves of fresh-baked whole-grain whole-wheat bread at the Golden Hearth Bakery he owns with his wife Heidi in downtown, Kitchener, Ont.</p>

“There are some things I don’t understand,” opines Bruce Weber about his nephew, Tavis Weber. “The guy goes to school in music for four years and then he goes and buys a bakery.”

Four years as a voice major at Wilfrid Laurier University, Waterloo, Ont., had made it clear to Weber that there were parts of a music career that were not to his liking. “[In music] you basically have to job interview for anything you want to do,” he says. “I don’t like job interviews and didn’t like the thought of doing that for everything I wanted to do.” He also admits to being uncomfortable with being a voice teacher because he doesn’t want to “mess people up.”

He likes cooking and baking at home for himself and his wife Heidi, so he looked into cooking but found that working in a restaurant kitchen was very stressful. When the couple heard that the Golden Hearth Bakery in downtown Kitchener was up for sale, they thought about it. Six months later, he worked with the departing owners for three weeks and became the boss on May 10, 2010. Since Heidi works for the Waterloo Region Homes for Mental Health, they hired Nate Salter as their only employee.

People who come in to shop are looking for something different than mass-produced breads found in the average grocery store. Golden Hearth is an artisanal bakery producing mostly whole-grain, organic, hand-made breads, cookies, croissants, squares and granola.

This is a place where Weber’s Mennonite roots show in his concern for the environment and local farmers. Whole-grain flours come from Oak Manor Farms near Tavistock, and unbleached flour—for the few ‘white’ products—comes from New Life Mills in Hanover, both within the proverbial 100 miles.

Other themes that run through Weber’s life are those of giving to the community, pragmatism, gratitude, pacifism and serv-ice. Leftover products go to the House of Friendship, a Kitchener organization reaching out to those on the margins of society.

The creativity of working with his hands, the week-to-week regularity, the sense of making something worthwhile and the immediate results—“You know within a half an hour if you’ve done something wrong”—are joys for Weber. He likes the independence of being his own boss, although going to bed at 7 p.m. on Friday for the 2 a.m. start on Saturday morning is a definite dislike.

While it would be difficult to live on the income of the bakery alone at this point, he hopes to grow the business, not to become huge but to live well. The business, on the corner of Cedar Street and King Street East, is open from Wednesday to Saturday. Besides a regular flow of customers coming through the front door, Golden Hearth also supplies bread and other baking to a dozen or so local restaurants and stores.

Like many young adults who grew up Mennonite, Weber has not felt at home in the church for a long time. A small group of like-minded friends meet occasionally to talk about their spiritual walks together, but this is a recent development for Weber, who felt forced to go to church and found that a world religions course at Rockway Mennonite Collegiate, Kitchener, opened his eyes to what he sees as many potential paths to God. He had a hard time with God for a number of years until proselytizing atheists turned him off and renewed an openness towards God in him. He wants room to question, to hold provisional answers, to explore other spiritualities.

In the long run, he hopes to contribute to the community as an entrepreneur and an individual, raise a family with his wife, and live a good life in Waterloo Region. In spite of his Uncle Bruce’s consternation, he says of buying the bakery, “I’m glad I did it.”

Tavis Weber checks on loaves of fresh-baked whole-grain whole-wheat bread at the Golden Hearth Bakery he owns with his wife Heidi in downtown, Kitchener, Ont.