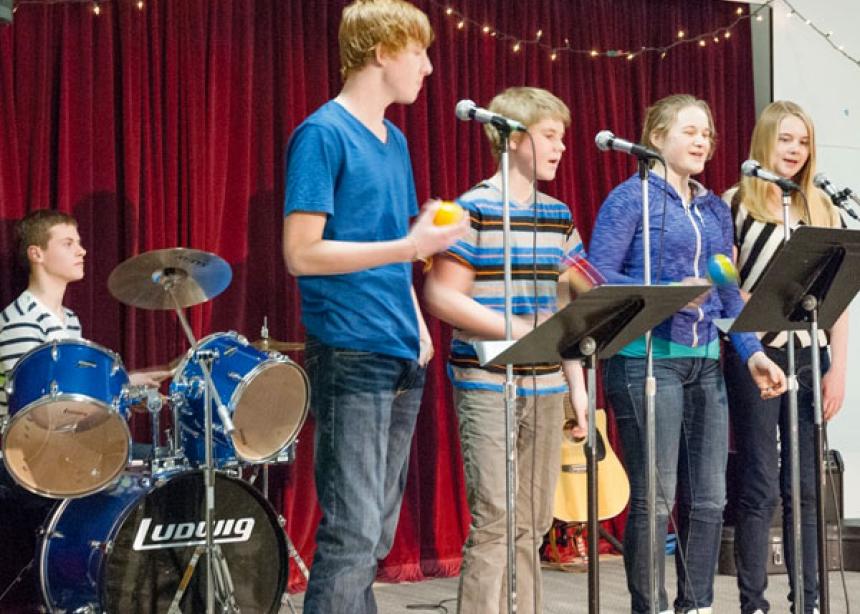 A group of young teenage musicians are a highlight at the Mather Coffeehouse on April 13. Zach Tiessen, Tyler Rempel, Myles Tiessen, Brianna Hildebrand and Daria Hildebrand are from Trinity and Crystal City Mennonite churches and Cornerstone Ministries Church.

The tiny hamlet of Mather in southwestern Manitoba is home to about 100 people, but for one night of the year the population burgeons. On April 13, the Mather community held its annual coffeehouse at the community hall, drawing about 130 people from far and wide.

Begun eight years ago by members of Trinity Mennonite Fellowship, the coffeehouse has become a highly anticipated event in the region.

Judy Hildebrand who, together with Art Harms, has been on the organizing committee since its beginning, says it was especially timely this year because two middle-aged people from their small congregation had died during the year. “Even though it’s getting harder to find people to help plan the coffeehouse, we wanted to make sure it happened this year,” she says. “Our congregation was going through a hard time and so this year was not the year to stop.”

The coffeehouses began when Jeff Thiessen, a musician, was pastor of this small congregation of about 50 members. “We have quite a few musicians in our church and he was looking for ways to showcase local talent,” says Hildebrand. “After Jeff left, we continued. It is a really good community event for Mather.”

From the beginning, the organizing committee decided on several agencies and organizations it would like to support with proceeds from the coffeehouse.

“Over the years, we have supported different Mennonite Central Committee projects like Global Family, Foodgrains Bank, Agape Table, our local food bank, and Frontier Foundation, which teaches people in northern communities how to log their trees and build homes,” says Hildebrand.

This year, $1,831 was raised for Christian Peacemaker Teams.

Although the coffeehouse idea was born out of Trinity, it has never been part of the church’s programming.

“We are just kind of an ad hoc committee,” says Hildebrand. “We want to do this and so we get together.”

Although there is a lot of talent in the small local congregation, “there is not always a lot of energy,” she says. “Like many communities, our farm women often have off-the-farm jobs and even some of the farming husbands as well. As a church, we don’t do much fundraising or social events because everyone is so busy. But when there is a cause, or if something comes up, we know how to pull together.”

Besides the music, delicious homemade baking is also a crowd attraction. In the past, Hildebrand made many of the homemade cinnamon buns and doughnuts, but this year Trinity’s food committee, Pauline Zacharias and Lil Krahn, took up the challenge and provided homemade tarts.

“It has been such a great event every year,” says Hildebrand. “It is very hard to say that we’re not going to do any more. After the concert, we realized what a great evening it has been and really there was not that much work involved.” 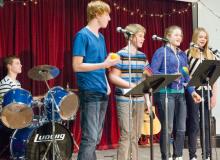 A group of young teenage musicians are a highlight at the Mather Coffeehouse on April 13. Zach Tiessen, Tyler Rempel, Myles Tiessen, Brianna Hildebrand and Daria Hildebrand are from Trinity and Crystal City Mennonite churches and Cornerstone Ministries Church.