Among the 28 receiving degrees from all over the globe 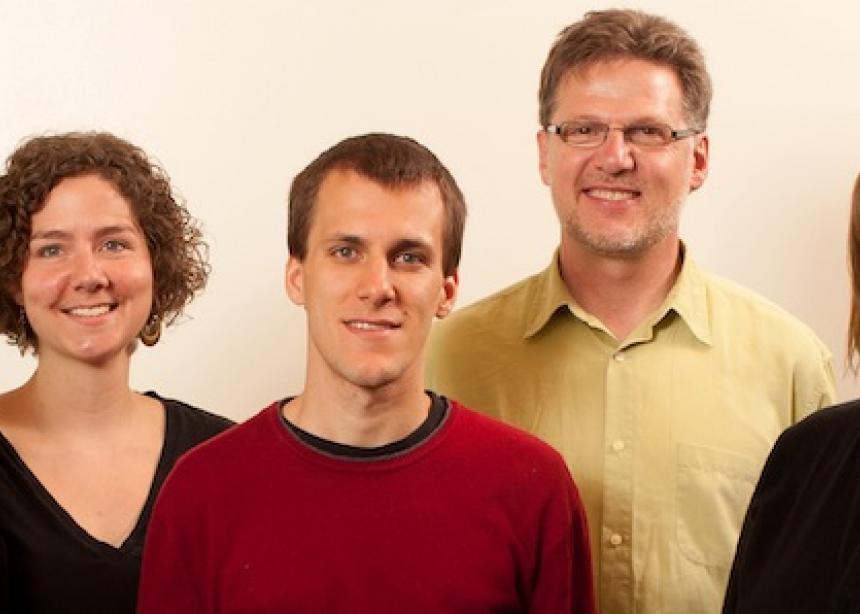 With words “God’s justice and God’s peace” from the first hymn in Hymnal: A Worship Book as a backdrop

for the Associated Mennonite Biblical Seminary commencement service on May 21, speaker Heidi Neumark began her address with a well-known Old Testament story of injustice.

Neumark, pastor of Trinity Lutheran Church of Manhattan, New York, used the story from I Kings of King Ahab coveting Naboth’s vineyard as a starting point. A vineyard takes many years to be fruitful, but Ahab wanted the land for a vegetable garden, she recounted. Then she compared the work of the vineyard to that of a seminary education. “You have labored in a vineyard and come from a long heritage with deep roots,” she said, tracing those roots all the way back to the waters of Jordan River where Jesus was baptized.

Sharing several examples of marginalized people served by the South Bronx congregation where she was pastor for 19 years, Neumark confessed, “We who have gone before you have not found a good balance between being true to one’s beliefs without dehumanizing others. I’m excited to see how you and your cohorts graduating around the country will do better.”

The Lutheran pastor insisted, “The fruits we produce are not Mennonite grapes and Lutheran grapes packaged for our own constituencies. You have received your inheritance for others, for the sake of shalom in the world.”

The author of Breathing Space: A Spiritual Journey in the South Bronx, a book used in several AMBS classes, concluded with a reminder from John 15, quoting the verses in which Jesus says that he is the vine and those who remain in him will bear fruit.

The painting that served as a backdrop for the commencement service at College Mennonite Church, Goshen, was commissioned by the graduating class as a gift to the seminary. It was created by Rosanna McFadden, an artist who is a member of the class and a pastor at Creekside Church of the Brethren in Elkhart.

The six Canadian graduates are:

Alicia Buhler with a Master of Divinity with a concentration in pastoral care and counseling. She will complete additional studies in chaplaincy, pastoral counseling and Gestalt Pastoral Care before returning to Canada to pursue an assignment in spiritual care. Alicia is a member of Pineridge Fellowship Chapel, Hudson Bay, Sask., a congregation in the Evangelical Mennonite Conference. Her parents are Fred and Irene Buhler of Hudson Bay.

Virginia Gerbrandt with a Master of Divinity degree and is pursuinga pastoral ministry assignment. Virginia is a member of North Leamington United Mennonite Church, Leamington, Ont. Her parents are Esther and Gerald Gerbrandt of Winnipeg, Man.

Christine Kampen with a Master of Arts in Christian Formation with a concentration in Christian spirituality. Christine is interim pastor and member of the pastoral team at Highland Community (MB) Church in Abbotsford, B.C. She is the daughter of John and Betty Kampen of Abbotsford.

Carrie Martens with a Master of Divinity degree and has been invited to co-teach the AMBS course Human Development and Christian Formation this fall. She also will volunteer at Belmont Mennonite Church in the area of Christian formation. In December Carrie will return to Canada to pursue a pastoral ministry placement. Carrie is a member of Bergthaler Mennonite Church of Altona, Man., and her parents are Rudy and Edna Martens of Altona.

Miles Reimer with a Master of Divinity degree and will continue as associate pastor of First Mennonite Church of Hutchinson, Kan. He is married to Kathy Landisand is the son ofMarie and Peter Reimer of Winnipeg, Man.

Three special notes of recognition were included in the commencement service. Marlene Kropf was recognized as she retires from teaching after 25 years. David L. Habegger was recognized as the recipient of the 2011 Alumni Ministry and Service Award. Ervin and Erma Steinmann of New Hamburg, Ont., were present at the service and were recognized as the donors who provide the gifts of small brass bells that graduates receive each year, bells that are replicas of the Wadsworth Institute bell that is now on the AMBS campus.