December 10, 2014 | God at work in the Church | Number 24
Story and photo by Donna Schulz | Saskatchewan Correspondent 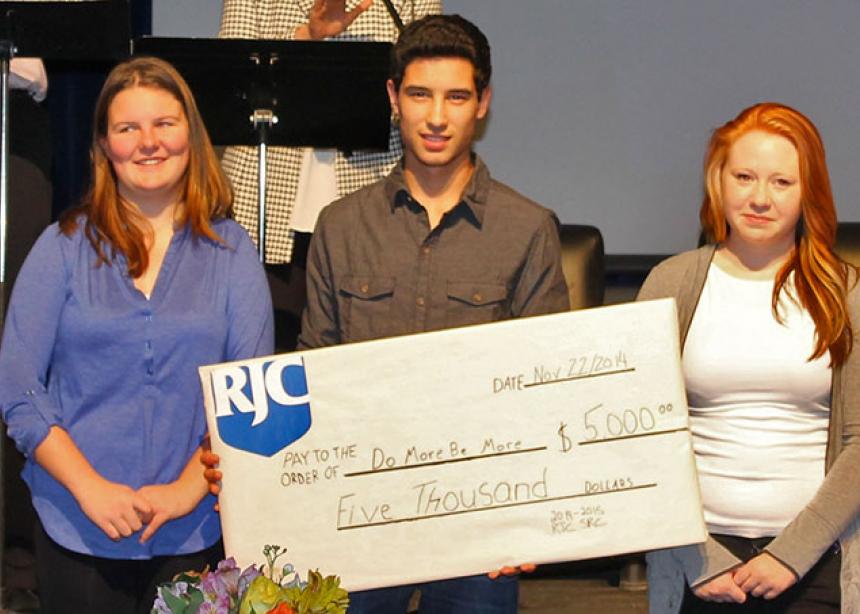 “Do more. Be more.” These words sound a little like the mantra of a motivational speaker. They are, in fact, the name given to a new five-year strategic fundraising plan for Rosthern Junior College (RJC). The plan includes the ambitious goal of raising  $1.5 million to be allocated toward three clearly defined strategies:

Encouraged by increased student enrolment and a projected budget surplus, board chair Tammy Forrester and vice-chair Peter Hooge unveiled the plan at the school’s corporation meeting and again at a fundraising and appreciation dinner. Both events were held at the school on Nov. 22.

“As a board, we look forward to the path that we are walking with enthusiasm and interest,” said Forrester in her report to the corporation. “[We know] that it will not be easy nor straight, but the rewards for RJC in the end will be worth the road taken.”

RJC student council representatives presented the board with its first donation toward the “Do more. Be more” campaign: a cheque on behalf of the student body for $5,000.

No strangers to doing more and being more, the three featured speakers at this year’s banquet, all with connections to RJC, were each named to CBC Saskatchewan’s Future 40 List, which identifies men and women under 40 years of age who are making a difference in their communities. Using a late night television talk show format, dubbed “Menno-Nite Late Night,” teacher Ryan Wood interviewed the three guests:

More than 200 supporters braved wintery weather to attend the dinner, bid on a variety of silent and live auction items, enjoy the musical stylings of siblings Leah and Philip Klaassen, and be inspired to do more, be more and give more on behalf of the school.