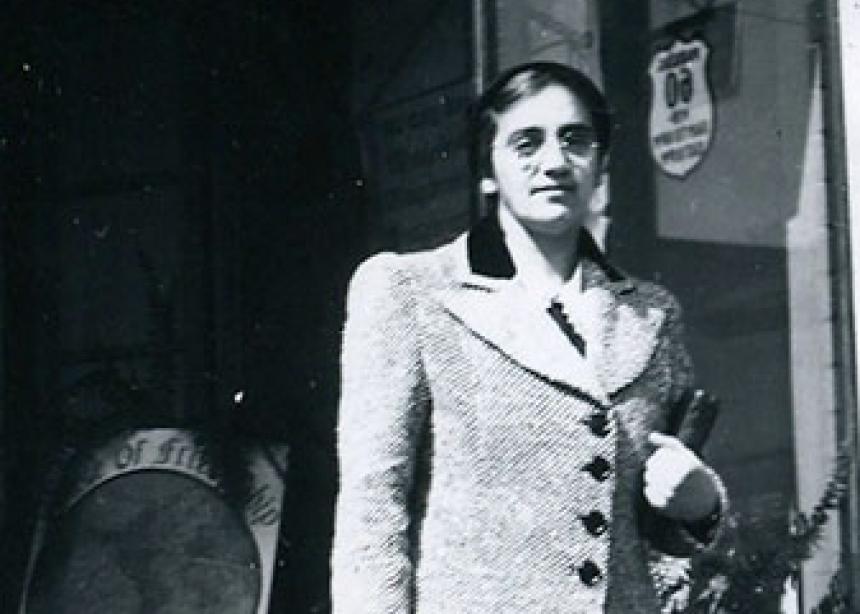 Ilda Bauman in the early 1940s in front of The House of Friendship for all the Nations on King Street in Kitchener, Ont.

A paper cut-out of Joseph Cramer has stood prominently at the many House of Friendship (HoF) events during the Kitchener-based social agency’s 75th-anniversary year. The implication of this is that somehow Cramer was the founder or instigator of the work done by HoF, masking the fact that women played a prominent role in founding, running and supporting the agency’s work from the very beginning until the present.

But at the 75th annual meeting on June 17, HoF moved to right an historical wrong. HoF began as an idea in an ecumenical women’s Bible study group in 1938. They met to study and pray for the needs of the men they saw on the streets who were willing to work but unable to find full-time or long-term employment due to the Great Depression.

One of these women was Ilda Bauman of the Erb St. Mennonite Church in Waterloo. When Cramer was hired, she worked alongside him as a cook and visitor. There were some who considered her the heart and head of the organization, with Cramer being the public face. Her signature appeared alongside Cramer’s on documents and contracts, making her at least his equal, if not the actual head of the organization.

But when Cramer died in 1949, the all-male advisory committee did not consider Bauman as a replacement for Cramer. Instead, they gave her $65, a month’s salary, to “help toward your waiting on the Lord for your next move,” according to author Ferne Burkhardt in A Mighty Flood: The House of Friendship Story.

As Christine Rier, HoF’s development director, said at the annual meeting, “It was a bitter end to her generous service and her rejection may have contributed to the ill health which plagued her for the rest of her life. About 10 years later, she suffered a stroke, which paralyzed her and kept her in Scott Pavilion for 13 years. Ilda was moved to Sunnyside Home in Kitchener, where she died in 1974.”

Bauman was posthumously awarded the Buhr Friendship Legacy Award, named after Martin Buhr, a former director of HoF. At the annual meeting to receive the award were three of Bauman’s relatives: nieces Sharon Reimer and Mary Lynn Dedels, and nephew Ken Bauman.

To read more about the House of Friendship's 75th anniversary, see Listening to those being served.

Ilda Bauman in the early 1940s in front of The House of Friendship for all the Nations on King Street in Kitchener, Ont. 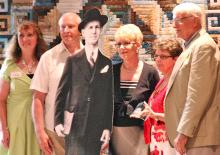