What might the mother of Jesus mean for Mennonites today? 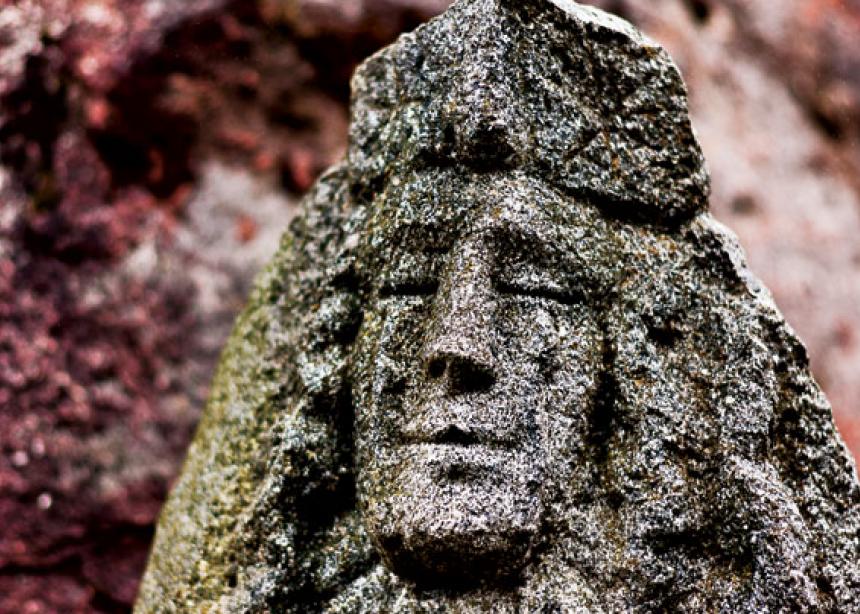 After two days of singing, discussing, pondering images and praying last month, questions continued to swirl around Mary, the mother of Jesus, and what she might mean for Mennonites and Anabaptists today.

The “My Soul Rejoices in God, my Saviour: Mary in Anabaptist Dress” Conference at Associated Mennonite Biblical Seminary brought together approximately 100 pastors, artists, musicians, storytellers, spiritual directors and scholars to begin conversations about the place Mary has had in Mennonite and Anabaptist faith and how that might be changing.

AMBS president Sara Wenger Shenk opened the event with the declaration: “I am grateful to be part of a learning community belonging to MC U.S.A. and MC Canada that has the courage to invite us back into our own history, and into the Scriptures, for a fresh look at the treasure that is there in Mary’s story.”

Mary H. Schertz, AMBS professor of New Testament, presented a biblical survey of Mary. “We hear a longing for Mary,” she said. “We need to attend more carefully to this enigmatic woman. We begin, as Anabaptists do, with the Mary we encounter in the Scriptures.”

Biblical accounts, particularly those in Luke, depict Mary as a woman of courage. She accepted God’s invitation to be the mother of Jesus, acting against the expectations of her betrothed, her family and her culture. “Mary said ‘yes’ boldly and with confidence,” Schertz explained.

However, it is the Magnificat, Mary’s song in Luke 1, that is the most revolutionary. It is, in fact, so revolutionary that it is viewed as dangerous by some oppressive governments, Schertz pointed out. Mary is a poor young woman caught in a quandary not of her own making, but she sees her out-of-wedlock pregnancy as good news, not only for herself but for all people.

John Rempel, AMBS professor of theology and Anabaptist studies, next examined how the Reformers of the 16th century viewed Mary. Affection for Mary carried forward into most Anabaptists’ faith, Rempel pointed out, but “first-generation Protestants were concerned to think of Mary in her relationship to Christ, rather than as co-mediator of salvation.”

One area in which Rempel called for further exploration is belief in the communion of the saints. “The saints in God’s presence are now so at one with God’s will that they pray with us for God’s purposes to be realized in our lives,” he said. “The saints pray with us, not because we appeal to them, but because they now unreservedly will what God wills.”

Re-examination of this teaching is a necessary theological starting point for a reappraisal of Mary’s place in the Mennonite church, Rempel said.

Wendy Wright, professor of theology at the University of Creighton, Omaha, Neb., looked for commonalities between the Catholic devotion to Mary and significant elements of Mennonite and Anabaptist faith. Three of these are:

Wright emphasized that a template of discipleship is present in Mary, who said “yes” to God and was moved to go to visit Elizabeth, sharing her news. “When we are open to God—open to the ‘yes’—we intrinsically visit” others, Wright pointed out.

Elizabeth Soto, ordained minister in the Colombian Mennonite Church, reflected in a more personal way on how Mary has been important in her spiritual journey, beginning in her early life as a Catholic. She recognized that in Mennonite congregations today there may be little room for an appreciation of Mary.

However, Soto confessed that she sees a need for more female images in the church to nurture Mennonite spirituality. “We have thrown out the basin with the bathwater,” she said. “We have kept Jesus,” but not the womb that bore him, the woman who created with God. By so doing, the church lost valuable perspectives that can help it to know and follow Jesus.

The last session of the conference gave a panel of four participants an opportunity to continue questioning what Mary might mean for Mennonites. Irma Fast Dueck, professor at Canadian Mennonite University, Winnipeg, Man., said, “The conference has given evidence to our yearning and thirsting for the gifts that Mary has given the church over the centuries—her understanding of suffering and love.” But Fast Dueck asked how the Mennonite church can separate Mary from the ways it has come to see her in Catholic settings in order to connect with her in ways that are meaningful and fit with Mennonite faith.

In the discussion that followed, several participants called for a new appreciation of the communion of the saints, recognizing that those who have died are companions on the journeys of those still living. A step for Mennonites toward appreciating Mary might be placing her in this context of people who can be seen as models for faith. 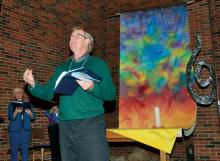 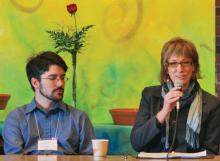 Panelist Irma Fast Dueck of Canadian Mennonite University, Winnipeg, Man., right, said, “We have only a few biblical accounts of Mary. That’s a blessing. We have to use our imaginations to shape our image of Mary that has an Anabaptist-Mennonite sensibility.” The panel included Adam Tice, associate pastor of Hyattsville Mennonite Church, Md., left