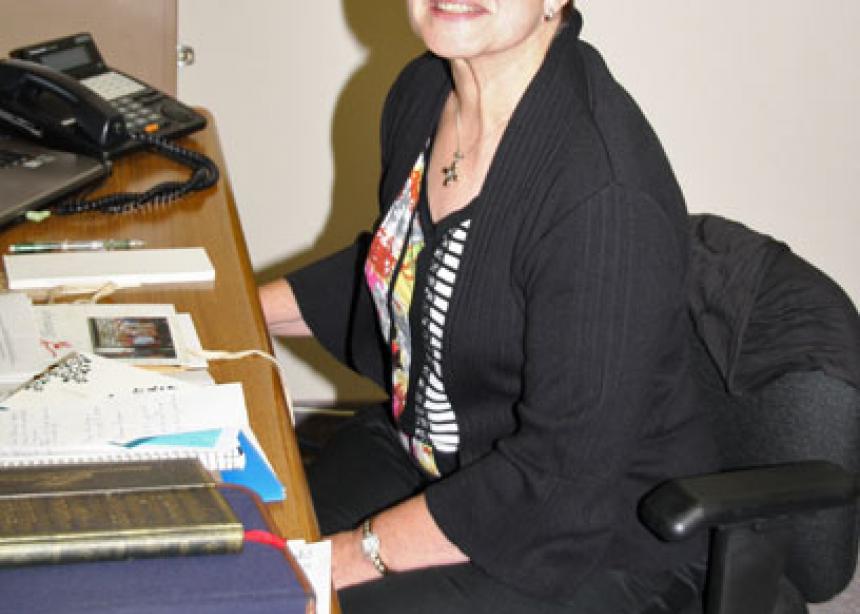 Muriel Bechtel, retiring this summer after 12 years as Mennonite Church Eastern Canada conference minister, is pictured in her office, familiar to many pastors through the years.

After 12 years as Mennonite Church Eastern Canada’s conference minister, Muriel Bechtel will be moving into retirement this summer. On June 24 she also celebrated 20 years since her ordination, when she was pastor of Warden Woods Mennonite Church, Toronto.

As she looks back on her years of ministry in a variety of celebrations in her last active weeks, she notes a significant shift that has happened to her over the years. “Earlier on, I would celebrate successes with an ‘I did it’ attitude,” she says. But as the years have gone on, influenced by her spiritual directors, retreats, prayer life and God, she has more and more seen God as the source of success, bringing together disparate elements and people to make a whole.

While she has been praised for the success of MC Eastern Canada’s Transitioning into Ministry (TiM) program, she remembers Marilyn Rudy-Froese, then chair of the area church’s Leadership Council, commenting, “When you and Marianne [Mellinger] bring ideas to the table, I don’t know which of you was the instigator.” Bechtel sees such cooperative work being arranged by God, a kind of divine synergy.

Like other women of her era, Bechtel turned her gifts of ministry to nursing in the early years, working as a public health nurse in Cambridge, Ont. This familiarity with the community led her to leadership roles in Preston Mennonite Church a few years later, as the congregation worked with the Langs Farm Village Association to assist mothers and families.

During this time, she also took victim-offender reconciliation training. A move to Toronto in 1983 opened the possibility of studying at the Toronto School of Theology, where she finished her master of divinity degree at Emmanuel College (United Church of Canada).

While she thought she was headed into chaplaincy work, she was asked by leadership at Warden Woods Mennonite Church to consider becoming its pastor. “People had to persuade me to go,” she remembers.

The move 12 years later happened in a similar manner when the MC Eastern Canada search committee encouraged her to apply for the position of minister of pastoral services, later renamed conference minister.

A key part of Bechtel’s style over the years has been depending on supports. She credits her husband Dave Bechtel, but has also sought the help of spiritual directors, a variety of coaches, and the circles of conference ministers in Canada and the U.S. At a seminar on boundary care two years ago, one she was attending as a participant, not as a leader, she remarked that no matter how many such seminars she has attended, there is always something to learn or a detail that needs attention.

Reflecting on the changes over the past 12 years, and looking ahead, Bechtel is reminded of Paul Martin, a recently deceased MC Eastern Canada pastor, who spoke of “climbing down the ladder” in the last years of his life: leaving active ministry, moving from his house into an apartment and eventually into a nursing home room, losing abilities along the way while losing visibility in the community at the same time.

Bechtel sees pastors and churches losing their formerly privileged places in communities and believes that this loss is not finished. Churches and church leaders will become more marginalized yet, she believes. In this time, pastors and congregations need to “go deeper” into spirituality, getting closer to the vine, referring to John 15.

She also sees struggles ahead for the church, as traditional/ethnic Mennonites interact with new Mennonites. Some of these struggles will be around the person of Jesus and his continuing importance for Christians, the meaning of Jesus for salvation, and how to continue to work and worship together in the church when different answers to these questions are presented.

Other challenges for leaders are the alien culture in which they live, the culture of busyness, many ethical questions around the beginning and end of life and sexuality, parishioners’ expectations, and wondering whether missional thinking and practice could just make pastors even more busy, rather than freeing them to depend upon God.

But her sense that God is the one at work, pruning the church and the individual, and leading the people of God forward, gives her hope for the church’s future.

In retirement, she and her husband plan to spend time with family, including grandchildren. Beyond that, she is open to the leading of the Holy Spirit—or “Lady Wisdom”— for guidance. She plans to follow the advice given her: “It will take you a year or two to see how your role shaped you and to find who you are without the role.” 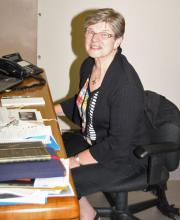 Muriel Bechtel, retiring this summer after 12 years as Mennonite Church Eastern Canada conference minister, is pictured in her office, familiar to many pastors through the years.