Although sailing troubled waters over the past 50 years, Mennonite novelists have taught Mennonite readers how to approach their texts with boldness and humility as “we learn more about ourselves through their works of art,” Paul Tiessen said last month in wrapping up a nine-week series of lectures by Mennonite writers at Conrad Grebel University College.

Tiessen, professor emeritus of English and film studies at nearby Wilfrid Laurier University, attempted to analyze the “structural relationships between individual identity and that of the Mennonite communities about which they write,” by looking at three different groups of readers: those who were against the themes presented, those who were in favour, and the marketers anxious to “maximize the stories” for the greatest impact.

Using Rudy Wiebe’s first and most famous novel, Peace Shall Destroy Many (1962), and Miriam Toews’ later novels, A Complicated Kindness (2004) and Irma Voth (2011), Tiessen chronicled the reactions in the Mennonite Brethren commu-nity to Wiebe’s novel and showed how the protagonist Irma Voth in Toews’ novel came to a redemptive stance about her struggles in an Old Colony Mennonite community in Mexico.

At the outset of his talk, Tiessen credited Miriam Maust, who, 35 years ago, told him it was “time to bring Mennonite literature into the Mennonite consciousness, so as to not allow theologians and historians to dominate our thinking,” but he also, with some emotion, credited his wife, Hildi Froese Tiessen, the creator and moderator of the writers series, with bringing Mennonite writers to the forefront.

The first group—those “against”: primarily Mennonite Brethren and many “non-readers”—were significantly traumatized with Wiebe’s telling of the story of a small Mennonite community in Coaldale, Alta. Although Wiebe was praised for his courage by the “English literary iconoclasts” in exposing the foibles of this strict, religiously controlled community, his own people were “deeply troubled,” according to Tiessen, who said it caused a “firestorm, deep trauma, a ruckus,” both in his home community and, indeed, in the entire Mennonite Brethren religious establishment.

It was something for which the young 28-year-old writer was not prepared, Tiessen said, resulting in his termination as editor of the denomination’s national publication, the MB Herald, and condemnation from pulpits and leaders who referred to it as “filth that plasters our young people with shame.”

On the other hand, several like-minded young people like Jack Dueck, revelling in the newfound relationship between “power and language,” aided and abetted Wiebe’s efforts by writing a column, “As I see it,” under the pen name of Petronius. And John Rempel, now teaching at Associated Mennonite Biblical Seminary, Elkhart, Ind., was so gripped with Wiebe’s narrative as a high school senior in Ontario, that he told his friends that finally “someone was audacious enough to confront the storyline we all grew up with.”

Finally, Tiessen said that marketers for the publishers could hardly contain their glee in commercializing a story and an iconoclastic novelist they described as a “young theologian who writes of prejudice and bigotry erupting to destroy the people of a small Canadian community.”

With this kind of “circus advertisement,” he asked if it was any wonder that the book was such a threat to Mennonites in a small prairie community. It became a cautionary tale and a “trouble spot” to the religious community when their story became a commodity and they were propositioned and eroticized to sell books.

Despite these “ragged, vehement and free-for-all forces that fed the firestorm,” Tiessen concluded that the story needed to be written to “tell us something about ourselves,” however painful it was for both the subjects and the readers.

Miriam Toews, coming along decades later and also writing about her Mennonite home community of Steinbach, Man., realized, Tiessen said, that she would “have to rid herself of her anger and the rigid moral codes with which she grew up.” While recognizing the “excruciatingly powerful forces of unforgiving fundamentalism that is unmoved by empathy and goodwill,” he said she processed all this in A Complicated Kindness through humour.

Quoting Margaret Loewen Reimer in an August 2004 Canadian Mennonite book review, Tiessen referenced a Globe and Mail interviewer who opened her piece with, “Who knew Mennonites could be so funny? It’s one thing to expect the followers of Menno Simons to produce heavyweight, serious writers such as Rudy Wiebe. But then there’s Miriam Toews.”

Through both Wiebe and Toews, Tiessen concluded, Mennonites have been taught to read these texts “with commitment and grace, recognizing both the limits and infinite horizons of a work of art—always something provisional, not absolute. . . . These are stories with multiple identities that stay in conversation with each other, whether alone or in community, responding and being responsible for each other.” 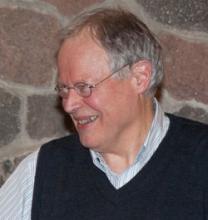