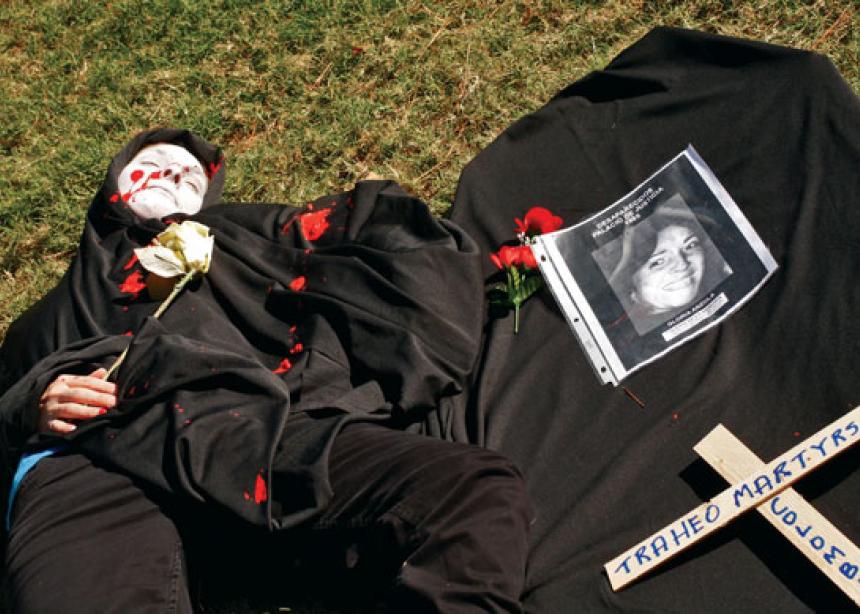 Josie Winterfeld, missions, peace and justice worker at Stirling Avenue Mennonite Church, Kitchener, Ont., participates in the ‘die-in’ during the annual peace protest outside of the former School of the Americas at Fort Benning, Ga.

Fort Benning, Georgia—the home of the Western Hemisphere Institute for Security Cooperation, formerly the School of the Americas—is also the home of annual peace protests each November.

Three Waterloo Region Mennonites—Nathan Gorvett, Josie Winterfeld and Richard Albrecht—took part in the 2010 protest, which stretched over a three-day weekend.

A highlight for Albrecht was the “die-in.” While the names of victims of those trained at the institute/school were read, the protesters marched in front of Fort Benning’s gates. Some protesters, dressed in black and carrying coffins, “died” in front of the gates. The fact that it took over an hour to read all of the victims’ names astounded Albrecht.

The whole experience of being at the protests felt risky to him. He was outside his usual middle-class comfort zone. In Waterloo, Ont., the police are there to defend him and make things safe for him. But at the protest he was seen by the police as someone on the other side of the line, outside accepted practice and belief.

He felt solidarity with the poor, those on the wrong side of power imbalances, and at risk of arrest, as happened to a Russian news film crew and others who were picked up by police while following orders to disperse.

Albrecht found it ironic that the police were “defending” a U.S. army base from pacifists, whose leaders encouraged the protesters to remember that the police, as well as the trainers and students at the institute, were also human beings worthy of respect.

Nov. 16 is the anniversary of the murder of six Jesuit priests, their housekeeper and her daughter by the Salvadoran military on the campus of the University of Central America in San Salvador, El Salvador, in 1989; the six had been labelled as subversives by the government. A United Nations panel concluded that 19 of the 27 soldiers were graduates of the School of the Americas.

Heavily criticized even within the U.S. government, the name change to the Western Hemisphere Institute for Security Cooperation was, for many, a smokescreen. U.S. Army Maj. Joe Blair, a former director of instruction at the school, was quoted in the San Francisco Chronicle: “There are no substantive changes besides the name. They teach the identical courses that I taught, and changed the course names and use the same manuals.”

Josie Winterfeld, missions, peace and justice worker at Stirling Avenue Mennonite Church, Kitchener, Ont., participates in the ‘die-in’ during the annual peace protest outside of the former School of the Americas at Fort Benning, Ga.