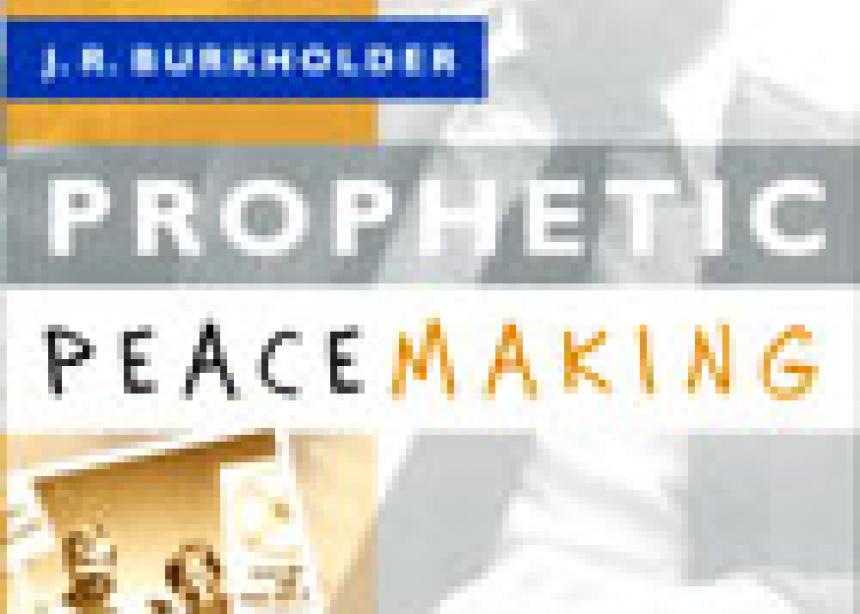 It was January 1989 when J. R. Burkholder taught liberation theology at Associated Mennonite Biblical Seminary, Elkhart, Ind. Interterm at AMBS is one course, usually studied over 13 weeks, compressed into less than three, including all the lectures, readings and assignments. In Burkholder’s class, students were encouraged to find a way to apply the learnings of the mostly Roman Catholic Latin American theologians to issues of peace and justice in North America.

As the book of selected writings, Prophetic Peacemaking, shows through its biographical and published material, Burkholder lived what he taught, questioning deeply our Mennonite involvement in North American culture.

One afternoon during the course we watched the movie The Mission (directed by Fernando Ghia, 1987). Describing the historical destruction of Christianized indigenous people in what is now Paraguay by Christian mercenaries in the 17th century, the movie struggles with questions about who to obey: God, or God’s ordained government and church?

In Burkholder’s essay in the March 1987 issue of Christian Living, he examines the movie’s issues carefully, but then moves powerfully into how we, too, face such issues now. Do we give in to our culture, government and churches, or do we examine them as individuals and groups, seeking to obey a higher calling?

The 29 other essays cover pacifist convictions, Christians and the state, Mennonite social ethics, religion and culture, and “On loyalty, faith and discipleship.” A closing essay on “Lessons learned on the way toward peacemaking” describes his many decades in the classroom and pulpit, working to train lay people and pastors in the gospel mandate for peace and justice.

Although Burkholder has not been a big name through the years, his influence on many to consider God’s option for the poor and powerless is immeasurable. I, for one, left his class changed, thinking about how in the church and commu-
nity of Christians we have much to learn about justice, peace and righteousness.

This volume is a trip through Burkholder’s life, dipping into the many essays, sermons and articles he has written to move the hearts of Mennonites and others to join God’s heart in peacemaking.