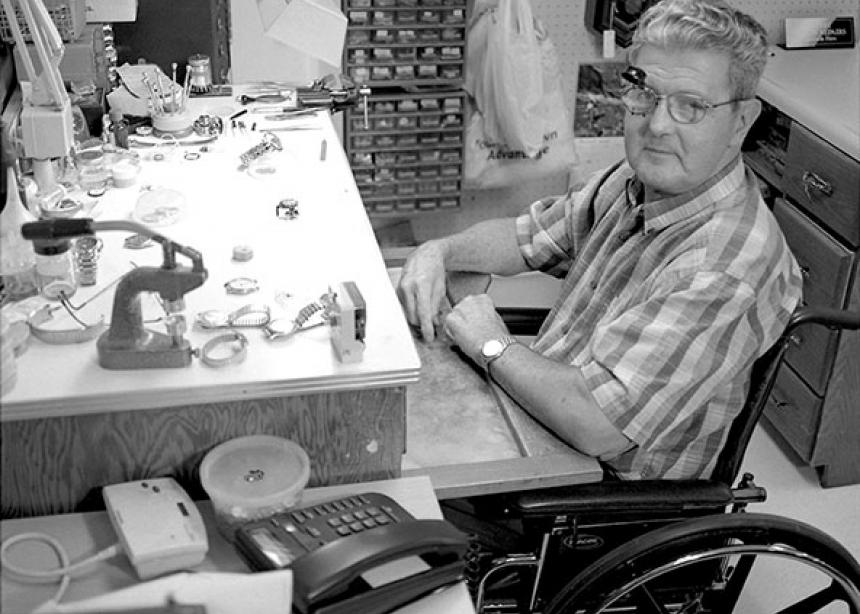 Aden Bauman sits at his home work bench after retiring from 46 years of running a watch repair business. His photo and story are part of the ‘Portraits of perseverance’ project by Karl Kessler and Sunshine Chen. (Credit: Karl Kessler)

Karl Kessler and Sunshine Chen openly admit to being inspired by Harvey Wang’s New York, a 1990 book of photographic “portraits of men and women in vanishing jobs and professions.”

Kessler and Chen decided that there was ample material for a similar project in Waterloo Region. What developed over six years was “Portraits of perseverance,” a show of more than 50 black-and-white portraits and profiles of women and men who have “outlived an era,” in the words of Kessler, a member of Erb St. Mennonite Church in Waterloo. Chen frames each profile—on display in the City of Waterloo Museum at the Conestoga Mall until Jan. 30—with quotes from the subject of the photo.

Photos of rubber and garment workers, both once major Waterloo Region industries now shrunk to small plants with a few workers, are side by side with watch and typewriter repairmen; a shoemaker and urban farmer; a plasterer; the owner/operators of Budd’s, an independent department store; and an independent corner store owner.

In profile after profile Kessler notes the ways in which the professions built or continue to build community. People drop by the corner store to catch up on gossip and leave without buying anything. The shoemaker speaks of how both rich and poor come to him to have their footwear repaired.

Several Mennonites show up in the se-ries, including Aden Bauman of Elmira Mennonite Church, who is a watchmaker. Disabled, he trained in a profession that allowed him to work with just his hands, although a debilitating disease is hampering that now too. He began fixing watches when he was 21 and “retired” to a home shop 46 years later.

He told Chen and Kessler: “I went to Toronto to a school for handicapped boys. I wanted to be able to earn a living for myself, and I went down there and they had different options, so that’s what I got into. . . . I did alright. I survived, anyway. . . . I didn’t want to go to the government for support. And I supported myself, and I got married and had two boys, and I supported them too.”

Like others, Bauman waxed philosophical when interviewed: “Time is going too fast. . . . I still remember who I sold my first two manual-wind watches to. And the first automatic watch that I ever sold.”

One of Kessler’s favourite subjects was Joe Kelly. As the one who keeps the me-chanical town hall clock in Elmira running, he told Kessler: “We worry so much about tomorrow and we should just live in today. Tomorrow we’ll have enough worries. Today is precious.” 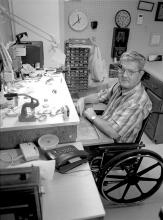 Aden Bauman sits at his home work bench after retiring from 46 years of running a watch repair business. His photo and story are part of the ‘Portraits of perseverance’ project by Karl Kessler and Sunshine Chen. (Credit: Karl Kessler) 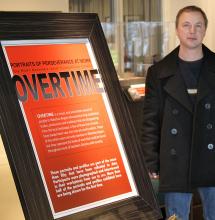 Photographer Karl Kessler of Erb Street Mennonite Church, Waterloo, Ont., stands in the City of Waterloo Museum at the Conestoga Mall, where his and Sunshine Chen’s ‘Portraits of Perseverance’ are on display until Jan. 30. (Credit: Dave Rogalsky)