From pew to pulpit to pew

July 24, 2013 | God at work in Us
By Evelyn Rempel Petkau | Manitoba correspondent 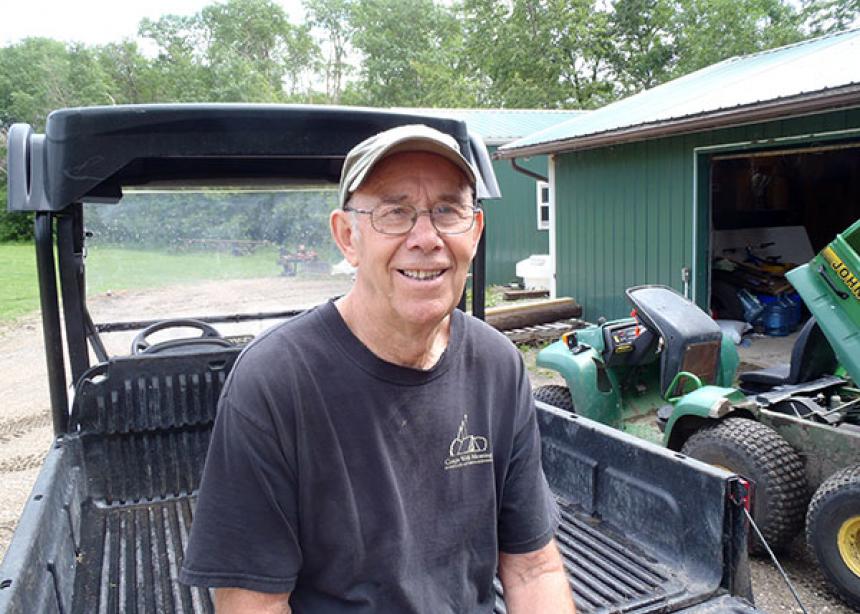 Jake Neufeld continues to volunteer much of his time with maintenance work at Camp Koinonia.

Jake Neufeld, lay minister for 46 years, was released from his ordination to ministry last October in Whitewater Mennonite Church in Boissevain. Neufeld leaves ordination behind with a grateful heart for the life-changing course it set him on.

Neufeld was born in 1936 into the community and the church that he lives in today. He married Wanda Peters in 1958 and farmed on the home place. Here they raised their two sons, Murray and Randy, and continued an active involvement in the church.

In 1965, “like a bolt out of the blue,” he was nominated to become a lay minister. “I wasn’t expecting my name to be there,” said Neufeld who felt his grade 9 education and limitations in High German made him inadequate for the job. “My theological/biblical education came from Sunday school and the German church services in Whitewater Mennonite.”

“I did not feel capable, but God would not let me withdraw my name. I believed then and still do that the church is the body of Christ in the world and that Christ calls us to service through the church, so I felt I couldn’t say no. I knew I was in over my head. It meant taking time out of farming to do the work of a minister. . . . This was a big step but I had support from friends and especially from our church leaders.”

Neufeld tried to bargain for a shorter term and then have the position reviewed, but soon realized that ordination was understood to be for life. In September 1966 Neufeld was ordained at Whitewater Mennonite by Elder Jake Harms.

Neufeld recalls lay ministry as a growing experience that at times was very uncomfortable. “It took a lot of God’s grace, a lot of depending on the Holy Spirit working in my life and a lot of mentoring from two of my favourite ministers, Elders G.G. Neufeld and Jake Harms. Without their example and support I would never have survived those first years.”

Neufeld’s ministry at Whitewater was interrupted by a call to serve a term with the Conference of Mennonites in Manitoba in the northern First Nations community of Little Grand Rapids. When they returned to Boissevain three years later, “We came home changed people.” Time and relationships had become much more important and although they tried to get back into farming, they felt their hearts were no longer in it. After four years of struggle, they accepted the position of camp managers at Camp Koinonia. “It was during this time, 1981, that Wanda was diagnosed with breast cancer. The next five years were filled with chemo, radiation, hope and dashed hopes. She passed away at age 48 and I moved back to the farm.”

“My ministry changed, especially my involvement in funerals. I believe I had to go through my own loss and grief and mourning to understand what families experienced in their loss. But what a price to pay.”

“At this time Whitewater was going through changes. Many wanted a trained, hired pastor . . . It was a time of trial and error. A number of pastors were called, some could not complete their term because of friction and disagreements . . . It was a hurting time. Too often my role was the ‘go-between’ the pastor and congregation, a no-win situation.” Eventually Neufeld was hired as half-time interim pastor. Neufeld saw it as a time for the church “to heal hurts and learn to accept a new system of leadership.”

“In 1991, Anne came into my life and a year later we were married. . . . I learned to pull back from active ministry when a new pastor came into our church. It was easy to work this out with the pastor but much more difficult to do so with the congregation. Many wanted to fall back to the old multi-minister lay system, especially for funerals and weddings.”

Neufeld’s request to be released from ordination came with the realization that leadership in the church has changed. “In 1966 ordination was required for preaching, serving communion, baptizing, officiating at weddings and funerals, but that is no longer the case.” 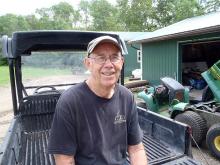 Jake Neufeld continues to volunteer much of his time with maintenance work at Camp Koinonia.