People of faith must call for climate justice

January 4, 2012 | God at work in the World | Number 1
By Rachel Bergen | National Correspondent 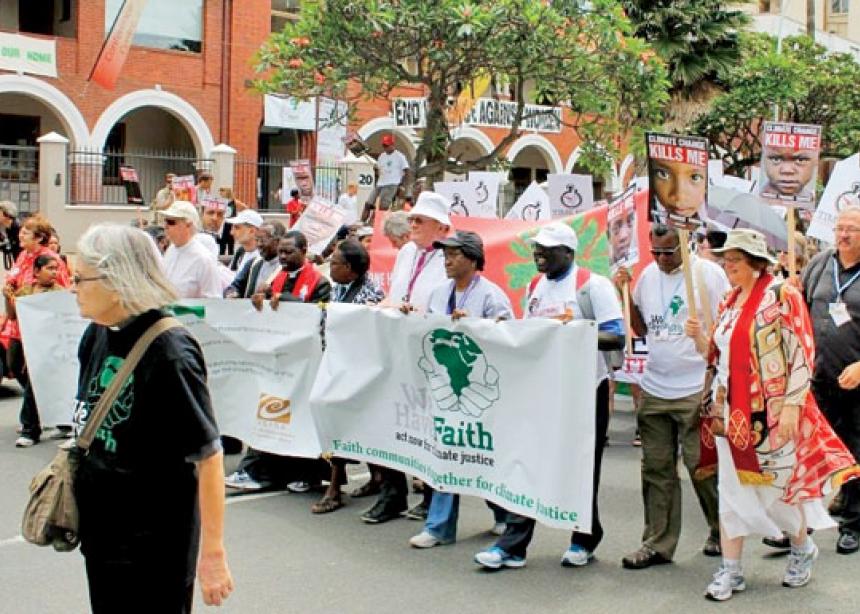 Especially in the colder areas of Canada, people will sometimes facetiously say they are thankful for climate change when they experience unseasonably warm temperatures. But Willard Metzger, Mennonite Church Canada’s executive director, heard first-hand how destructive climate change is in developing countries at the 2011 United Nations Climate Change Conference in Durban, South Africa.

The conference brought together governments, climatologists and civil society organizations—as well as faith groups—from all over the world.

Metzger has spoken up about climate justice in the past (see “Metzger’s address on climate justice warmly received,” Dec. 19, 2011, page 27). This passion caught the attention of Mardi Tindal, moderator of the United Church of Canada, who extended an invitation to Metzger to be a part of the conference alongside the World Council of Churches (WCC). This was significant, as MC Canada is not a member of the WCC and is a relatively small player on the world church scene.

Tindal and Metzger were observers to the negotiations. “By our presences, we articulated that this is a concern,” Metzger said upon his return.

Before leaving for South Africa, Metzger invited Mennonites to express their concerns about climate change, so that he could pass them on. One person suggested adding an extra fee on vehicle purchases as well as two additional cents a litre at the gas pump.

People living in island states such as Fiji are losing homes and livelihoods as sea levels rise, the conference heard. Somalia reported that, in 2011, 200,000 children died from hunger and 730,000 others were malnourished, citing climate change as the reason for the drought and famine.

These countries and others that spoke at the conference struck a chord with Metzger. “I found it to be more emotionally draining than I had anticipated,” he said. “But the [people listening to speakers from island states] seemed to be completely deaf to this cry for survival.”

This apparent lack of compassion from the world’s governments demonstrated to Metzger that the world’s faith commu-nities must step up to play a greater role in climate justice.

When the WCC asked Peter Kent, Canada’s environment minister, about the role faith communities could play in climate justice, he suggested that they can help by communicating its importance, as the Canadian public appears to not be concerned about climate change, Metzger said.

While the negotiations were long and often frustrating, Metzger said that he can understand the point of view of developing and developed nations. “Every country is looking at their economical interest,” he said. “Major emitters are either very developed countries that are guarding their economic growth in the global climate of uncertainty, or they are developing nations that are looking at growing into a greater market share. . . . Kent is trying to balance the two.”

Metzger hopes that Canada will take leadership and prove itself by voluntarily limiting its emissions. “If they do this, I will feel very good about the process in Durban,” he said.

What was also apparent to Metzger was the irony of dozens of people flying across the world—emitting large amounts of greenhouse gases—in order to partake in conversations about climate change. However, because it was a two-week event, with very intense negotiations going until very late at night in some cases, Metzger felt the trip was justified. “I can’t imagine that level of negotiations happening any other way than face to face,” he said.

Metzger acknowledged the tensions for churches around the world between being more green and carrying on with its more traditional missions. “It doesn’t mean that either of those competing values is more important than the other,” Metzger said, “but we have to figure out an appropriate way forward. . . . If we didn’t have any international face-to-face time [at conferences like the one in Durban, or church assemblies], we’d become very separated from the rest of our global family.”

Grappling with climate justice issues is also a struggle for local churches and congregants who want to be involved in the global church through short-term mission trips, which often involve travel by air, Metzger acknowledged.