Plea for visa advocacy accompanies decision to hold world gathering in the U.S.

May 25, 2011 | God at work in the Church | Number 11
By Byron Rempel-Burkholder | Mennonite World Conference
Taipei, Taiwan 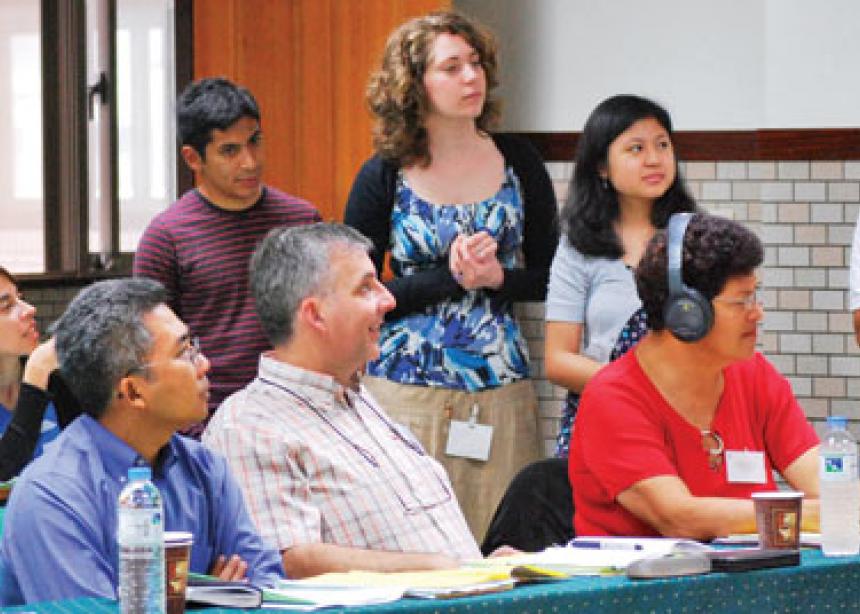 With eyes wide open about the visa challenges faced by international participants, especially youths, the Executive Committee of Mennonite World Conference (MWC) agreed on May 9 to hold the next global assembly in the United Sates in July or August 2015, in Harrisburg, Pa.

The action, taken at the committee’s annual meeting in Taipei, was in response to a formal invitation from MWC’s four member churches in the U.S.: the Brethren in Christ (BIC) General Conference, the Conservative Mennonite Conference (associate member), Mennonite Church U.S.A., and the U.S. Conference of Mennonite Brethren Churches.

After considering an extensive feasibility study by a task force, the committee endorsed the Harrisburg State Farm Show Complex as the assembly venue. The inviting churches will decide between two available dates: July 21 to 26 or Aug. 4 to 9.

The discussion preceding the decision was dominated by concern about the difficulty many global visitors will face in getting visas. Representatives of the Young Anabaptists Network, meeting at the same time as the Executive Committee, presented an impassioned plea that the American churches work hard at advocating for youths who want to attend the Global Youth Summit associated with the assembly, since the U.S. currently places severe restrictions on visitors from many parts of the Global South, particularly those between 18 and 25 years of age.

“U.S. visa refusal is more likely with young people, who may not have significant bank statements or assets to show a steady job or family to come back to,” explained Marc Pasqués of Spain in an interview. Pasqués is the European youth network representative. “Then there is the fact that the vast majority of young people in Africa, Asia and Latin America could not afford to travel overseas.”

“Can people still call it a ‘global’ youth summit when there is a risk that the face of the global church may not be adequately represented [at the youth summit]?” wondered Elina Ciptadi, outgoing Indonesian member of the youth network.

Bert Lobe, North American staff representative for MWC and part of the feasibility group, told committee members that the Harrisburg area is well endowed with Mennonite and Brethren in Christ congregations and institutions, and thus presents rich possibilities for volunteer participation and personal connections. Harrisburg is also close to many historical sites that are important to North American BICs and Mennonites.

In a related action, the Executive Committee also accepted the invitation of MWC member churches in Indonesia to hold the 17th assembly in that country in 2021. Indonesia’s three Mennonite church bodies are home to about 90,000 baptized members.

Members of the Young Anabaptist Network, who met in Taipei at the same time as the Mennonite World Conference Executive Committee, insist that support for global youths in overcoming visa barriers be part of the planning for the 2015 assembly, to be held in Harrisburg, Pa. Pictured from left to right, standing: Young Anabaptists Melani Susanti of Indonesia, Tigist Gelagle of Ethiopia, Rodrigo Pedroza Garcia of Mexico, Kristina Toews of Canada, and Sumana Basumata of India; and seated: Executive Committee members Adi Walujo of Indonesia, Edgardo Sanchez of Argentina, and Sandra Campos Cruz of Costa Rica.