Many students arrive each year from the planet’s most troubled spots, where pain, fear and anger might be anticipated baggage. 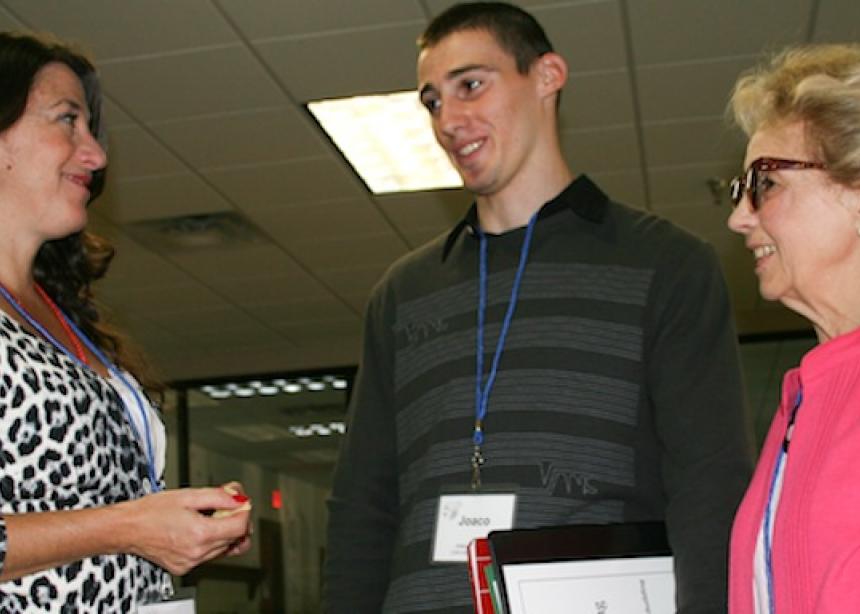 Those entering the opening session of  Eastern Mennonite University’s Summer Peacebuilding Institute (SPI) were handed felt markers and circles of fabric. Their assignment: “Tell what you bring here.”

That Somalian guest’s response seemed typical among the 80 learners arriving from 23 nations for the annual gathering organized by EMU’s Center for Justice and Peacebuilding. From May 9 - June 17, workers in conflict resolution and humanitarian fields will be forming cross-cultural friendships and partnerships while studying aspects of and learning practical skills for reducing  conflict.

Many each year arrive from the planet’s most troubled spots, where pain, fear and anger might be anticipated baggage.

Yet in the opening exercise, students from Nigeria and Sierra Leone said they brought “happiness”; a man from Haiti, “friendship”; a learner from Iran, “love, peace and justice”; a Liberian guest, “excitement.”

“Hope” was a component of many responses hung from a clothesline and spoken to all assembled. “Cheer” was the reply by Rowan Mundhenk, a program coordinator for the past year and a half with Mennonite Central Committee in Cairo.

Mundhenk, an American, is taking one of three new courses offered at SPI -  “Arts and Media-Based Peacebuilding” -- to gain understanding of the social media credited with sparking Egypt’s nonviolent revolution. Although deposed dictator Mubarak briefly shut down Internet and mobile access, Mundhenk says, “From what I heard, it was too late.” Activists, already informed through Facebook and Twitter, had taken to the streets.

Now, Mundhenk added, “No one knows what will happen.” Meanwhile, MCC is “working with local partners to build peaceful relations and help with trauma healing.”

Faisa Loyaan, who works on conflict transformation with non-governmental organizations in eastern Africa, is taking the “Practice” course in peacebuilding skills because “I want to learn some of the tools.”

Although civil war, famine and piracy may be all many Americans hear of her native country, Loyaan, who now lives in Kenya, insists, “It’s a very distorted story, what you see on the news. There are a lot of good things happening in Somalia.”

CJP professor Howard Zehr – who teaches and has pioneered restorative justice – says peacebuilders can get too serious. He promised to bring “a sense of humor.”

Burlando’s three traveling companions include daughter Karina Echazu, a prosecutor who found her earlier SPI study of restorative justice meaningful. She calls the concept, not widely accepted in either American or Argentine courts, “a change that has to be done little by little.” Echazu noted restorative principles can be applied in more traditional criminal-justice settings. She cited a recent pre-sentencing hearing when a child-abuser expressed remorse – which her office in turn reported to the victim’s family.

Burlando operates a center for counseling and interfaith dialogue. Attending her fourth SPI, she also brought a high-school student granddaughter, and grandson Joaco Echazu. He’s studying “Conflict- Sensitive Development,” which he hopes to apply in public-security management as well as mission work.

About half of SPI learners come from North America; the rest from around the world, according to director Sue Williams. Enrollment is down this year, though more arrivals are expected. Williams advised anyone encountering cultural or language misunderstandings to recall their own embarrassing errors, like requesting “a fried umbrella to eat.”

Classes began shortly after voices from 23 nations sang, “The Peace of the Earth Be With You.”

Chris Edwards is a free-lance writer living in Harrisonburg