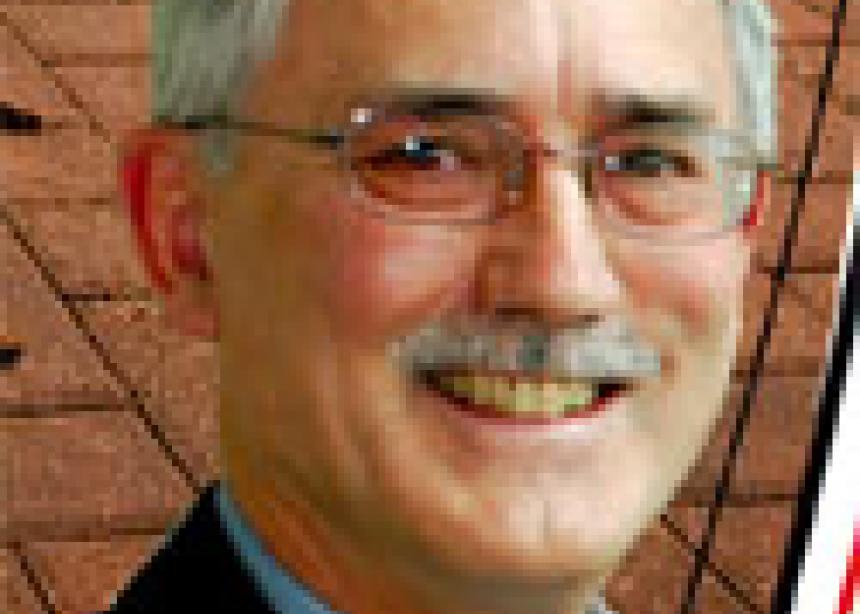 Henry Paetkau strides out of his office to resounding applause.

After all, during his 8.5 years as president of Conrad Grebel University College, resident students have increased by 50 percent, the institution has moved to “university” status, the Masters of Theological Studies degree is now accredited (a move that in turn has brought funding that allows full time students and pastors to study on full tuition scholarships), Peace and Conflicts Studies is poised to establish the first Masters PACS degree, not to mention successful capital campaigns that put the John E. Toews Atrium and teaching space in place and the launching of another building program to provide larger archives and library space, and a centre for community outreach and education. And new teaching faculty have been hired to replace long-term, high profile professors, some of the new instructors themselves being CGUC graduates.

The changes at CGUC over his tenure closely parallel his and the college board’s goals for his presidency. The college is on a more stable financial foundation as a variety of endowments grow, and funding for the new addition flows in. He “leaves the college with a sense of hopeful and growing future.” There have been some “dreams deferred” that couldn’t be afforded now—“a music performance facility, a peace centre for the PACS program and community education, more extensive community education opportunities, and an enhancement of the Mennonite Studies program, . . . given the resources of the materials and the archives and the faculty.”

Paetkau was no stranger to either CGUC, nor Mennonite education institutions at large when he arrived. Born in Volendam Paraguay, he moved with his family to the Niagara area where he attended Eden Christian College. Later he graduated from Canadian Mennonite Bible College and the University of Waterloo, where he was an associate student at CGUC. His doctoral studies in Canadian History were completed there. Later his own children attended CGUC, adding to his experiences as student, board member, and finally president.

Though he had planned on an academic career, when he finished his studies, positions were hard to come by and fulfilling his focus on the church, he took a part time assignment at the Harrow Mennonite Church near Windsor. He stayed there six-and-a-half years, serving at both Harrow and at a church plant in Windsor. From there he went to St. Catharines, Ontario, where he pastored the Grace Mennonite Church for 15 years, until called to be MC Canada’s denominational minister. After 2.5 years in Winnipeg, CGUC called him to lead.

As to why leave now he says, “Sometimes it’s better to leave when things are going well. Many of the goals I’d set for myself and that the board have set have been met or are being met.” Serving CGUC as president has been a dream realized for him, “enormously satisfying and gratifying . . . a privilege.” He is planning a “self-imposed sabbatical” before taking on a new assignment. The last year has been his fullest in his time at CGUC. A holiday to Newfoundland with his wife Leonora and their family is part of the plan.

Paetkau is succeeded by Dr. Susan Schultz Huxman of Wichita, Kansas, completing her seventh year as the director of the Elliott School of Communication at Wichita State University (WSU).  She has held various administrative roles at WSU since 1990, balancing these responsibilities with her passion for teaching.  She began her duties at CGUC on July 4.