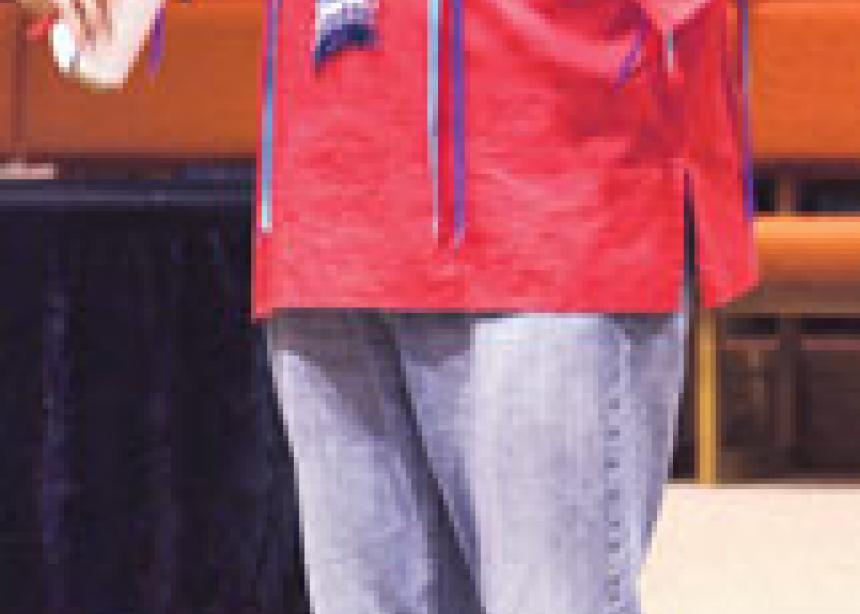 Mitakuye Oyasin (“All my relations”). With these words of greeting, Richard Twiss, a Lakota First Nations speaker, author and “follower of Jesus,” began two evenings of teaching and inspiration in communities in B.C.’s Lower Mainland.

Twiss told stories, often peppered with humour, to explain how First Nations people understand their Creator and the gospel of Jesus with those gathered at the Skwah Band Hall in Chilliwack on March 2 and at Peace Mennonite Church in Richmond the next night. He spoke of the rich heritage that First Nations people are reclaiming after centuries of being “robbed” of it, due to the impact of colonialism, and of how First Nations followers of Jesus are now expressing their faith through pow wows, with dancing and drumming, and in their own languages.

“First Nations culture has an understanding that the Creator put us here not as owners, but as stewards, as hosts,” Twiss said. “Colonials didn’t know how to come as guests; they came as colonizers, going into all the world, not just to bring Jesus, but to bring ‘civilization.’?”

Europeans came to the “new world” with a sense that it was empty and void “because it had no fences,” Twiss said as he shared the history of his family in Catholic-run residential schools and of the pain this had brought to his people. Church was meaningless, Twiss said, noting that he became an angry, wild youth who abused drugs and lived like a beach bum in Hawaii. “I allowed hatred to seep into my soul against white people and Christianity,” he said.

But after a dramatic conversion experience, he began trying to figure out how to be a First Nations person in the context of the church. The message he kept hearing was that, while God loved him, God didn’t like his culture very much: no drums, no button blankets, no totems, no dream catchers, no singing in his own language, because, he was told, “all of that is from the devil.”

And while he believed in Jesus wholeheartedly, there was always something missing for him in worship. “I have grown in my faith in Jesus and in my disillusionment of the church,” he said. It is for this reason that he refers to himself as a “follower of Jesus,” rather than a “Christian,” because the latter term carries too much negative baggage.

Twiss began a ministry called Wiconi International. Wiconi means life in the Lakota language and is based on Jesus’ words: “I have come that you might have life and have it in abundance.” Wiconi International holds inter-tribal pow wows so First Nations people from all tribes have an opportunity to hear the gospel in the context of their culture.

“At the pow wow, we present Christ through traditional song and dance, allowing people to express their love of God in their heart language,” Twiss explained. “The Bible tells us that God will inhabit the praise of his people. This is so meaningful to the people who participate in these pow wows.”

Viewing clips of Wiconi International pow wows and some of their overseas tours, the audiences were able to see first-hand how important music, dancing and artwork are to First Nations people and in expressing their love for the Creator.

“I am hopeful. I believe that God is good all the time,” Twiss said. “”Although we have a lot of history, the story is not over. We have learned that it is possible to love your enemies, to forgive those who have done terrible things to you, and that’s because of Jesus.” He encouraged the church to trust that the Spirit of God was as active in the aboriginal communities as it was in theirs.