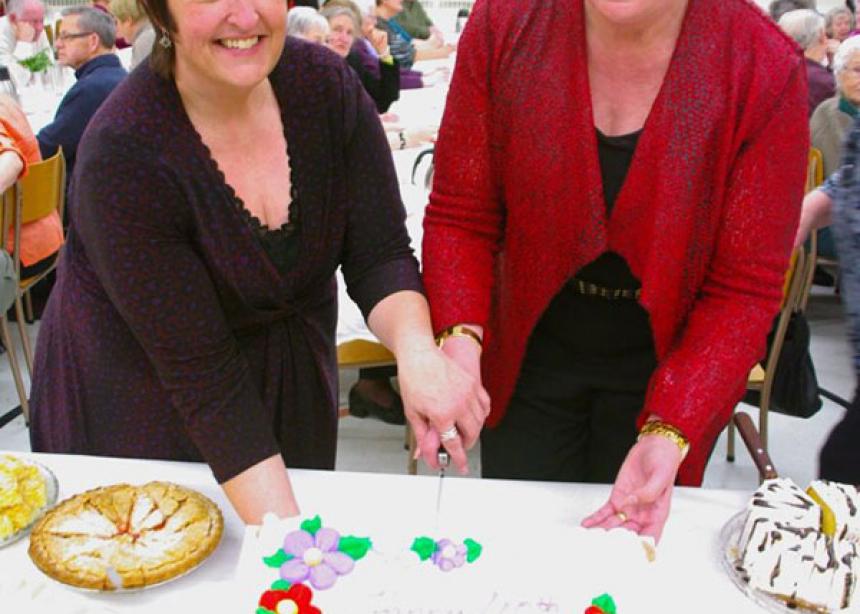 The Niagara-area Mennonite churches celebrated the 40th anniversary of the thrift stores in this area on March 24 with a dinner and potluck dessert. Over 200 past and present volunteers attended. Among those participating during the evening were: Rick Cober Bauman, executive director of MCC Ontario; Patty Ollies, MCC Ontario thrift development officer; Kathleen Leadley, board chair for the thrift store; and Matthew Kok, general manager of the store.

The idea for a thrift store came to Ontario via Olga Rempel who had seen one in operation in Manitoba. The purpose was two-fold—to raise money for MCC and to serve needs in the local area. Individuals from 14 Mennonite and Mennonite Brethren churches in the Niagara area formed a committee, found a property in a low-income area on Pelham Road in St. Catharines, and signed a lease on January 1, 1974.

In 12 days the building was ready for opening under the name of Christian Benefit Shop. Mary and John Harder of Vineland were the first co-presidents. Local Mennonite businessmen and farmers donated all the costs of the rent and utilities allowing the store to give all of the income that first year to MCC.

On November 1975 a second store was opened on Facer Street which relocated in 1977 on the same street. Another move occurred in 1979, and a building expansion took place in 1985. Another move took place in 2003, and in 2009 the idea to combine both stores into one larger store seemed logical. The current store opened at 254 Grantham Avenue in 2010.

Other changes occurred in 2009 with the hiring of volunteer managers Joan and Phil Steininger. Today there are three paid positions: Matthew Kok, general manager; Irene Heyder, assistant manager; and Scott Prince, receiving manager. There are 185 volunteers working at the store, which has computerized pricing and sales in the last six months. In 40 years these stores have contributed $6.75 million to further the work of MCC—to serve those in need.