A new direction for Sam’s Place 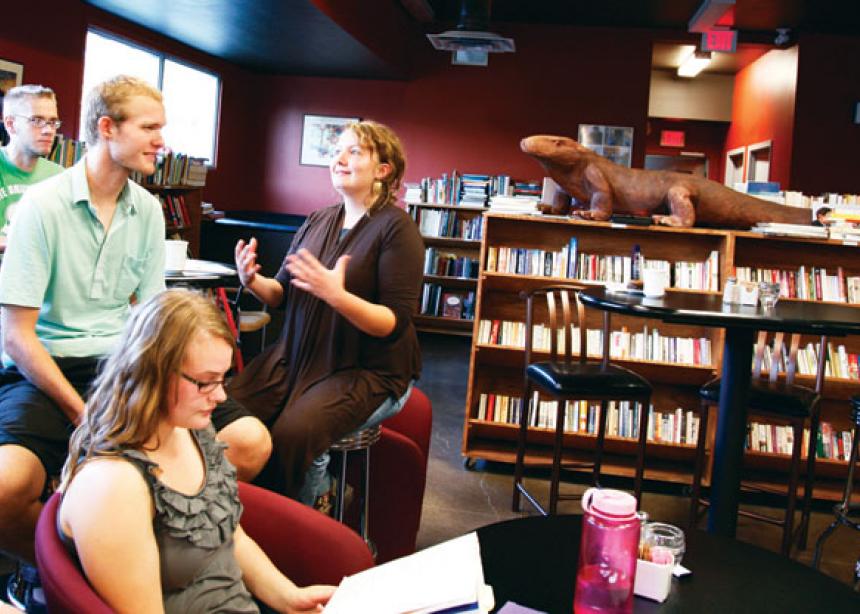 Sam’s Place, a used book store, café and performing arts venue, has developed into a welcoming meeting place for people living in Elmwood, a working class neighbourhood in the northeast part of Winnipeg.

But during its first 20 months of operations, the venture has not met the expectations that it could generate enough funds to cover operational costs and donate profits to Mennonite Central Committee (MCC) programs, says Brad Reimer, coordinator of MCC Manitoba’s resource generation team. “We didn’t do our homework,” he admits. “The projections for generating income were too optimistic.”

Sam’s Place opened in March 2009 under the same organizational structure as MCC thrift shops in Manitoba: as independent, community-based, non-profit organizations that contribute their proceeds to MCC. But beginning last September, Sam’s Place became part of MCC Manitoba and the community board running it became an advisory committee.

“It is our hope that Sam’s Place will generate enough funds to cover its costs and eventually have profits that will be donated to MCC, but it is not just about making money for MCC,” Reimer stresses. “Sam’s Place is developing into a hybrid social enterprise that blends community benefits and income generation.”

The building, appraised at $550,000, was purchased by MCC Manitoba from Sam’s Place for $350,000, the same amount as the loan that MCC Manitoba had co-signed previously. This loan enabled the commu-nity board operating Sam’s Place to purchase the building and renovate the main floor.

Under the new arrangement, Sam’s Place will cover 60 percent of the building’s operating costs, including mortgage payments.

In addition to co-signing the original loan, MCC Manitoba had loaned Sam’s Place $154,000 to help with renovation cost overruns and operating cost shortfalls. Sam’s Place has made payments of $10,000, leaving a balance of $144,000.

“That is the only debt from before Sept. 1, when Sam’s Place was a separate entity from MCC,” Reimer explains.

Renovations to the second floor for office space were expected to be complete by the end of January.

The MCC Manitoba board approved an additional mortgage of $200,000 for these renovations, but, according to Reimer, cost overruns of $60,000 have accrued.

Although revenue is improving, Sam’s Place still has operating shortfalls of between $1,200 and $1,500 each month.

To help Sam’s Place become self-sufficient, the advisory committee is exploring new ideas for income generation. A book and bake sale held in December raised $1,800, a rare book is currently being listed on the Internet for $1,500, and plans are underway to host special events that have admission fees and cover charges.

MCC Manitoba’s financial relationship to Sam’s Place has drawn criticism from some constituents over the past year, but, Reimer says, “Our advisory committee is committed to developing Sam’s Place into a financially viable enterprise with a strong community outreach component. I am energized and enthused by the commitment of our committee, volunteers and staff, and the potential for success and growth.”

About 90 volunteers of all ages assist Sam’s Place with a variety of duties, including working in the kitchen, sorting books and serving customers.