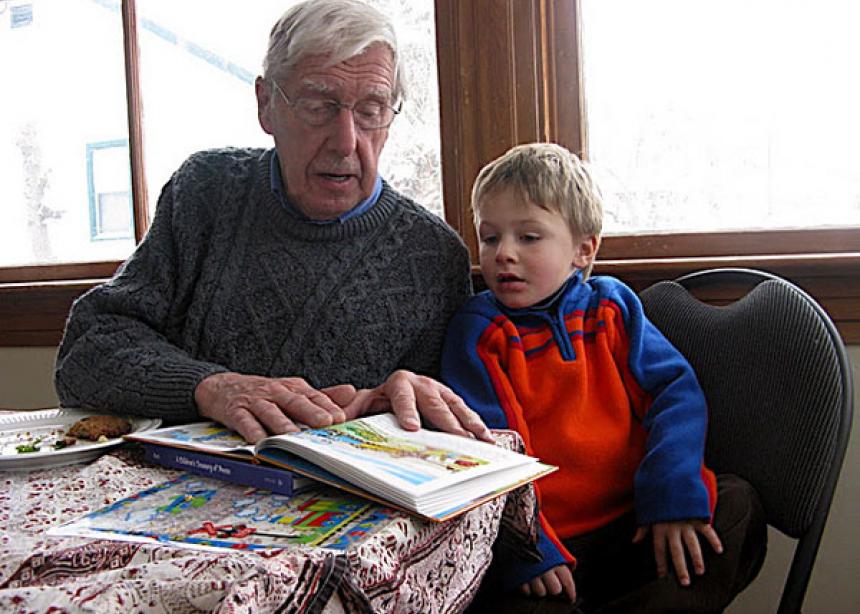 Fred Ritchie was a Canadian tank commander in Italy during World War 2. Tall at 6’3”, he answered the call of the Armed Forces feeling that he was responding patriotically to a cause that would wipe out evil. “There was pressure on us to enlist” he observed in a talk in Saskatchewan a few years ago. “We were made to feel guilty if we did not join up.” After the war Fred became active in the Canadian Legion to spread the slogan “never again.”

“That has all changed,” he says. “No more does anyone say never again; we old vets are now used as propaganda to advance a new kind of Canadian patriotism that promotes the military.” Fred belongs to a group called VANA (Veterans Against Nuclear Arms). When Fred attends a Remembrance Day Ceremony he wears a white beret to indicate his allegiance to the path of peace. “For this,” he says, “I have been criticized.”

Remembering his grandfather’s stories, Clark took courses at the Justice Institute of British Columbia. Searching for more places to pursue peace alternatives, he enrolled at Menno Simons College in Winnipeg and studied conflict resolution. While there he came across Mediation Services of Winnipeg and took a position there as an MCC volunteer, spending two years learning about and teaching conflict resolution strategies.

It was there that he crossed paths with another MCC volunteer, Sarah Buhler, who coordinated the Inner City program in downtown Winnipeg. Sarah had grown up in Thailand and was a recent graduate of Canadian Mennonite Bible College, now CMU. They met in a downtown church where Sarah asked Charlie what size shoes he was wearing. She was concerned for a homeless person who needed a pair of large shoes and judged Charlie’s feet to be about the same as her homeless friend. This strange introduction led to a further relationship.

Now Charlie and Sarah are passing the peace tradition to their children. Simon (6) and Benjamin (3), are surrounded by friends who play with toy guns. “Guns are bad,” says Simon who is a first grader. Little Ben is still finding his way explaining a crude Lego pistol that he made: “This isn’t a gun,” he said, “it’s a laser that shoots only good things.”

If Charlie came to his peace position with a fine role model, Sarah was influenced by the well-known story of her great-great-aunt “Taunte Liese” (Elizabeth Unger Buhler) who stood up to the terror of the dreaded Russian bandit, Makhnov. In 1919, in the midst of a raid on her family in the village of Grigorjewka, with the women huddled in one corner of the Grote Schtov (large living room), 20-year-old Liese glanced unwittingly at the Kommandant. For a second he noticed the glance. Then fearlessly she took her guitar and sang folk songs and hymns. The Kommandant was so moved that he ordered his posse out of the village.

Fred Ritchie also met his enemy. In a lull from the fighting, he dismounted from his tank and sought refuge in a depression. Unbeknownst to him, a German Nazi had chosen the same refuge. As Fred rounded an obstruction, he came face to face with his enemy. “For a frozen second,” he told Charlie, “our eyes met. Each of us knew that the other had a sidearm. And then as quickly as we had met, we walked past each other. I think of that young teenager from time to time and wonder what would have happened if we had done what we were trained to do. One of us would be dead.”

Soldiers and those they killed should all be remembered. And their families. And the names of conscientious objectors should also be remembered. As 94-year-old veteran Fred Ritchie says, “Never Again.”

Fred Ritchie lives in retirement in Penticton, B.C. Sarah is a professor of law at the University of Saskatchewan and Charlie is a City Councillor in Saskatoon. Sarah and Charlie have a third child, Rachel. They are active in Osler Mennonite Church. 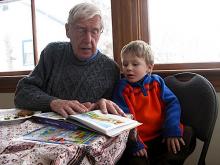