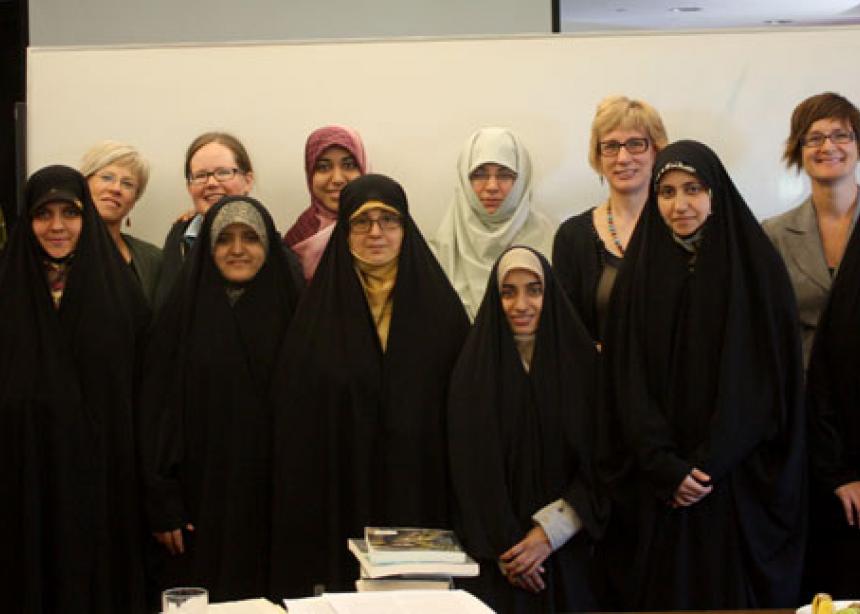 On a warm summer evening in Winnipeg there is lots of laughter, picture-taking, and food—it’s very much a typical “girls’ night out.” But this party is unique as more than half the women are Shia Muslims from Iran and they’re celebrating the end of an intense week of the study of Christianity. They’re also celebrating the friendships they’ve formed. For many of them, interfaith encounters are a first.

“Some things about Christianity you can learn from books,” says Mariyam Naqvi, “but when you learn from people practicing it, it’s completely different. Then you can understand with your whole soul and body.”

“Introduction to Christianity,” held June 11-17 at Canadian Mennonite University (CMU), grew out of an initiative by Iranian scholars in 2011, when a group of female Muslim students came to Winnipeg for a one-week course on Christian understandings of peace and justice taught by CMU professors Irma Fast Dueck and Sheila Klassen-Wiebe.

This spring, there was a request for CMU to offer a second course, for a second group of women graduate students from the Jamiat Al-Zahra, an international Islamic women’s institute Qom, this time for an introduction to Christianity.

It seemed a wonderful opportunity, a further link in a chain of Muslim-Mennonite interaction that goes back to 1990 when Mennonite Central Committee responded to the devastating earthquake in Iran. Educational exchanges followed that first contact, as well as a series of five scholarly dialogues between Mennonite theologians and Iranian Muslim clerics in Iran and at Conrad Grebel University College in Waterloo, Ont. and Canadian Mennonite University.

This year’s course examined the history, practices, and core theological beliefs at the heart of the Christian faith. Each day’s session began with Bible study, followed by lectures and discussion on topics such as Jesus, salvation, the trinity, Christian ethics, and the church. Fast Dueck and Klassen-Wiebe facilitated and taught parts of the course, with other CMU professors contributing in their areas of specialty. A number of Mennonite women sat in on the course as well.

The week included visits to a Hutterite colony, the Mennonite Central Committee offices and warehouse, and Sunday morning attendance at Charleswood Mennonite Church. And there was homework: a reading journal of at least ten entries, on articles in Confession of Faith in a Mennonite Perspective and selected Scriptures.

The nine visiting scholars, most in their twenties or early thirties, most quite fluent in English, participated keenly in everything. They jumped in with questions when things weren’t clear to them, sometimes breaking into the Farsi language to help each other understand the concepts being taught.

The women say they were surprised at “similarities” they encountered in Christianity. They found challenges too, such as the Trinity. “I just can’t understand it,” says Nafise Amiri.

“It has changed lots of my thinking about Christians—in a good way,” Zahra Golzar offers. “Before this, I thought that just we love God.”

Faculty involved in the course acknowledge that aspects of the interfaith dialogue have been controversial within parts of the Mennonite community, not least because of Western political tensions with Iran. They feel joyfully drawn, however, to continue to engage with Muslims, to articulate the Christian faith, and hopefully to also make a small difference on behalf of the struggling Christian church in Iran.