Music and the Environment—a locavore feast for ears and soul 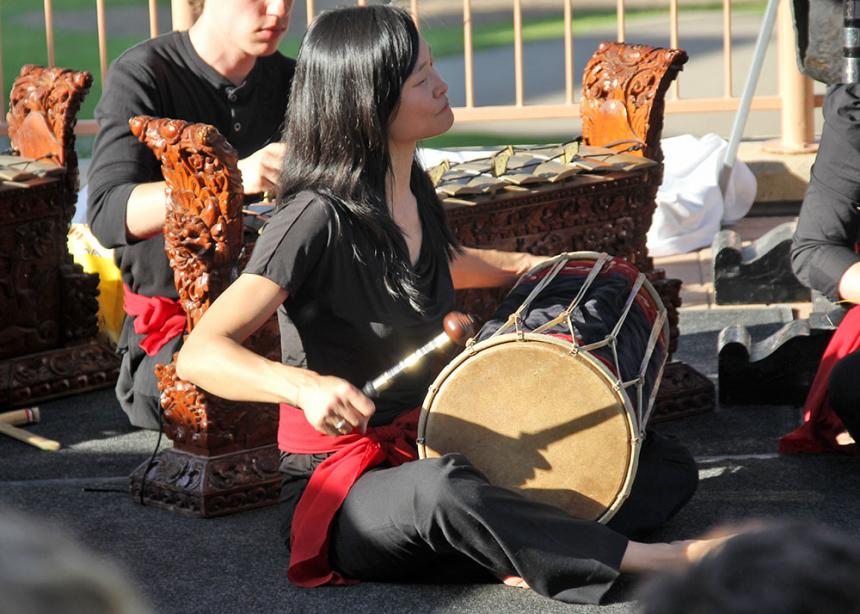 Sound in the Land. Sound of the Land. Sound for the Land. Sound with and behalf of and from the Land. Sound. Land. Take your pick, there was something of all these in the 2014 Sound in the Land festival/conference, June 5-8 at Conrad Grebel University College. Following the success of the 2004 and 2009 festival/conferences, Carol Ann Weaver, Associate Professor of Music, brought to fruition one more feast of music and thought as she retires in June this year after 29 years at CGUC. In 2004 the festival explored Mennonite ethnic musical culture; in 2009 it was expanded to include world music, especially Africa where Weaver spent several sabbaticals. This year the circle expanded to include the earth itself.

Key to the success of the festival/conference was the presence of R. Murray Schafer and his partner Eleanor James. In the 1960s Schafer pioneered a move to soundscapes, to make music in nature that took nature seriously, and included its sounds in the music. Several of his pieces were performed, and he gave the keynote address on Friday afternoon. There he noted that “creation is blind, but creation is ‘soundful.’” Humans see what is before them, but are immersed in sound from all around them, he said. “Sights are nouns, sounds are verbs” he and James noted. “God created by speaking, and then saw that it was good.”

These themes were echoed by many speakers through many means. Leanne Zacharias, cello professor at Brandon University’s School of Music, together with Douglas Friesen of Wilfred Laurier University and Ontario Institute for Studies in Education, led an outdoor workshop incorporating Schafer’s “ear cleaning exercises” and cello music. The participants were invited to listen in silence with their eyes closed for sounds near and far, loud and quiet, inviting and off-putting. Then they chose one of the sounds and made it, listening to the other sounds around them.

A series of speakers spoke about natural sounds. Virgil Martin, a planning information specialist for the Region of Waterloo, birder and local historian, described what might have been heard at the Brubacher House, now on the grounds of the University of Waterloo, in a series of journal entries beginning in 1814 and at 50-year intervals. Bird song was a key natural sound that was explored in music, presentations and on a dawn walk led by Lyle Friesen, a songbird biologist with the Canadian Wildlife Service.

Saturday night’s keynote speaker, Gus Mills, a large-carnivore researcher from South Africa, presented “Hearing Songs from the Earth—Carnivore Soundscapes and Images in the Kalahari Desert” in an evening that included African and African inspired music.

While it sometimes seemed that the Christian or Mennonite concern for the environment was assumed, the festival/conference had ample expressions of faith. Larry Nickel, a Vancouver composer, arranger and publisher spoke of God’s creation “through the Word” in John 1. Participants gathered at the Detweiler Meetinghouse on Sunday morning to sing “Hymns and Songs about the Earth” led by Marilyn Houser-Hamm, conductor, educator and musician, and Ann Schultz, conductor and principal of Rockway Mennonite Collegiate in Kitchener. A featured song was “Servants of the Soil” by Bryan Moyer Suderman, singer-songwriter at Smalltall music.

Joanna Moyer, a post-doctoral fellow at the University of Toronto’s School of the Environment, presented a paper on “The Consumption Sabbath: Considering a Faith-based initiative to inspire simplicity and environmental action” on Friday morning, and together with Bryan Moyer Suderman provided leadership for the Thursday Mennofolk concerts.

Dozens of other mini-concerts and presentations filled the four days. The general sense of participants—scholars and musicians—was that there is a Christian and Mennonite responsibility to care for creation. There were small nods to the work of farmers large and small in this calling.

See also Hearing the Music of the Open Road, for the experience of two participants who produced a soundscape of their travels to the conference. 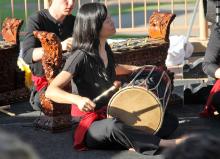 Leanne Zacharias plays cello as R. Murray Schafer, seated on ground, plays his shoes in rhythm at Zacharias’ and Douglas Friesen’s workshop at Sound in the Land on June 7. The participants were invited to join in, making natural sounds they heard, remembered or could make on the spot.