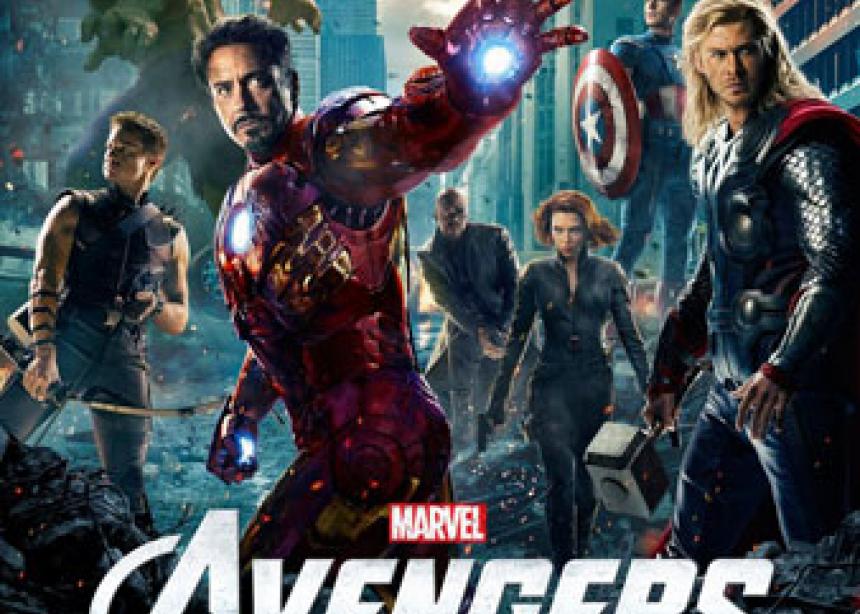 The six superheroes in question, all of whom were introduced in other films released over the past four years, represent different aspects of humanity and are worthy of a brief description:

It is the differences represented by this unlikely mix which makes The Avengers special. Ironically, the most sympathetic hero is the innocent selfless Captain America, who seems to represent the U.S. as it would like to see itself, or once saw itself.

Marvel’s The Avengers is a well-made film, with superior acting and cinematography, and a strong score. Joss Whedon is a master of characterization and sharp witty dialogue, so when our six superheroes are given a chance to talk to each other, the film is hugely entertaining. Unfortunately, much of the film revolves around the unimaginative plot, mindless action and overblown special effects, which I found incredibly boring. That violence is viewed as the only way to defeat the evil invaders and save the world—the myth of redemptive violence—goes without saying in a superhero film, but the violence is not taken seriously and few will notice this fact.

Why has Marvel’s The Avengers been so extraordinarily successful? Was it the brilliant marketing campaign or was it our apparently insatiable demand for superhero films? Batman and Spider-man will be returning to the big screen this summer and will almost certainly be blockbusters as well.

I grew up reading superhero comics, so I know something of the attraction of superheroes. I fantasized endlessly about being a superhero myself and saving the world—at least the damsels in distress—from all manner of villains. I’m sure that remains part of the attraction for young filmgoers today, but there must be more to it.

One explanation I have heard is that people are overwhelmed by their powerlessness in a world facing random acts of terrorism, and environmental and economic crises. Governments and mere human abilities do not seem capable of dealing with these evils, so we need to dream of superheroes to give us hope for finding a quick, and usually violent, solution to society’s problems.

I agree that superhero films give people hope at a time when fear and despair are prevalent, but I believe the above list of Avengers points to something more insightful; namely, that each of us, flawed humans though we may be, is called to be a hero and we all possess unique abilities that we can contribute to saving the world.

Smallville was a long-running recent TV show about superheroes, with a young Superman as the protagonist. Superman struggled incessantly with his destiny to be the saviour of humanity, to be the light which would show humanity the way. In one episode, Hawkman quotes Nietzsche when he tells Lois Lane that each of us is called to be a superman (uebermensch) by embracing what life has given us and making our life and the world around us better.

I am reminded of the musical Godspell, which has Jesus wearing a Superman shirt. Do we who follow Jesus not see Jesus as the Saviour of humanity, as the light to show us the way? Is it possible that the increasing popularity of superheroes is related to living in a secular society that has largely forgotten Jesus? Without Jesus as our role model, do we need to be regularly exposed to other super-human role models who are willing to sacrifice their lives to save humanity, role models who will inspire us to be better and make the world better?

If so, we need to remember that there is a profound difference between Jesus and superheroes: Jesus renounced the use of violence, superpowers and the quick fix as means of saving humanity. In a society hungry for superheroes and salvation, our task may be to remind people that the word “super” may be a stumbling block and that there is a Saviour who can inspire us to be real-life, nonviolent, compassionate heroes working at filling the world with God’s shalom.