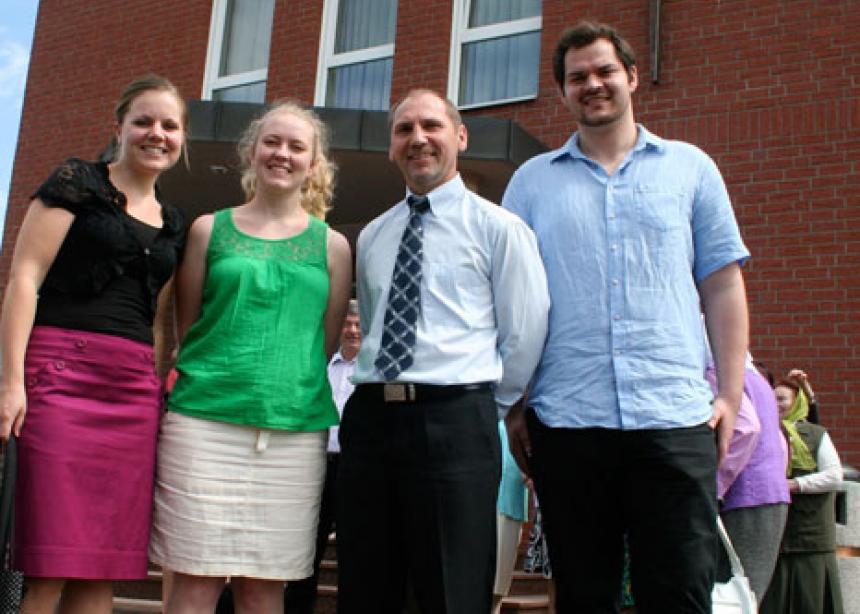 Her great-grandfather was once taken prisoner, and her grandmother was sent at a young age to labour in Kazakhstan, separated for weeks from her mother and sisters. The KGB, the Soviet secret police, kept a watchful eye and applied pressure when it perceived that religious efforts were going too far.

But the 24-year-old member of Christuskirche Niedernberg (Niedernberg Christ Church) wonders about a paradox of freedom. “Sometimes I get the feeling they were more grateful than we are in our luxury,” she says.

Her family and the Niedernberg congregation are Aussiedler (resettlers), Russian Mennonites who emigrated from the former Soviet Union to what was then West Germany in the 1970s and ’80s.

Aussiedler are more conservative than other German Mennonites. For women, this sometimes translates into an objection to cosmetics, jewelry and fashionable dresses. Lay preaching is preferred, and churches avoid the salaried-pastor system employed by the nearby Union of German Mennonite Congregations. Some, like the Niedernberg congregation, do not use the word “Mennonite,” preferring to describe themselves as evangelical or Baptist.

The Niedernberg congregation got its start in 1989 when about a dozen people began meeting. They had recently arrived from Kazakhstan. They were soon joined by others from the former Soviet Union, including present-day Uzbekistan, Ukraine, Moldova and Siberia.

From children’s activities on Friday night—some in Russian—to small groups and Bible studies, there are gatherings every day of the week.

The Sunday morning service begins with praise songs in High German, followed by prayer and a message that some might mistake for an early sermon. The service concludes with a sermon by one of about 12 volunteer male preachers.

Tucked above the balcony, a media centre includes an imposing sound-mixing board, racks of amplifiers and wireless receivers, and computer equipment for projecting song lyrics and Scripture passages on a wall at the front of the sanctuary.

A tradition of evangelism has been passed through the generations. Alexander Spenst, one of the church’s three elders and Jenny’s father-in-law, recalls thinking that Germany was a Christian nation upon his arrival.

“In the Soviet Union, there were believers and unbelievers,” he says. “In Germany, there are many non-believers who are called Christian, but they are just like the atheists over there. Today, I see similarities to the U.S.S.R.”

Jenny laments the prevailing secular culture. “I’m overwhelmed by tolerance,” she says. “I sometimes wish people would focus less on tolerance and more on decisiveness. Our country is outwardly characterized as Christian, but is terribly wicked.”

Alexander says that intensive Bible study, something the church supports through a school in Bonn, has a complicated history due to previous regimes. “In the U.S.S.R., Christians seldom had teacher training,” he explains, noting that education can make someone stand out from the rest of the church and lead to congregational disunity.

Johann Siemens, 23, says that education is increasing, however. “More people are attending Bible schools,” he says. “This changes the general level of knowledge in the congregation, which can bring with it more scrutiny.”

But generational differences are not pushing young adults out of the church. Tatjana Hagelgans, 23, says that training, study and work might pull people away for a time, but most return with experiences that can impact the congregation.

Ties both within the church and to Russia are strong and fertile, like the Bavarian soil on which the church building sits, much closer than the identity they might share with North American Mennonites whose ancestors came from Russia.

“Because the churches in North America have already been there a long time, I think there is less evidence of the Russian Mennonites,” Hagelgans says. “I know a girl from Vancouver, also with a Russian Mennonite background. She told me that young people always hold a Halloween party. That would be unthinkable for us. I think the churches in North America have adopted more traditions of the surrounding area, but we, still, are not ready.”

Tim Huber is associate editor of Mennonite World Review. He wrote this article for Meetinghouse, an association of Mennonite and Brethren in Christ publications. 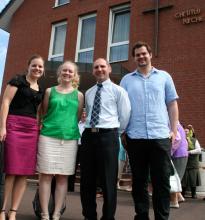