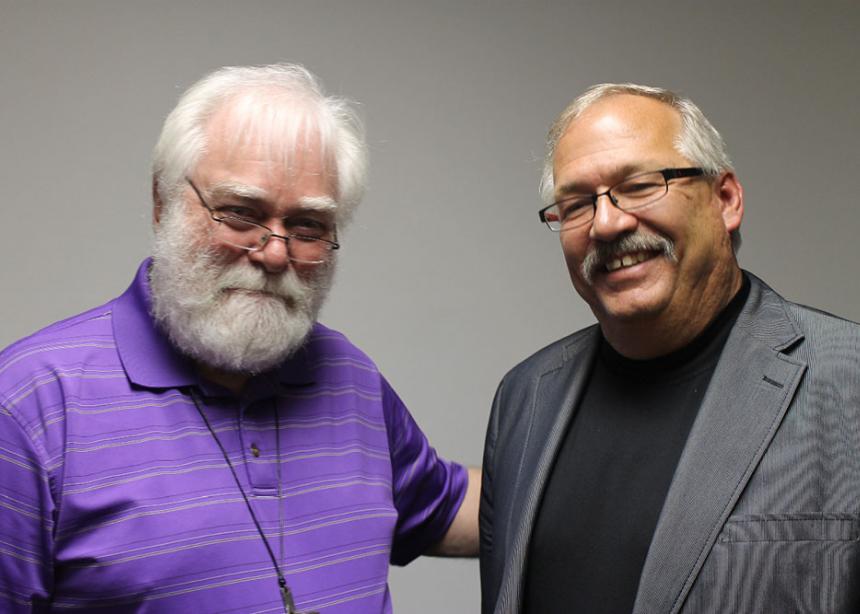 Erwin Warkentin, a member of the Harmony Group and Willard Metzger, executive director of MC Canada.

Members of the Harmony Group, formed six years ago by Mennonites seeking inclusion of LGBTQ (lesbian, gay, bisexual, transgender, queer) in Mennonite Church Canada, recently engaged in earnest dialogue with Willard Metzger, executive director of Mennonite Church Canada. Metzger invited the Group’s responses to the next steps of the Being the Faithful Church (BFC) discernment process at a meeting held at Bethel Mennonite Church on June 19. Several members of the General Board, MC Canada and MC Manitoba joined the circle of approximately 50 participants.

At the Assembly in Winnipeg (July 3-6. 2014), the General Board will be asking the delegate body if they have perceived correctly what questions need to be addressed next in the discernment process. The BFC 5.1 document they will present outlines the questions as follows:

1. God’s gift of unity in Christ is not invalidated by our disagreement. How shall our unity in Christ be maintained while understanding matters of same-sex relationships differently?

2. Most responses indicate a desire to be more compassionate and welcoming of those individuals who are same-sex attracted. How do congregations hope to reflect this desire?

3. In reviewing the trends what counsel do delegates have for the area and national church in light of the different understandings of compassionate responses towards persons that are in same-sex relationships?

Metzger said, “Our people are all over the place in how they understand the topic but the task force has determined that even in the midst of this there are some trends we recognize. Certainly there is a strong sense that there isn’t any appetite to revisit the Confession of Faith but at the same time churches want to become more compassionate. We also heard that we don’t want this to divide us. We want to remain together as a people.”

Several wondered about the direction the process was moving. “It seems to suggest that the discernment process is not going to work and therefore we are going to focus more on how we will maintain unity within MC Canada. It seems to suggest at some point, maybe 2016, the assembly will be asked to allow every congregation to discern for itself how it wants to respond to LGBTQ inclusion.”

“We need leadership from the top. I would like to see some of the leaders commit themselves and say we are going to do what is right even if it goes contrary to some of the congregations.”

“Were people in the LGBTQ community consulted or contacted in making this BFC 5.1 paper? I get very concerned about one group of people making decisions that effect the lives of other people so deeply.”

Metzger responded that although he has talked with LGBTQ groups and individuals at different times, this community was not included. Metzger was urged to follow through on some of the commitments that were made two years ago, namely to draw into the conversation other social sciences and to be intentional in seeking out marginal voices.

Erwin Warkentin, who chaired the evening meeting, recalled, “The first BFC paper talked about three possibilities in terms of the end of the discernment process: the church can either repeat what it said earlier, it can change what it said earlier, or it can say something new. Is the national church ready to speak or no? If so, how long will it be before the national church will be able to speak and where is the leadership coming from?”

Metzger asked whether an option might be to allow the Confession of Faith, which states that “God intends marriage to be a covenant between one man and one woman for life,” to continue to stand, while at the same time acknowledging that there are things we disagree on. “This is us having this conversation, congregations led by the same Spirit, the same God, coming to different understandings. We’ve never embraced that kind of option.”

But participants indicated that as long as the Confession of Faith and the Saskatoon resolution of 1986 remain in effect, members of the LGBTQ community who seek to live out their faith in the MC Canada community will continue to suffer pain and disenfranchisement. “Almost thirty years have passed since that resolution came into being and what has it done? When a person in our church came out as gay it gave us license to stamp ‘gay’ across their forehead and plaster ‘abomination, unwholesome, etc’ on their back and then when they were leaving our church doors we call after them ‘but we love you.’” That memory shared by a father whose son came out as gay 34 years ago resonated with others in the group. “Let’s wipe this resolution off our books and then we can go on from there,” he urged.

The group wanted the General Board to know that, “while the discernment process slowly works or maybe doesn’t work, there are people suffering, afraid to speak out, and even some who see no alternative but to take their own lives.”

Erwin Warkentin, a member of the Harmony Group and Willard Metzger, executive director of MC Canada.