Mennonites learn about hospitality and living for others 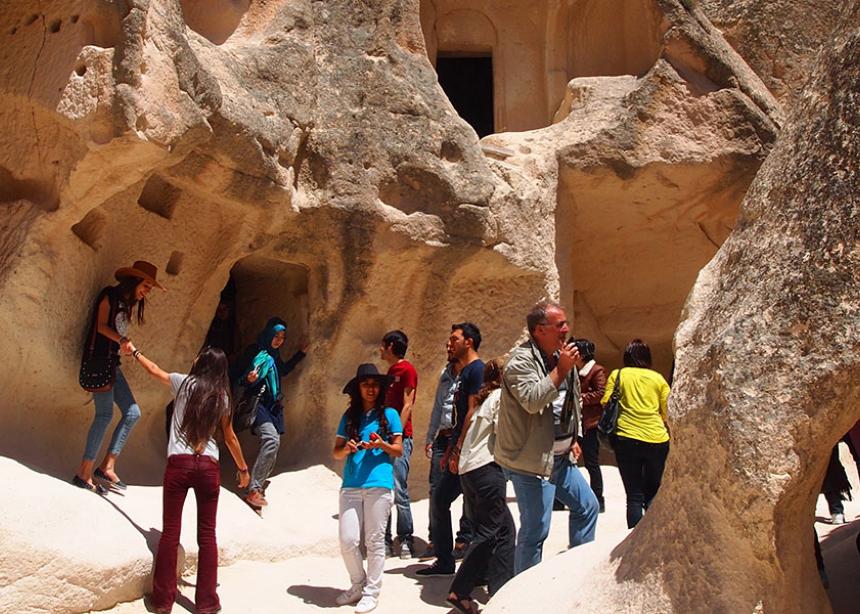 The Goreme open air museum near Cappadocia, Turkey, includes rock-cut chapels that are part of an ancient Byzantine monastic settlement. A group of Ontario Mennonites visited the site in May as part of an intercultural learning tour.

On May 5, a group of eleven Mennonites from Kitchener-Waterloo area churches embarked on a ten day intercultural study tour of Turkey, sponsored by the Intercultural Dialogue Institute (IDI). The tour was co-led by Leon Kehl of Floradale Mennonite Church and Sezai Yeter, a member of the Turkish community in Kitchener.

IDI is run entirely by volunteers from Hizmet, a reform movement within Islam that began in Turkey during the 1960s under the leadership and inspiration of Fethulah Gülen, a Turkish preacher, writer and activist. Hizmet, “The Service,” works to actively build mutual understanding through education and intercultural dialogue, believing that peace begins with knowing one another. The purpose of these study tours is to build bridges of understanding that lead to peace. As one Turkish academic and mystic we met noted, “Every existence is inter-related.  If this is true, how can we be in conflict with each other? To be in conflict with another is to be in conflict with ourselves.”

The organization also has a relief and development arm, which is similar to Mennonite Central Committee. Kimse Yokmu (translated “Is there anyone to help?”) works in 110 countries, in the areas of disaster relief, humanitarian aid, medical assistance and educational resources, and boasts over 50,000 volunteers. As testimony to the high regard in which this organization is held, the United Nations High Commissioner for Refugees chose Kimse Yokmu to work with Syrian refugees in Turkey near the Syrian border, where for the past two years they have been providing meals to over 4,000 people a day.

Our trip itself included a mixture of sightseeing and impromptu gatherings at open air cafes, and more serious and informative meetings with journalists, academics and business leaders. Turkey is an experience for the senses, from the ancient city of Istanbul, bursting at the seams with its population of over 14 million, to the stunning mountain vistas of central Turkey, and the lush Mediterranean coast. Istanbul’s geographic location at the juncture of the Asian and European continents is reflected in the faces of the people who fill its vibrant and bustling streets and in the ever-present sense of history that pervades the city.

In Central Turkey, we visited the poet Rumi’s (1207-1273) tomb, and watched the Whirling Dervishes, members of the mystical Sufi sect of Islam, perform. Near Cappadocia we toured underground cave cities where Christians hid from Roman persecution during the second century, and the Goreme open air museum, a Byzantine monastic settlement, that includes rock-cut chapels, monasteries and churches filled with mosaics dating to the late Byzantine period.

As amazing as all of this was, what stood out most from our experience was the warmth and openness of the people we met, beginning with Sezai, our guide, who spent countless hours arranging transportation, meetings, lodging, meals and tours for our group, and also acted as translator during our visits with Turkish host families and sponsors. This he did with grace and kindness. We saw this kind of selfless service in other members of Hizmet that we encountered during our trip as well.

When we asked some of our Hizmet hosts how they came to be involved in the movement, we heard stories of transformation that grew out of the faith and service they saw lived out by those they met in Hizmet movement, or from reading Gülen’s writings. Some of these stories emerged during meals shared with our three Turkish host families, each of whom impacted us deeply with their hospitality and generosity. For example, one of our hosts, Huseyin, told us that earlier in his life, he had been struggling. The experience of visiting Konya, the burial place of the poet Rumi, and reading his words and teachings, moved him deeply. This, in turn, led him to Gülen’s writings and the Hizmet movement, which transformed his life.

Others we met recounted their encounters with Hizmet as students. Hizmet provides scholarships to students to cover the costs of tuition and board while attending high schools or universities in larger centres. Many live in intentional communities (Lighthouses) headed by an older student. It is this experience of faith modelled and lived out that has led many of these students to continue to make a similar commitment to a life of voluntary service.

I think I speak for our entire group when I say that it was hearing these accounts of personal transformation from our Muslim hosts and friends in Turkey and witnessing their commitment to their faith that was the highlight of our trip. We found ourselves challenged to reflect on the level of our own commitment to service and to putting others first. This is our highest calling as human beings, and every religious tradition affirms this, including Islam.

The Goreme open air museum near Cappadocia, Turkey, includes rock-cut chapels that are part of an ancient Byzantine monastic settlement. A group of Ontario Mennonites visited the site in May as part of an intercultural learning tour. 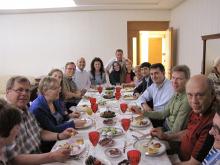 The group who visited Turkey in May appreciated the warmth and hospitality of their host family, the Dogans. (From left): Mandy Witmer, Phil Witmer, Pat Manske, Josie Winterfeld, Leon Kehl, their host’s brother and his wife, the Dogan family with their daughter, the grandfather, a friend, guide Sezai Yeter, Steve Manske, Ross Weber and Carol Weber. Also included in the tour were: Fred Martin, Wanda Wagler-Martin, and Will Winterfeld.