Although volunteers, finances and material resources came predominantly from Canada and the United States, the immensity of this disaster brought people of faith from all over the globe together, giving $14 million through MCC to support the people of Haiti in their recovery 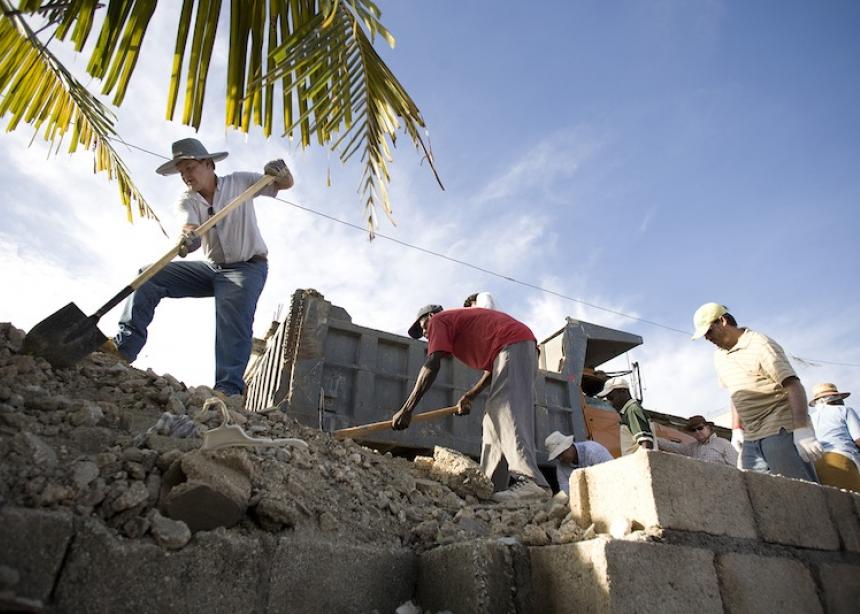 From Paraguay, Nicaragua and Costa Rica, people volunteered through Mennonite Central Committee (MCC) to work side by side with Haitians

, cleaning up rubble left by the devastating earthquake that hit the island nation one year ago, Jan. 12, 2010.

In addition, people in 39 countries, including Canada and the United States, gave MCC money for Haiti, such as gifts from the Brethren in Christ church in economically troubled Zimbabwe and a Muslim partner organization in Bosnia and Herzegovina.

Although volunteers, finances and material resources came predominantly from Canada and the United States, the immensity of this disaster brought people of faith from all over the globe together, giving $14 million through MCC to support the people of Haiti in their recovery.

“That’s the vision for the future that we are trying to get to – multiple different countries all helping, sending resources in multiple directions to help people in need in multiple countries,” said Arli Klassen, executive director of MCC.

In the Haiti disaster, even churches in places of significant need, such as the Democratic Republic of the Congo and Zimbabwe, are able to help, Klassen said.

Mennonites in the Dominican Republic, which shares the island of Hispaniola with Haiti, were among the first to offer assistance, helping to direct material resources and house volunteers on their way to Haiti. Since the port in Port-au-Prince was closed in the initial months, most supplies were directed through Santo Domingo.

“As soon as the Mennonite community in the Dominican Republic heard about this emergency, they were ready to help,” said Aura “Pancha” Moreno, MCC Haiti’s Connecting People’s facilitator during that time. Moreno now lives in Staunton, Va.

“They brought rice, cornmeal, buckets, water, tarps, bleach, beans and oil – that was awesome,” said Moreno. The supplies were given to the Croix-des-Bouquet congregation of Assemblée de la Grace, a conference of Mennonite churches.

Dr. Miqueas Ramirez, an eye doctor who is one of three pastors of Iglesia Evangelica Menonita Luz y Vida, accompanied the truckload of supplies delivered about a week after the earthquake. “We have wanted that they feel our love, that we are part of God’s nation, without looking at where we come from or what race we belong to,” said Ramirez.

He and Pastor Lesly Bertrand, overseer of Assemblée de la Grace, valued the connection as a starting point in cooperation between Mennonite churches in Haiti and the Dominican Republic – two countries that have a history of racial, political and cultural separation.

MCC Haiti alumni from Canada and the U.S. who are fluent in Creole took turns going to Haiti during the first three months to assist MCC workers and to explore health care needs. While 15 volunteer structural engineers evaluated buildings in Haiti for soundness, others in Canada and the U.S. offered assistance by giving material resources including 34,072 relief kits and 26,712 comforters, writing checks or planning fund raisers.

In July, nine Paraguayan Mennonites offered their muscles and sweat to help with rubble removal. The Work and Learn team left with a new understanding of the challenges facing their brothers and sisters in Haiti. They worked for six long days, side by side with nine Haitians, just to clear one property by hand.

“I have learned through these people who have lost almost everything that they did not lose hope that God would send help…. I learned that we must have more trust in God and also be more grateful for what we have,” said Johny Schroeder, a member of the Paraguayan team.

Personal connections between Work and Learn team members of Paraguay, Guatemala and Costa Rica helped to break down stereotypes and misperceptions, said Moreno.

“Haiti is more than a dot in the Caribbean now; it’s a country,” Moreno said of the team members. After volunteering, they can say, “I have a friend there now.”

One team from Canada worked on a reforestation project in August, and in October, a team from the U.S. built a ramp to make it more feasible for people living with disabilities to attend. Like the teams before them, they shared their new understandings about Haiti with people at home.

Other people from around the world gave money to support MCC’s work in Haiti. Bishop Danisa Ndlovu, who oversees the Brethren in Christ church in Zimbabwe, asked that an offering, collected at his consecration service for another term as bishop, be given to Haiti. The church gave $2,300.

“I think it was easy for people to understand,” said Ndlovu, who also is president of Mennonite World Conference. “When disaster hits other places, it’s not a question of how much, it’s a matter of the heart.”

In Bosnia and Herzegovina, an MCC partner and Muslim charity organization, Merhamet, decided to gather money for Haiti. Merhamet gave $28,000, collected from communities that had received help from the organization and from MCC.

“Disasters can bring out the best in people as they try to show God’s love for those who have experienced tragedy through no fault of their own,” said Daryl Yoder-Bontrager, MCC area director for Latin America and the Caribbean.

“When people get close to those who lived through disaster, however, they quickly learn that true giving is a two-way street and that they get as much as they give,” he said. “When everyone realizes that both the ‘receiver’ as well as the ‘giver’ have much to offer each other, then the most exciting, meaningful connections can be made across countries and cultures that build up everyone’s dignity as God’s children.”