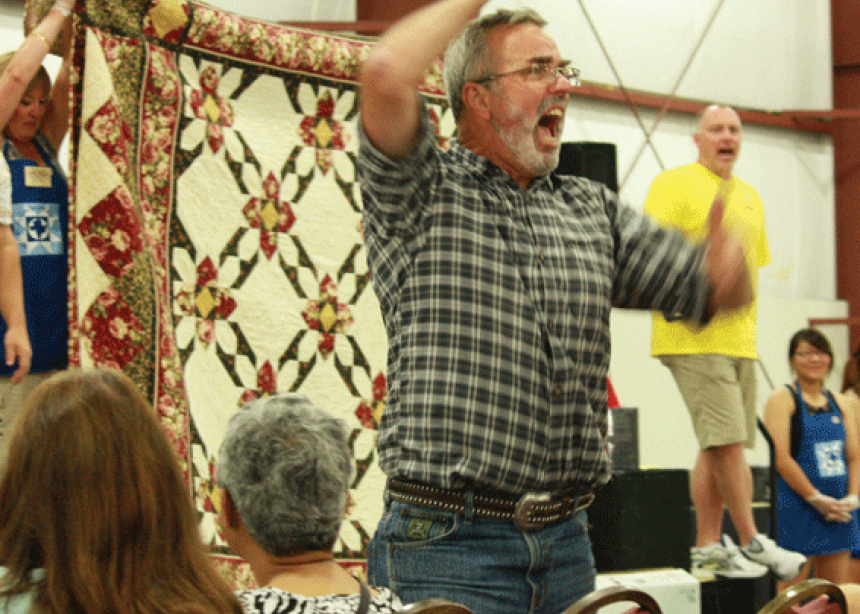 Clyde Dougans is pictured in action on the auction floor at last year’s MCC Festival for World Relief, Abbotsford, B.C. The popular auctioneer passed away on March 7.

Mennonite Central Committee (MCC) staff and volunteers are mourning the loss of their friend and long-term volunteer, Clyde Dougans. Dougans was a fixture at the annual MCC Festival for World Relief in Abbotsford, where he entertained crowds as an auctioneer, helping MCC to raise hundreds of thousands of dollars over the span of his career.

“Clyde was the life and the energy that has driven the MCC auction for many years,” said Dora Hoeppner, MCC B.C. relief sale coordinator. “He will be sorely missed.”

Tim Kroeker, who volunteers in the auction area and worked with Dougans for years, reflected on the gifts Dougans brought to the auction and the other volunteers. “Clyde was a great guy and had a huge impact on the MCC sale for over 35 years,” Kroeker said. “I always enjoyed seeing his big smile and hearing his laugh. His energy was contagious. He will be sadly missed in September and the Septembers to come.”

Dougans would share the stage with other auctioneers, but was far more entertaining when he was on the floor watching as bidding numbers were being raised. It was often said that he might come between people and their wallets during the auction. He was known to ask the auctioneer to pause for a moment while he had a “chat” with a person who was hesitant to go up one more bid. Occasionally he’d even pull a bill out of his own wallet and offer it as incentive to get that person to the next level. Once that person was won over, he’d do the same thing to the rival bidder.

But Dougans knew that is was not just about entertainment or about acquiring more things. He took the time to understand the organization for which he was raising funds.

“Clyde always encouraged folks at the auction to remember that their bidding on auction items would be helping people around the world have enough food, water and basic necessities of life,” recalled Phil Schafran, MCC B.C. director of resource development and communications. “He would say, ‘It’s only money, folks, and you are helping MCC help others.’ ”

Dougans is survived by his wife Joy, three children and five “and a half” grandchildren (one grandchild is on the way.) 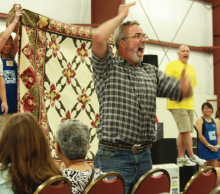 Clyde Dougans is pictured in action on the auction floor at last year’s MCC Festival for World Relief, Abbotsford, B.C. The popular auctioneer passed away on March 7.