In Canada, for every dollar Canadians contribute to MCC and other registered Canadian charities responding to the East Africa drought, from July 6 until Sept. 16, the Government of Canada also will set aside one dollar for a fund designated for East Africa drought. 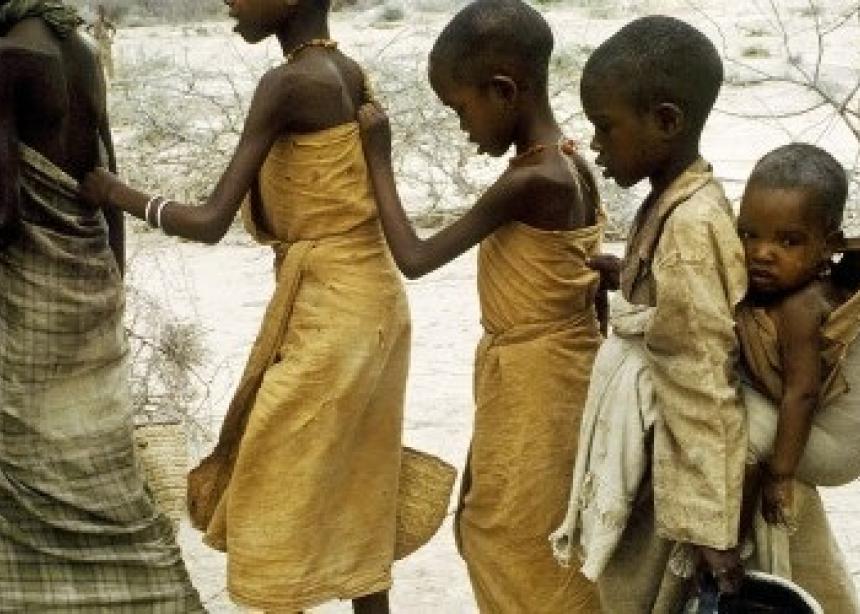 An immediate and extended response to the current drought and food crisis in East Africa is essential for limiting the vulnerability of millions looking for enough food to survive, said Bruce Campbell-Janz, director of Mennonite Central Committee’s (MCC) Africa Department.

“People have begun to sell assets to buy food and to leave their homes behind to look for work or food,” said Campbell-Janz. “That’s a critical issue because over time if you sell your productive assets to buy food you become more and more vulnerable. So the next time there’s a shock, you’re less able to cope and less able to meet your food needs and other needs you may have.”

Recognizing this crisis, MCC is appealing for $1 million to support its response, already begun in Kenya and Ethiopia. MCC also is exploring ways it can help meet the needs of Somali refugees, who are flooding refugee camps in Kenya. Some refugees have left areas of famine in Somalia.   “There’s a real desire to respond in a timely fashion, to try to limit people having to sell their productive assets,” Campbell-Janz said.

The response also needs to be long enough that people can regain a sense of stability, he said.   Two consecutive, poor rainy seasons have caused drought in large sections of East Africa. In addition to crop failure and many livestock deaths, the situation is exacerbated by high, local cereal prices and areas of conflict.  “Even if the rains are pretty good in the next agricultural season, that’s not going to get people back to where they were before,” said Campbell-Janz. “We’re looking at a response in this case that will last up to 6 months. This needs to be a longer-term commitment.”

Already two food-for-work programs in Kenya are underway. Working with two partners, the Sahelian Solutions Foundation and the Utooni Development Organization, workers are being paid with cooking oil, maize and beans to build 92 sand dams that were already scheduled for construction before the current food crisis.

When rains do come again in the future, sand dams will store rain and storm water underground so that it can be used for irrigation during the dry season. The food-for-work program meets immediate needs, even as workers are creating water retention systems that should help them in the future.  “We continue to work with our food security partners towards sustainable food security solutions and self-sufficiency,” wrote Martha and Ron Ratzlaff, MCC representatives in Kenya. “However, in this situation the drought has caused a desperate food situation and food aid intervention is urgently needed in many affected parts of the country.”

The Ratzlaffs are from Calgary, Alta.  In Boricha, Ethiopia, where MCC works with the Relief and Development Association (RDA) of the Meserete Kristos Church, one-third of the 74,758 residents are in need of food assistance, according to MCC Ethiopia representative Dan Leonard, of Winnipeg, Man. Government leaders in the area estimate that 6,675 people face malnutrition, compared to 1,595 people last year.

MCC has already committed an initial $200,000, with the expectation of providing more funding for food assistance in this area. Meserete Kristos Church is a member of Mennonite World Conference.  Boricha doesn’t look like its people should be hungry, said Leonard after a mid-July visit there. Fields are green because they are getting some rain now.

However, the spring rains that support the primary maize crop failed. Not only does this failure impact the availability of food, it affects food prices, health, livestock and can create conflict between farmers and pastoralists, he said.  “What we are seeing in Boricha lacks the appeal and drama of Somalia,” said Leonard, who serves with his spouse Karin Kliewer, also of Winnipeg. “But … this region is facing real need with a limited aid response.   “People may or may not die directly from hunger, but they are not healthy and are more susceptible to disease.

This is particularly true for already vulnerable populations, such as those living with HIV and those who are very poor.”  Giving can be done online, www.mcc.org, or at any MCC office. Donations to MCC should be earmarked for “East Africa Drought Response.”