“The children love to hear me read stories to them,” says Sara Neufeld 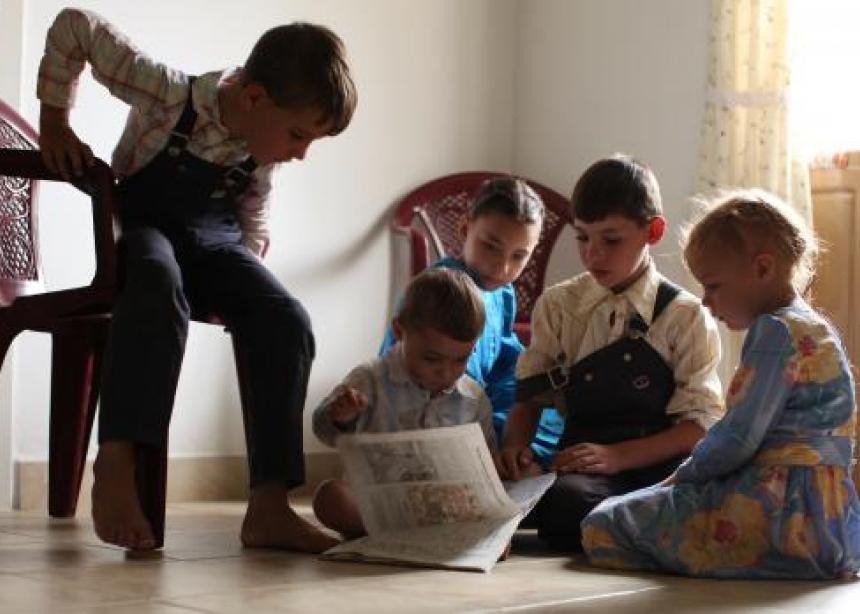 Eleven-year old Franz Neufeld tries to hold back his tears as he talks about a Bible story that his mother reads to him and his siblings.

It is the story of Joseph, who is favoured by his father, sold into slavery in Egypt by his jealous brothers and reunited with his father, brothers and their families when the brothers came to Egypt to buy grain.

“Joseph must have been very lonely,” said Franz, the eldest of seven children living with their parents Sara and Heinrich Neufeld in this Mennonite colony 50 kilometres south of Santa Cruz.

The best part of the story, he said, is the happy ending with the family being united.

“The children love to hear me read stories to them,” said his mother Sara Neufeld. “It is so interesting for the children. They often cry when I read. They often say, ‘I want to hear it again.’

“Reading is something that interests me,” said Neufeld, explaining her parents had encouraged her to read and she is now passing on this legacy to her children.

She remembers going with her father to MCC’s resource centre in Santa Cruz,called Centro Menno,  to pick up Das Blatt and borrow library books. These trips to Centro Menno are now highlights for her children.

Neufeld likes having the magazine in her home because it connects Bible stories to lesson ideas, colouring pages, activity sheets, quizzes, crossword puzzles and provides hours of fun and learning opportunities for her family.

Das Blatthas grown to almost 12,000 copies with 2,100 distributed in Bolivia. The magazine is distributed mainly through schools. It is designed to supplement teachers’ resources in Old Colony schools where study materials consist mainly of a German Bible written in Gothic script, Gesangbuch (hymnal) the Fibel (primer or first reader) and Catechism (basic church doctrines). More than 7,000 copies are distributed in Mexico.

In the Swift Current Colony it is not distributed through the school but Neufeld said teachers encourage parents to read it in homes.

“The teachers say that we should read to our children every day—I don’t do it every day, but I do it a lot,” she said.

She often reads to the children from the Plautdietsch Bible—a Low German Bible published in 2003. Neufeld said her children like to hear her read this Bible because it is written in the language they speak in the home.

Die Mennonitische Post, a 28-page biweekly newspaper published by MCC Canada, is written mainly in German but some of the columns are written in Low German.

“I’m very curious about what is happening in Mexico and in Canada and the rest of the world—if it wasn’t for Die Mennonitische Post, where would I get this information?” asked Neufeld. “I look forward to getting Die Post. For me, it would be a great loss if I couldn’t read this newspaper.”

The Swift Current Colony in Bolivia was started in 1968 by families from Swift Colony in Mexico. The colony has grown to 20 villages.

The colonists are descendants of pioneers who immigrated to Manitoba from Southern Russia (Ukraine) in the 1870s and became members of the Old Colony Mennonite Church, officially known as the Reinlaender Mennoniten Gemeinde.

In the 1920s, church leaders and their congregations in Manitoba and Saskatchewan moved to Mexico in an effort to replicate and maintain school systems, civic structures and traditions adopted by founding members of the church.