A life devoted to God 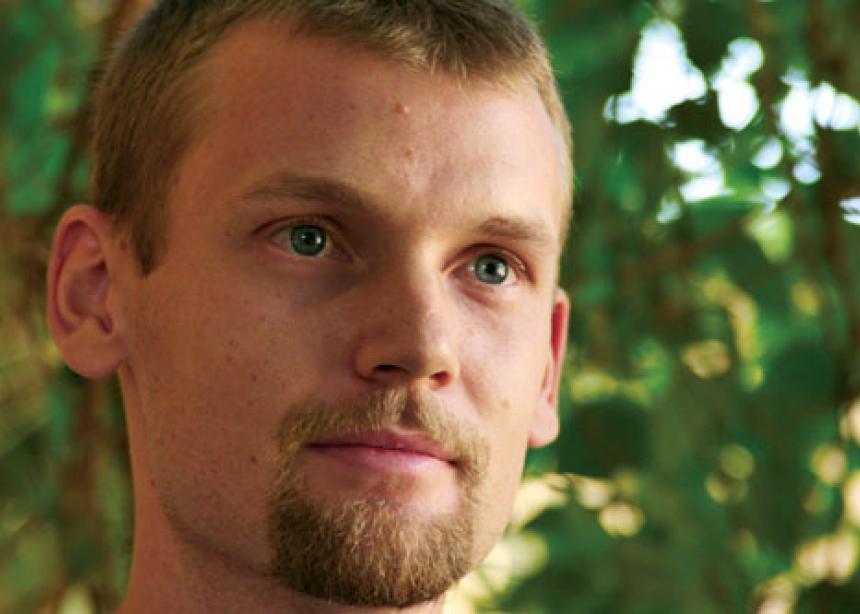 Former Mennonite Church Canada Witness worker Jeff Warkentin passed away at the age of 32 following a brief struggle with meningitis.

Jeff Warkentin’s passion for God shaped a life defined by service and relationships. As son, brother, husband, father, teacher, pastor, mission worker, musician and friend, he reflected God’s grace and love to everyone he encountered.

Warkentin’s skill in working with small groups played a key role in the ministry he shared with his wife Tany in Burkina Faso, where they served with Mennonite Church Canada Witness for six years. During that time the couple helped shape and nurture a congregation of university students in the capital city of Ouagadougou.

After a sudden and brief struggle with meningitis contracted after returning to Canada, Warkentin passed away on Sept, 24. He was 32.

At the funeral service held in Pincher Creek, Alta., on Sept 30, brother-in-law Topher Willms read from a reflection written by Warkentin’s parents: “We cannot understand why Jeff should leave us so soon when we thought there were so many contributions left for him to make.

. . . But we also know that many rich experiences were packed into the 32 years which God gave Jeff here on earth. We praise God for the joys and blessings that were ours to share with him during this short time.”

Tany expressed a similar sentiment: “I find blessing in the fact that we met each other so early, that God called us quite clearly at a very early age, and that we were able to serve God so early. It strengthened our sense of identity as disciples, and our self-identity. . . . Even though he was young, it feels as though he lived fully.”

During Warkentin’s formative years, the family practice of daily devotions was sometimes forgotten in the hustle and bustle of life, but he always remembered. During the visit of a non-Christian school friend, his parents purposely overlooked the practice to avoid being presumptuous. But their son felt the Word of God was meant to be shared. “Aren’t we devoting tonight?” he asked.

Warkentin attracted a wide circle of school friends and proved to be a natural peacemaker. “His wry sense of humour and his knack for making people laugh with a short quip delivered at just the right moment, could diffuse a potentially tense situation in a moment,” Willms read.

In the following years, the Alberta-based family grew to include daughter Danika and son Asher. In 2005, a call from MC Canada drew them back to Winnipeg to prepare for ministry in Ouagadougou. They arrived in Burkina in February 2006. Son Kenani was born in 2008.

When the Warkentins announced that their ministry in Burkina Faso would draw to a close in 2011, Siaka Traoré, pastor and president of the Burkina Faso Mennonite Church, wrote a letter of commendation describing their sensitivity towards others, their inclusiveness and hospitality. He also noted Warkentin’s skill as a teacher: “Jeff, thank you for the good seed which you planted in so many hearts. I am convinced that if there is a treasure to leave with the others in this world, it is good education, good teaching.”

“Together, we were so much more than we were separately,” said Tany. “As a father, he was very loving and generous with his time, playing [with the children] fully with energy and love.”

Warkentin had just begun teaching at St. Michael’s School, Pincher Creek, when he fell ill. On the morning before the funeral service, the extended Warkentin family visited the school. Students shared three African songs their late teacher had taught them, and showed the family the cafeteria they had papered with handwritten prayers.

Nine-year-old Danika offered encouragement in a letter to her father’s parents: “Don’t be sad about my dad even though we miss him down here, but up in heaven he is happy with God. I always try to think of that when I get sad.”

Wise and comforting words for all of those who loved Jeff Warkentin.

Countless prayers and condolences have been shared with the Warkentins from friends and supporters across Canada and Burkina Faso. In addition to the funeral service on Sept. 30, memorial services were held at North Leamington United Mennonite Church and at Home Street Mennonite Church, Winnipeg.

Former Mennonite Church Canada Witness worker Jeff Warkentin passed away at the age of 32 following a brief struggle with meningitis.