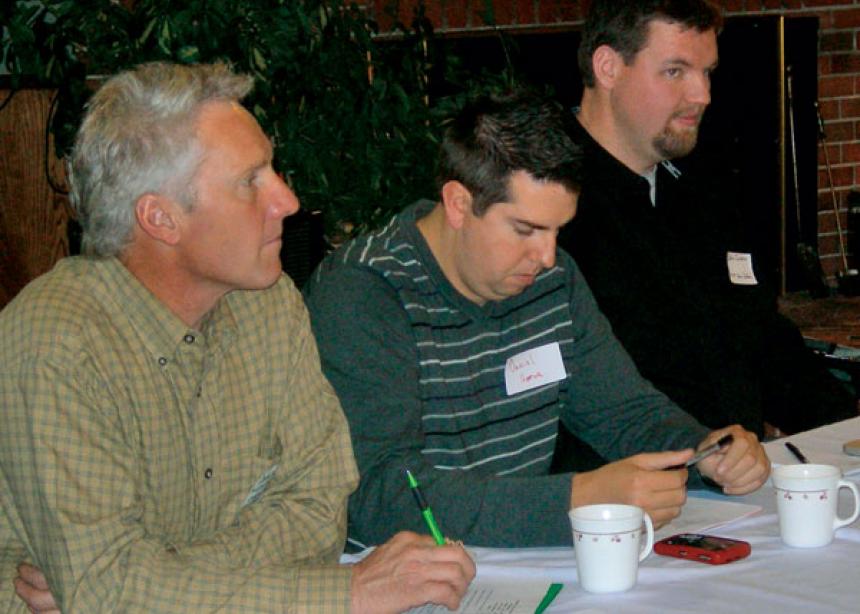 MC Manitoba board members Dave Wiebe, Dan Horne and Justin Zacharias listen as delegates share concerns about the budget and about how the area church can communicate more clearly with its member congregations.

“Do we want to keep on doing what we are used to doing or do we want to think in new ways?”

With the lack of a quorum and a budget that will possibly be unmet, this question was on the minds of many who gathered for the fall delegate session of Mennonite Church Manitoba at Camp Assiniboia on Oct. 21. Less than 75 percent of the required number of delegates showed up, so the board was unable to get approval for the congregational giving part of the area church’s proposed 2011 budget.

The board also decided on salary increases that will total about $11,000 in 2011—a 1 percent cost of living adjustment and increments. “This increase will need to be done by decreasing other expenses or increase self-generated revenue,” said Seals.

Unable to make a decision about the budget, the discussion moved from decision-making to wrestling with questions of quorum and unmet budgets. To date, less than 50 percent of the congregational budget for 2010 has come in. “Last year at this time it was quite a bit higher—at 58 percent,” said Seals. “We still need to receive about $356,000 before the end of the year.”

Delegates affirmed the programs of MC Manitoba, but questions of communication dominated the floor. Congregations want to receive information well in advance of meetings, so that budget planning and issues can be discussed ahead of time, leaders were told.

“Congregations need to see the face and heart of our conference programs,” one delegate reported from his table discussion. “Conference can be abstract and so we need to find more concrete ways to communicate what the conference does.”

“Quorum has been on the margin for five years in a row,” said board chair Hans Werner. “It is disappointing, but not particularly surprising.”

In response to a delegate’s question, “Is our quorum system archaic?” Werner acknowledged, “There is a shift going on. . . . We may have to find new ways of being accountable to each other. It is not always clear how one gets from here to there.”

Delegates called on the board to re-evaluate the present quorum system.

MC Manitoba staffing updates included a report that Aaron Nussbaum, an American citizen who was recently appointed as program director for Camping Ministries, is unable to assume the position because MC Manitoba could not secure a work permit for him.

“We are re-advertising the position,” said Pam Peters-Pries, interim director. “Applications close Nov. 15 and we hope to move quickly with a selection and appointment following that date.”

Board member Erin Morash submitted a report on the search for a new executive director. She reported on the challenges of matching leadership needs with prospective candidates’ sense of call, skills, availability and vision. She expressed hope that the interview process could be completed by the first week of November. 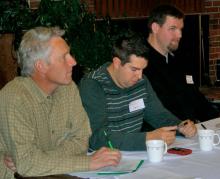 MC Manitoba board members Dave Wiebe, Dan Horne and Justin Zacharias listen as delegates share concerns about the budget and about how the area church can communicate more clearly with its member congregations.