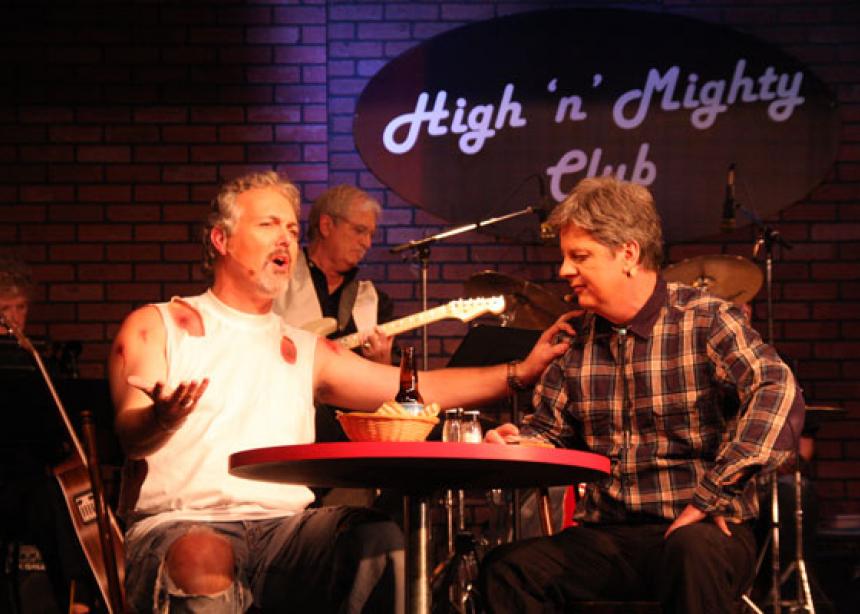 Ross Muir, managing editor of Canadian Mennonite, penned the lyrics to his blues’ opera, Job’s Blues, during one of the happiest times of his life, in 1988. The idea had been in his mind for a dozen years, ever since he had heard a twelve part sermon series on the Biblical book of Job while at the University of Victoria, B.C.

Three years after writing the lyrics he found himself re-reading the words and listening to blues recordings as he tried to make sense of the diagnosis of Amyotrophic lateral sclerosis (ALS, sometimes called Lou Gehrig’s disease) his wife Diane had received. With statistics pointing to 80 percent of victims dying within five years and over half of marriages breaking down, he felt like Job, having his security and sense of a future with hope torn away. Just as Job challenged God and came back, so did Muir, though he wasn’t always sure at the time he would, or could.

Fast forward to 2012 and Job’s Blues was finally performed. Directed by Peggy Raftis, The Grey Wellington Theatre Guild, in conjunction with The Grand River Blues Society, gave the opera a six performance over a two-weekend run at the Harriston Town Hall Theatre. The opera unfolds over two acts with Job’s lament ending the first:

Muir’s words were set to music by Chris Michie and Andy Kulberg and played by a band fronted by John Stewart. Music drives the opera forward with the scene where Job is tormented by his “friends” done in pantomime over “Seven Days of Silence.”

The entire story unfolds in the High and Mighty Club with God and Satan sitting in the background sipping wine (God—white; Satan—red). In the second act, the friends—Eric the “new age” Christian; Gregg the prosperity gospel Christian; and Sonny the fundamentalist Christian—each trying to convince Job of his sin.

Job refuses to bow until God meets Job and Job becomes convinced, as Muir puts it, of his finiteness, of his need for God’s presence in his life, for life to be complete. The opera ends on an “evangelical” note with the entire cast singing “Amazing Grace,” bringing reminders of John Newton the former slaver who penned the words to the familiar hymn. In Muir’s opera Job is a blues singer, married to a former stripper, who finds he is not independent but dependant upon God.

Though the cast were amateurs there was strong acting from Warren Wray (God), Mark McKechnie (Job), Christine Wick (Job’s wife) and Daryl Mejer (the bartender). The band, fronted by John Stewart, guitar, was “hot” with the audiences enthusiastically responding with applause and shouts as they performed the blues tunes.

Announced in local congregations (Muir and his family attend First Mennonite in Kitchener) there were a number of attendees from Steinman Mennonite in Baden. A series of sermons there had led into a formation hour discussion group on the issues raised in Job—the connection between sin and suffering; God’s goodness. Though Harriston is over an hour north of Waterloo many from local congregations attended, and Muir noted that the 275 seat theatre was never less than half full.

This was the third time interest had been shown in Muir’s work but the first to move through to performance. The current production has raised much interest, including by a professional theatre group in Toronto Muir cannot yet name.