Irony and challenge in Durban

On the eve of the event, Durban was in the midst of a dramatic and destructive increase in rainfall – after a spring of exceeding dryness. 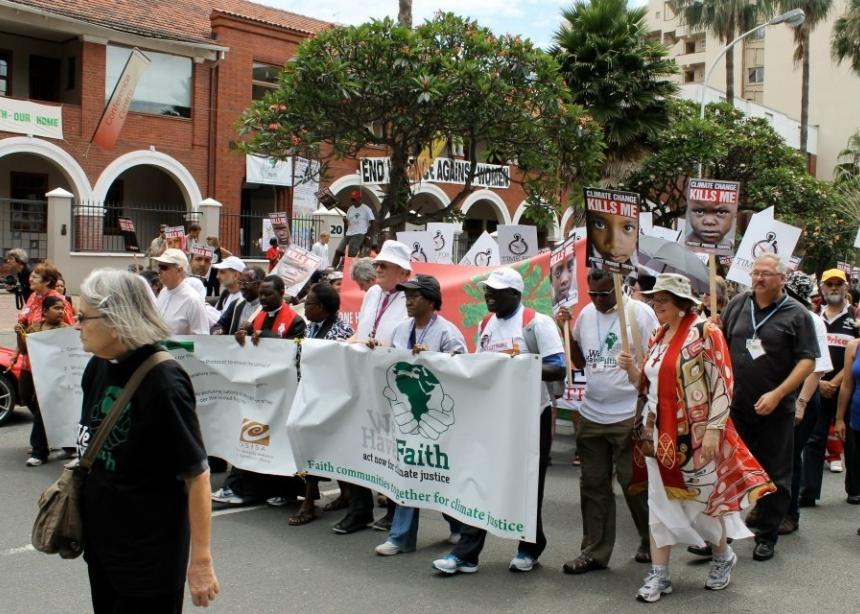 Willard Metzger (2nd row, right) marches through the streets of Durban in support of climate justice with other people of faith. – photo by Kaitlin Bardswich

For Mennonite Church Canada Executive Director Willard Metzger, the 2011 United Nations Climate Change Conference in Durban, South Africa was an eye-opening experience that began with a twist of  irony.

On the eve of the event, Durban was in the midst of a dramatic and destructive increase in rainfall – after a spring of exceeding dryness.

“I anticipated some reference to this obvious irony,” Metzger wrote in his blog. “But the irony was never recognised, or at least never mentioned.”

Metzger attended the U.N. climate change talks at the invitation of the World Council of Churches (WCC) A few weeks prior, he had shared a biblical perspective on climate justice with the Canadian Council of Churches and with Members of Parliament in Ottawa.  Metzger said he uses the term “climate justice” as a reminder that dealing with climate change and ensuring creation care is a biblical and moral imperative for people of faith.

Metzger reported on the Durban talks in his daily blog. He shared the pain of those who were suffering most and offered some statistics about their plight. Island states – like Fiji – are loosing homes and livelihoods as sea levels rise. Somalia reported that climate change was responsible for the deaths of 20,000 children and the malnutrition of 730,000 others in 2011. Thailand has lost 2/3 of their 2011 rice harvest to flooding. In Kenya, rising temperatures, soil erosion and drought has reduced the yield of the food staple maize to 5 bushels per hectare -  just 20% of what it was 50 years ago.

“From the delegates of the Pacific and Caribbean we are hearing the plea of people drowning and have simply continued the dialogue. It is almost unbearable to hear,” he wrote.

Metzger was particularly moved by youth delegates, whose frustration erupted in protest.  On Dec. 7, six members of the Canadian youth  delegation disrupted environment minister Peter Kent’s address by rising and unveiling T-shirts protesting Canada’s position.  On the front was the text “People Before Pollution” while the message on the back read “Turn Your Back on Canada”.  Their efforts were met with applause.

On Dec. 8 as Todd Stern, US Department of State was about to begin his address a young woman rose and loudly voiced her protests. The chair of the proceedings begged her to sit down proclaiming that “No one is listening to you” while the media scrambled to record her voice.

As the young woman was whisked away the frustrated chair could not quiet the applause.

“It was as if the growing frustration of many was saying back to the negotiators, “please sit down, no one is listening to you,” Metzger reflected. He said the irony of the statement weighed heavy on his heart.

“It is clear that the youth in particular are not willing to allow current leadership to determine their future. They know they will eventually be the leaders dealing with these decisions and so they want to have input into that future now,” Metzger said following the conference.

Despite his own discomfort with all that transpired in Durban, Metzger grew increasingly aware of the complexities of negotiations.  He and Tindal had the opportunity to meet with the Hon. Peter Kent, Canada’s Environment Minister on Friday Dec. 9.

“It was clear in our discussion that Minister Kent is trying to balance the two values of guarding Canada’s economy and the undeniable necessity to provide real impact in reducing Canada’s emission levels. This is not an easy task,” Metzger noted.

Metzger also had the chance to reunite with Elizabeth May, leader of Canada’s Green party and a strong supporter of climate justice. He had previously met her in Ottawa during his presentation to MPs.

"I am so grateful to Willard Metzger and Mennonite Church Canada for engaging in the climate issue,” May wrote following the conference. “Leadership from the faith community, framing our current global crises (ecological, financial and developmental) in moral terms, is key to recognizing that we are in a societal spiritual crisis. That reality shapes everything else.”

The Climate Change Conference ran overtime by two days and in the end, succeeded in extending the Kyoto Protocol from 2012 to 2017.  Negotiators agreed to make a deal with the Durban Platform for Enhanced Action, which will see negotiations begin again in 2015 for a new contractual arrangement to be effective by 2020.

To read more of Metzger’s insights about the Durban conference, see his blog “Willard Metzger – Church Guy” at http://willardmetzger.blogspot.com/

Willard Metzger (2nd row, right) marches through the streets of Durban in support of climate justice with other people of faith. – photo by Kaitlin Bardswich