The impact of one woman pastor’s ordination 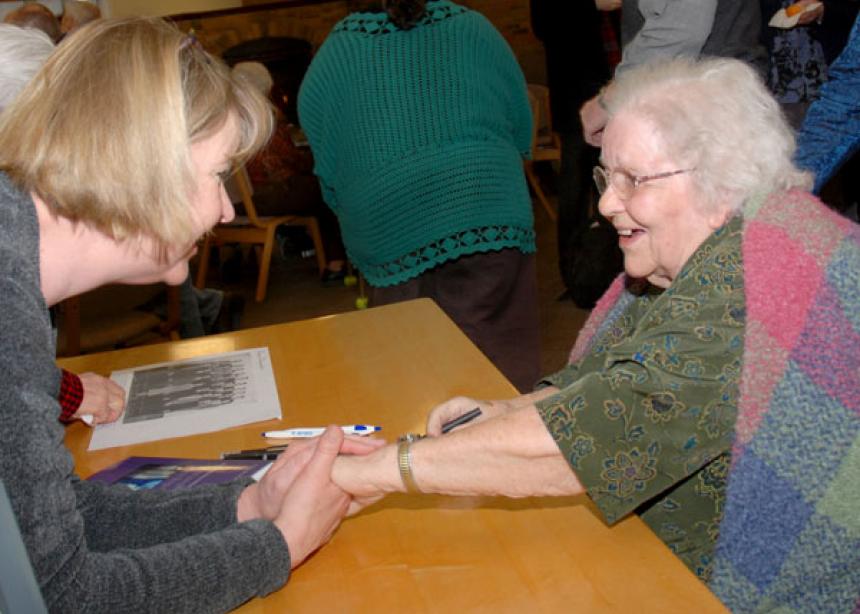 As Frances Ringenberg, left, a member of the pastoral team of Prairie Street Mennonite Church in Elkhart, Ind., greets Emma Sommers Richards at the celebration of the book about Richards’ ordination, Ringenberg said, ‘You were the first woman pastor I ever saw.’ Richards was pastor of Lombard (Ill.) Mennonite Church, where Ringenberg was a member b

By telling the story of the ordination of Emma Sommers Richards, a new book from the Institute of Mennonite Studies aims to show that “all church members will share in the benefits and blessings that God will shower on faithful Anabaptist Mennonite congregations.”

The impact of this first ordination of a Mennonite woman pastor is shared from a variety of perspectives in According to the Grace Given to Her, just released by the Institute at Anabaptist Mennonite Biblical Seminary (AMBS). Three editors, James E. Horsch, John D. Rempel and Eldon D. Nafziger, and nearly 20 contributors describe the influences and themes of Richards’ life that led to her ordination and reflect on what it meant in their lives and ministries.

The book begins with Miriam Book describing the setting of the call to women to serve in the Mennonite church. Then Elaine Sommers Rich, Richards’ sister, tells about influences in their family life. Arlene Mark tells about other early influences through education and church involvement, and Nancy V. Lee tells about the ministry of Richards and her husband Joe as missionaries in Japan.

Following each of these and the additional chapters are testimonials from pastors for whom Richards was a mentor or source of inspiration, including Dan Schrock, John Gray, Rachel Fisher, David Sutter and Janice Yordy Sutter.

Emma Richards was ordained in June 1973 by the Illinois Mennonite Conference at the request of Lombard Mennonite Church, where she was serving on the pastoral team. “It was an ordination that marked a breakthrough in North American Mennonites’ understanding that the Holy Spirit calls forth both women and men,” said institute director Mary H. Schertz at a celebration of the book’s release earlier this year.

Also at the celebration, Gayle Gerber Koontz, AMBS professor of theology and ethics, emphasized the significance of this ordination for the church. By 1987, a little more than a decade after Richards’ ordination, in the General Conference Mennonite Church there were 44 women licensed or ordained in ministry positions, an estimated 10 percent of pastoral leadership. “In what we used to call the Old Mennonite Church, by 1986 about 32 women were serving as licensed or ordained pastors, co-pastors, associate or assistant pastors,” Gerber Koontz pointed out. “Two years later, the number of women with credentials for pastoral ministry in the Old Mennonite Church jumped to 62. That decade after Emma was ordained was a huge shift.”

In their preface to the book, the editors say they hope “through the story of Emma’s call to ministry, all brothers and sisters in the church will see that Holy Spirit gifts given to women need to be encouraged for the well-being of the whole body of Christ.” 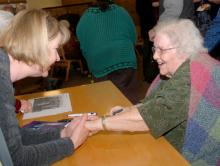 As Frances Ringenberg, left, a member of the pastoral team of Prairie Street Mennonite Church in Elkhart, Ind., greets Emma Sommers Richards at the celebration of the book about Richards’ ordination, Ringenberg said, ‘You were the first woman pastor I ever saw.’ Richards was pastor of Lombard (Ill.) Mennonite Church, where Ringenberg was a member b