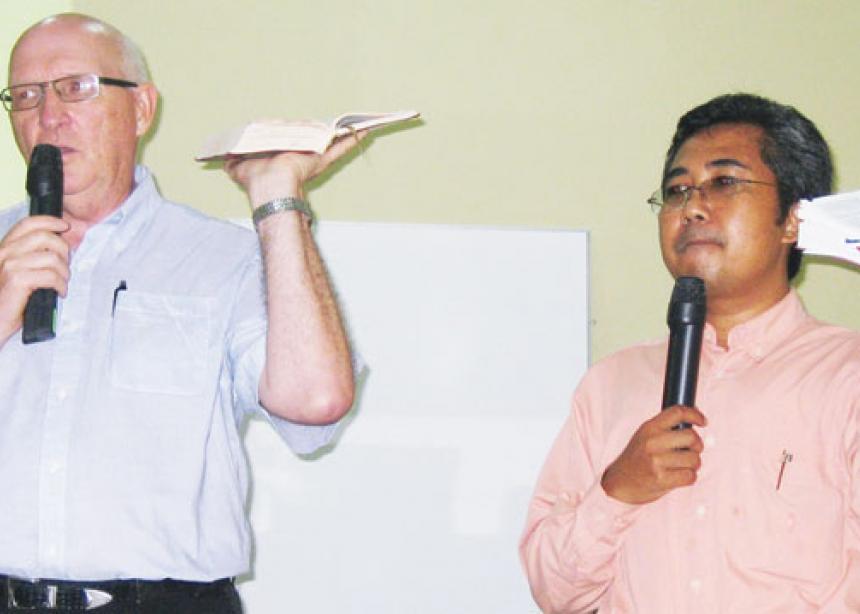 “Our children and young people have no idea what it means to be Anabaptist or Mennonite. What is MWC going to do about that?”

This concern, forthrightly expressed, came from a congregational leader in India during one of dozens of teaching sessions in which I participated last fall in India and Indonesia.

The leader’s challenge was at the heart of why Mennonite World Conference (MWC) member churches in the region had invited me, MWC North American representative Bert Lobe and our wives, on this fraternal visit under MWC’s Global Gift Sharing Project.

Pastors, Bible teachers, evangelists and other church leaders in both countries echoed similar concerns to that of the Indian leader. Their feedback highlighted two important realities:

The concern for identity often came up when discussing the challenges of leadership and pastoral development. The pastors in one of the synods in Indonesia, for example, had graduated from 43 different seminaries, none of them Anabaptist-related. We understood why the conference leaders spoke of how difficult it is to embrace a common Anabaptist identity.

The flip side, however, was the pure amazement, joy and resonance that leaders expressed when they heard focused and articulate presentations of what the Radical Reformation theological stream has added to the other streams, both in history and in their present realities. One of the slides I developed was a very simple explanation of the profound shifts in understanding of church and discipleship in the fourth century when the Christian faith became legal and obligatory in the Roman Empire. This was very new to the participants.

A week later, as we visited congregations in the Raipur region of India, the young people who had attended the first workshop had already convened more than 100 other young people to share with them the slide that I had developed. “Now we can see that it makes a difference what we connect to,” they said.

Does churchly and theological identity matter? While we all desire to be “Christian” before we are anything else, the fact is that we are “Christian” according to some identifiable theological foundation. Even those who espouse generic, non-denominational identities have foundations that distinguish them from others. A non-choice is also a clear choice.

“So what is MWC going to do about it?” To the leader in India, I responded with two points:

In 2004, Mennonite Church Canada identified the teaching gift of then general secretary Robert J. Suderman and offered his time to do theological teaching in the global MWC community as part of the Global Gift Sharing Project. Following his retirement last summer, he undertook the India and Indonesia trip. Suderman serves on MWC’s Peace Commission as assistant secretary and as co-secretary of the MWC/Seventh Day Adventist conversations.