Devoted most of his life to Anabaptist history, research and
thought 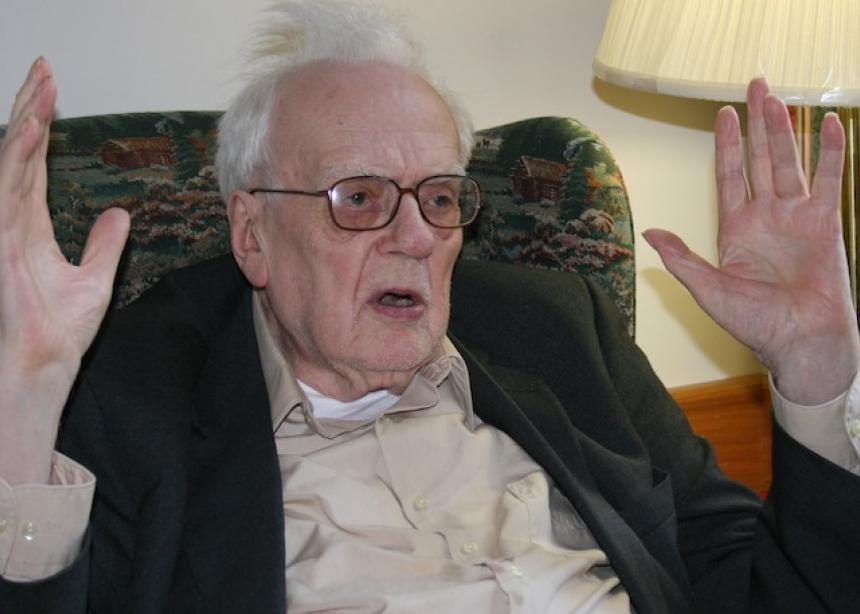 Irvin B. Horst, a former Eastern Mennonite University professor who devoted most of his life to Anabaptist history, research and thought, died Apr. 23, 2011, at Virginia Mennonite Retirement Community.  He was 95.

Dr. Horst taught church history and English literature courses at EMU from1955 to 1967. During this time, he worked to increase holdings at the Menno Simons Historical Library in EMU’s Hartzler Library. He became the historical library’s most influential benefactor, collecting hundreds of books dealing with Anabaptist-Mennonite heritage and local Shenandoah Valley history.

Horst moved to the Netherlands in 1967 to become professor of Mennonite history at the University of Amsterdam, a position he held until his retirement in 1987. During this time, he continued his searching and collecting books for the historical library on the European market.

“Irvin’s contribution to the Historical Library lay in his knowledge of the fields of Mennonite and Reformation history and knowing what books and authors were important for us to collect,” said Lois B. Bowman, Menno Simons Historical Library librarian.  “We are fortunate that Irvin collected so many books when it was still possible,” Bowman added, noting that the rising cost of collecting rare books has restricted the library’s ability to add to its collection as much in recent years.

In 1946, Horst went to Europe to do postwar relief work while searching far and wide for books in Dutch, German and English to give or sell to the historical library.

In April, 1987, Horst was named “scholar-in-residence” at the place near and dear to him, the Menno Simons Historical Library at EMU.  The university released a book, “Menno Simons: A Reappraisal,” in January 1992 and dedicated to Horst as a “festschrift,” a book published in  honor of a scholar. The 225-page hardback was a compilation of the addresses given at a Conference on Menno Simons held at EMU in 1990 and edited by Gerald R. Brunk, professor emeritus of history. A plaque was unveiled in his honor naming the Special Collections Room in EMU’s Historical Library after Horst.

A memorial service will be held Friday, Apr. 29, at VMRC with EMU president emeritus Myron S. Augsburger and pastor John Lehman presiding.  Memorial contributions may be made to the Mennonite Simons Historical Library c/o the development office, EMU, Harrisonburg VA 22802.