How do pastors keep the Sabbath?

September 24, 2014 | God at work in the Church | Number 19
Story and Photo by Donna Schulz | Saskatchewan Correspondent 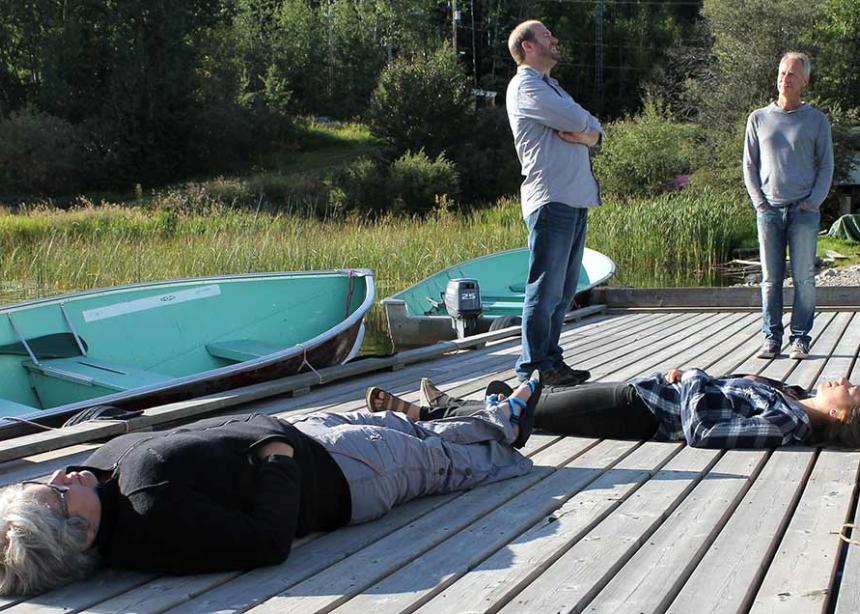 The slogan on Ric Driediger’s T-shirt bears witness to his preferred way of spending the Lord’s Day. The veteran canoe guide and member of Mennonite Church Saskatchewan’s Pastoral Leadership Commission, welcomed pastors and their spouses to a time of Sabbath rest at Churchill River Canoe Outfitters in Missinipe, Sask., from Sept. 2 to 5, for the area church’s annual fall pastors gathering.

A pastor’s work is not necessarily physi-cal, nor does it always have readily identifiable goals. How then do pastors engage in purposeful work? Bergen proposed that to do so they must rid themselves of hindering motivators like seeking praise or fearing criticism.

Driediger observed that, “in order to have Sabbath you have to have worked.” But how do pastors, who most often work Sundays, observe the Sabbath?

For Rose Graber of Regina’s Grace Mennonite Church, Sunday isn’t a day of rest. Recognizing her need for time with God, Graber takes Sabbath rest in various ways throughout the week. Mennonite Nursing Home chaplain Patty Friesen enjoys Sabbath rest on Thursdays with her husband, Patrick Preheim, who is also a pastor. Lois Siemens of Superb Mennonite Church distinguishes between Sabbath and days off: “Sunday is my Sabbath; Monday is my day off.”

Craig Neufeld of Rosthern Mennonite Church views Sabbath as restoration and sees Sundays as a time for restoring relationships, energy and order. “I don’t feel bad about doing laundry on Sundays because, for me, that is restoring order to my life,” he said.

Bergen said there is something counter-cultural about observing the Sabbath, and Driediger concurred, noting that Jesus’ counter-cultural Sabbath practices frequently got him into trouble with the religious authorities.

Graber said that observing the Sabbath is about being together in Christian community. But, she lamented, people are not attending church like they used to. “How can we be community if we don’t meet together?” she asked.

While worship and reflection are certainly part of Sabbath rest, so is recreation. The Driedigers offered their guests a va-riety of activities throughout the retreat.

A number of intrepid explorers, led by Bergen’s son Nick, who is a guide at the camp, enjoyed a hike through the muskeg to a lookout over a deep crevice, which even Driediger had never seen.

A larger group opted for a more sedate pontoon boat tour of Otter Lake with a stop at an Anglican church in the indige-nous community of Grandmother’s Bay.

A few also experienced a refreshing dip in the lake.

Driediger’s wife Theresa took a small group blueberry picking, with the fruits of their purposeful work a welcome addition to breakfast the next morning.

On the final afternoon of the retreat, Driediger took the entire group to see nearby Otter Rapids and listen to some “tall tales” on the shores of Devil Lake.

The week’s activities revealed that purposeful work takes many forms, as does Sabbath rest. During the final devotional session, Abe Buhler, pastor of Zoar Mennonite Church in Langham, thanked the Driedigers for their hospitality, saying, “This retreat has been a real Sabbath for me, and you have been the hosts of the Sabbath.” 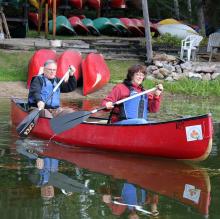 Ric Driediger, at the rear of nearest canoe, and Walter Jantzen of Horse Lake Mennonite Church set off in one canoe, while their spouses, Theresa Driediger and Esther Jantzen, paddle another. 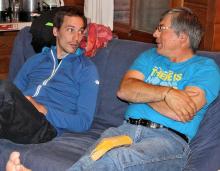 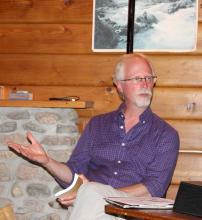 Paul Bergen, a chaplain at the University of Alberta Hospital in Edmonton, leads one of several devotional sessions during MC Saskatchewan’s fall pastors’ gathering. 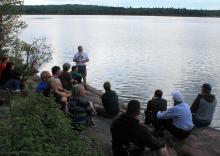 Host Ric Driediger, standing, entertains MC Saskatchewan pastors and their spouses with a few ‘tall tales’ on the shore of Devil Lake. The pastors were there as part of MC Saskatchewan’s fall pastors gathering.