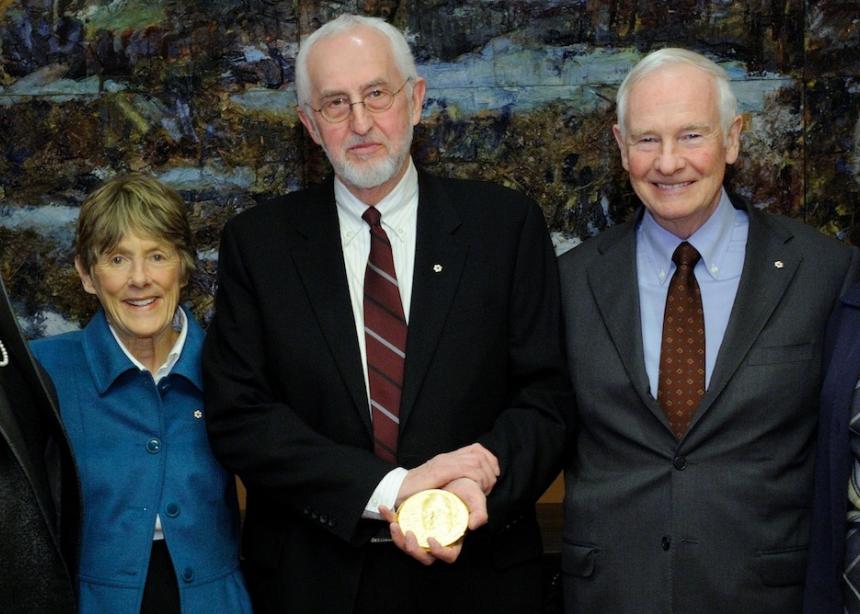 in peace and disarmament,” Ernie Regehr of Waterloo received the 2010 Pearson Peace Medal in formal ceremonies here in Rideau Hall.  The remarks were made by Nancy Wildgoose, national president of the UNA-Canada.

The medal honours a Canadian who has personally contributed, through working and volunteer commitments, to the causes that Lester B. Pearson, Prime Minister from 1963-68, worked for during his career:  aid to the developing world, mediation in situations of armed conflict, aid to refugees and the needy, equal rights and justice for all, and peaceful change through laws and world organization.  Because the Governor General of Canada is a patron of the UNA-Canada, he presented the medal to Regehr.

Regehr, the 26th recipient of this honour, which was first awarded to Paul-Émile Cardinal Léger in 1979, was recognized for his work with Project Ploughshares and his involvement in a number of Government of Canada and United Nations initiatives.  Regehr co-founded Project Ploughshares in 1976 and his wife Nancy initially volunteered in administrative and financial matters before fulfilling the same function as staff.  Funding initially came from church and NGO grants (Mennonite Central Committee, The Quakers, CUSO). Other churches joined later, and, with the development of the fundraising program in the 1980s the primary source of funds became donations from individual Canadians, supplemented by foundation grants and projectfunding from the Government of Canada.

In his speech to the assembled body, Governor General David Johnston cited Regehr as a “worthy heir to Lester Pearson and the other noteworthy Canadians” who have won the award in the past.  Departing from his prepared text, the Governor General reminisced briefly on his years in Waterloo as president of the University of Waterloo. He spoke of his friendship with Regehr, and his respect for the Mennonites and for Conrad Grebel University with its emphases on peace studies as part of the University of Waterloo affiliated Universities.

Wildgoose especially noted the role that Regehr and Project Ploughshares played in mentoring others and in helping youth to understand how they can contribute to issues essential to the future communal peace and security of our world.  This mentoring role was emphasized by the presence at the ceremony of many young people, some of whom were associated with the UNA-Canada. Wildgoose also quoted from Regehr’s writing in a Project Ploughshares Annual Report:  “While we measure our work by meetings held, reports written, presentations made and funds raised, in the end it is our impact on the safety and well-being of people that must be the measure of our success” – a measure that cannot be made with certainty, he added, but we continue to work in the faith that we can be a “transforming reality.”

Regehr received a standing ovation from the audience that included other Pearson Award winners, Pearson family members, Regehr’s family and friends, civil society representatives, government officials,and members of Parliament. Regehr, who adds this award to a list of other prestigious awards including the receipt of the Officer of the Order of Canada in 2003, noted in his remarks that the award celebrates “a collaborative civil society that works with counterparts around the world to expand and support civic engagement” but the engagement “is not simply a matter of recasting convictions into lists of non-negotiable demands.”

He noted that “to public debate… we bring a clear perspective,relevant information and experience, and empathy for the victims of injustice. The aim is … to help mold the compromises and shape the common ground that produce, not perfect, but more equitable solutions.”