September 10, 2014 | God at work in Us | Number 18
Story and Photos by Dave Rogalsky | Eastern Canada Correspondent 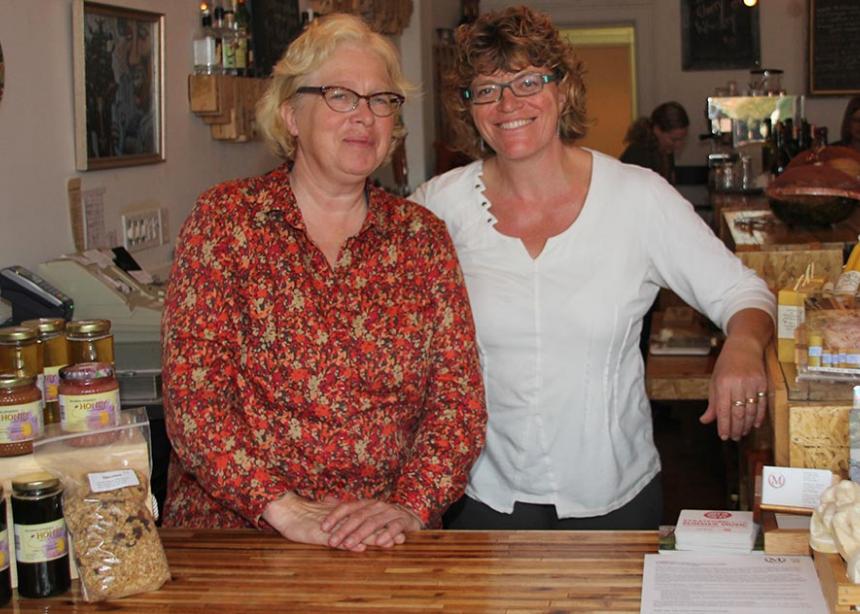 <p>Ruth Klahsen, left, and Francis Evans stand at the counter of the Monforte on Wellington osteria in downtown Stratford, Ont. Klahsen is fond of saying that she would not open the restaurant until Evans signed on as a hostess (Photo by Dave Rogalsky)</p>

From a Mennonite Brethren background—her grandparents and parents were missionaries in India—Klahsen has been featured in several Mennonite Savings and Credit Union articles for her unique use of community shared agriculture (CSA) techniques and for being one of the first new members who joined the Credit Union by agreeing to the Mennonite World Conference’s “shared convictions” instead of by belonging to a Mennonite or Brethren congregation.

When pressed, Klahsen notes that she is not worshipping as a Mennonite and has some concerns about Mennonite business practices. When she founded her first cheese factory (www.monfortedairy.com) in Millbank, Ont., a few years ago, she leased space in a building that housed several other factories like hers producing cheese with milk from Old Order Mennonite and Amish farms.

Beginning with a $167,000 loss in her first year there, she went on to make $150,000 in profit on $1 million in sales by her fifth year. Then her lease was not renewed with just a few months’ notice and she had to relocate. But cheese factories have specific building requirements for health reasons, and the abrupt cancellation drove her into bankruptcy.

After a year off, Klahsen reopened in Stratford using monies raised through a CSA offering. Investors contributed money upfront to be paid back over five years in product worth 150 percent of the investment; they also accepted the risk that the project could fail and they would not be paid back.

Four years later, she is grossing $2 million annually, aiming toward $2.2 million, her “sweet spot,” as she calls it, where she can afford to pay herself as much as her full-time employees.

With her books open to investors and staff alike, she speaks openly about the business: 30 percent each of the gross goes to labour, food costs and fixed costs, and, hopefully, 10 percent to profit.

Her cheeses are bought by high-end restaurants in Toronto and qualify for a “100-mile diet” there, as well as by delicatessens all over southern Ontario. When the location of the cheese factory in an industrial area of south Stratford did not get enough local sales, she opened Monforte on Wellington, an osteria (an eating establishment modelled after rustic Italian wine bars) in the downtown area. Along side serving dishes made from cheese and other local products, the osteria also sells Monforte cheeses to regular customers who stop in.

Between the cheese factory—which makes cheeses from sheep, goat, water buffalo and cow milk— and the osteria, Monforte currently employs 28 staff, seven of them full-time.

But Klahsen has further plans. A 16-hectare farm has been purchased between Stratford and Shakespeare. There, young farmers will be encouraged to try out sustainable farming and business practices in specialty crops of organic grains, fruit, hops for beer, honey, vegetables, nuts and milking animals. A house on the property will be reworked into a store where local artists and artisans can sell their creations. Another CSA fundraiser has been begun to raise another $500,000 to get this project off the ground.

Openness, sustainability, and local products, source materials and jobs make up Ruth Klahsen’s business practices. Do they make her a good Mennonite?

Ruth Klahsen, left, and Francis Evans stand at the counter of the Monforte on Wellington osteria in downtown Stratford, Ont. Klahsen is fond of saying that she would not open the restaurant until Evans signed on as a hostess (Photo by Dave Rogalsky)

Rosy Neale removes cheeses from their moulds at the Monteforte Cheese Factory in Stratford, Ont. (Photo by Dave Rogalsky)