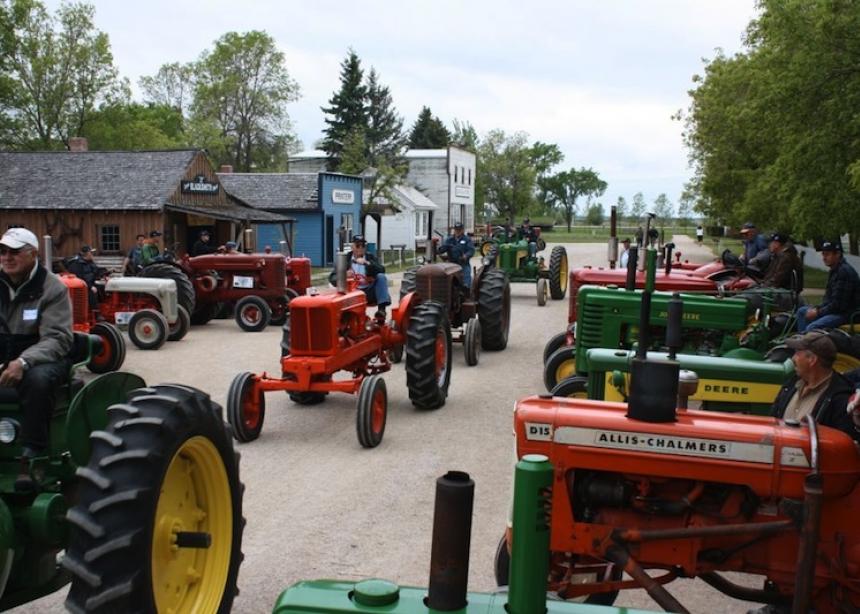 Forty-seven tractors chugged their way through the Manitoba villages of

Blumenort, Mitchel, Kleefeld, and then south and east of Steinbach ending up back at the Mennonite Heritage Village to raise $34,000 for the Village and the Eden Foundation Saturday, June 4 in the second annual Tractor Trek fundraiser.

Beginning with a hearty breakfast at the Mennonite Heritage Village livery barn, the trek began from the Heritage Village Main Street promptly at 10:00 a.m.  Along the 56-kilometer trek, people stopped their cars to watch and take pictures of the line of tractors. Some pulled out lawn chairs to view what amounted to a summer parade.

All except two tractors completed the trek.

One participant noted the beauty of driving tractors along country roads. “I frequently drive some of these roads and never see the nice gardens, flowers and the beautifully kept homes. But from a slow-moving tractor, feeling the wind and sun, it gives me a new perspective and appreciation for the lovely countryside around Steinbach. A tractor just feels like it belongs to the land.”

The stop in Kleefeld at noon gave local residents the opportunity to see the tractors up close—many of which had been beautifully restored. Trekkers had lunch in the local park and then resumed their journey.

Some might find it an unusual marriage that a heritage museum teamed up with a mental health service in a fund-raiser, noted Ken Reddig of Eden Foundationat the wind-up event. “The Mennonite Heritage Village represents a faith community that came to the Manitoba prairies to build a new life. As the community matured it created a variety of organized services for its own people and the larger community within which it lives. One of those organizations is Eden Health Care Services, a group of mental health services which operates in Winkler, Winnipeg and Steinbach. Eden is an outgrowth of the kinds of community that the Mennonite Heritage Museum commemorates.”

Back at the museum, the trekkers were joined by family and friends for a banquet and a number of awards including awards for the smoothest running, quietest running and best restored tractors.

The $34,000 is to be divided equally between both organizations.