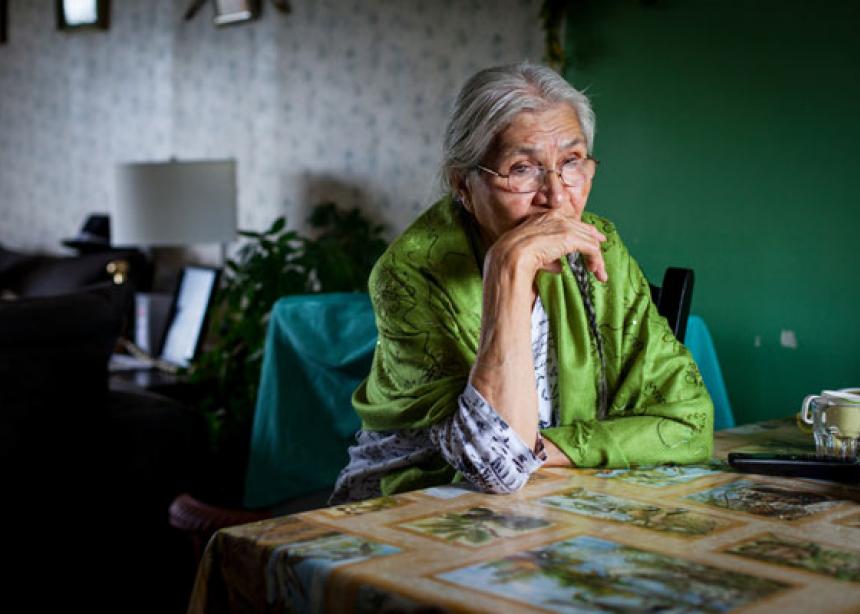 <p>Madeline Spence of the Nisichawayasihk Cree Nation at Nelson House, Man., says ‘Our land used to be so good; the shorelines used to be so different.’</p>

The director of Mennonite Central Committee (MCC) Manitoba at the time told me two issues stirred up the most flak from constituents: MCC’s work in Israel-Palestine and its involvement with hydropower issues in the north.

That was a dozen years ago. I was MCC’s hydro guy.

After three-and-a-half years I quit that job. The opposition I faced from the MCC board and constituency made the work untenable. Looking back, I wish I had handled some things more graciously, but, regardless, advocating for better treatment of indigenous people and land affected by hydro dams was just “too political,” as they say, for the organization.

In the past few years, I have returned to hydro-related work during the hours I’m not writing for Canadian Mennonite. I am the lone staffer with the Interchurch Council on Hydropower, for which MCC serves as a valued member, funding source and website host.

The climate has shifted somewhat now. Manitoba Hydro is on its heels as people from all sides question its plan to gamble $20 billion on two huge new dams and related transmission lines. The provincial Tories, a former NDP energy minister and the publisher of the Winnipeg Free Press have all said the plan is too risky.

Our little church group has jumped into this charged political climate with a few opinion articles in the provincial paper of record—the Free Press—and a new photo exhibit that explores the complicated reality of northern hydropower.

Photographer Matt Sawatzky, a graduate of Canadian Mennonite University in Winnipeg, and Cree elder Ellen Cook, who is co-chair of our council, travelled to four hydro-affected communities last fall to gather images and stories. The result is an exhibit entitled “A Sad Sort of Clean.” It consists of 22 large photos along with a half-hour video. The exhibit, which is at the Flatlanders gallery in the Winnipeg Centre Vineyard Church until June 30, will also be available for church and community events, such as an upcoming United Church regional annual general meeting.

In the take-home postcard that accompanies the exhibit we ask whether hydropower is truly clean, as the utility brands it, given the ongoing extensive environmental damage depicted in the photos. We also suggest that innovative energy conservation measures could be a cheaper, greener and entirely realistic option to pouring ever more cement into rivers.

While our work may be somewhat less controversial than in the past, it is still well out on the obscured periphery of church activity. In a way, that’s okay. Not everything can be or should be at the centre.

That said, I think the spiritual significance of faith-based work on these sorts of current “political” issues could be better understood within the faith community. What does faith have to do with megawatts? Does Jesus care about dams?

Like many other large-scale resource developments, dams in northern Manitoba have left deep wounds on the land and in people’s hearts. Our photo exhibit makes this clear. Our consumption harms people and the good lands God created. I see our group’s work as a simple expression of love for people at the northern end of the transmission lines and an expression of respect towards creation. I see our work as the work of healing a broken relationship.

When I’m talking to a northern fisherman or elder about the anguish and frustration of hydro impacts, the spiritual significance of the work feels obvious and deep. We connect on a spiritual level.

Other aspects of the work are more complicated and nuanced. Speaking publicly about a high-stakes issue gets messy. Dams are not black and white. They do not have carbon-spewing smokestacks, but to call them clean, as government and Manitoba Hydro do, ignores the obvious damage up north.

I welcome the challenges that these factors present. I think the faith community should move toward, rather than away from, contentious, complicated issues, in part because we cannot disassociate ourselves. As consumers, we are involved every time we flick a light switch. We are in a relationship whether we admit it or not.

There is great potential to be involved in an intentional constructive way, a way that welcomes candid dialogue with all parties, takes seriously Jesus’ words about “the least of these,” thinks creatively about environmental and economic justice options, and returns continually to the need for love and healing.

For more on the Interchurch Council on Hydropower, visit http://energyjustice.mcc.org.

Madeline Spence of the Nisichawayasihk Cree Nation at Nelson House, Man., says ‘Our land used to be so good; the shorelines used to be so different.’

Herb Cook of the Misipawistik Cree Nation at Grand Rapids, Man., surveys a shoreline littered with logs from eroding shorelines on the Cedar Lake hydroelectric reservoir.

Photographer Matt Sawatzky at the May 3 opening of ‘A Sad Sort of Clean,’ an exhibit of his photographs.