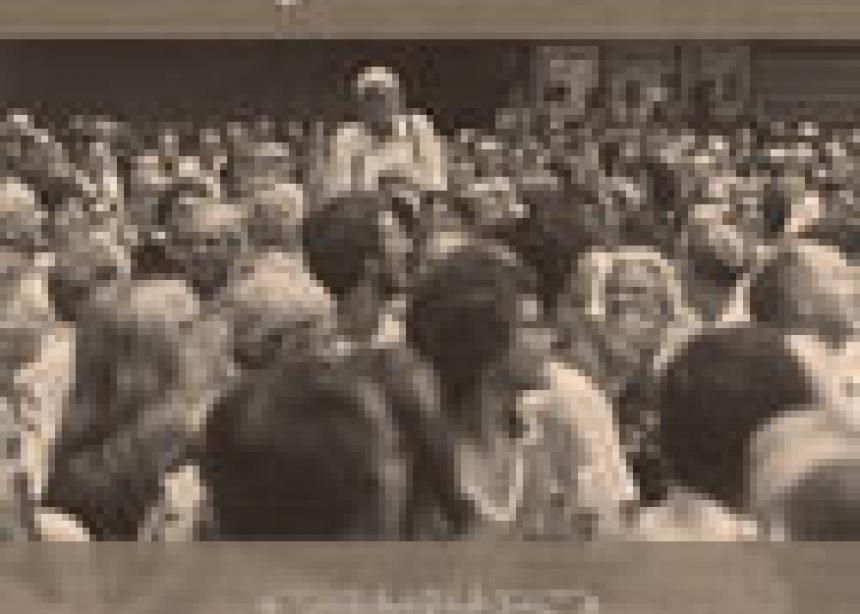 The way Mennonites talk about peace has changed in the past 100 years. While our grandparents talked about “nonresistance,” today we are apt to relate peace to “justice.” Stutzman, executive-director of Mennonite Church U.S.A., takes a careful look at what was written, especially in church periodicals, to trace how and why these changes happened.

Through the 20th century, the articles written in Gospel Herald show many heated debates over the role and meaning of “peace.” In the early part of the century, Mennonites who read Gospel Herald generally saw themselves as very separate from the world and their peace theology meant they were conscientious objectors in time of war. In the second half of the century, partly influenced by John Howard Yoder, they came to believe that a more active role in society was important. Mennonite Central Committee established an office in Washington, D.C., and Mennonites began more active peacemaking. Peace became associated with social justice.

As Mennonites became more involved in the broader society, and invited those who were not raised Mennonite to join, the question of Mennonite identity loomed large. The church has struggled with the question of whether or not all members are expected to be pacifists. Can a Mennonite work for the military? At the same time, there were always those who questioned whether an emphasis on justice and peacemaking ignores the importance of evangelism and salvation.

Stutzman focuses his study primarily on the former Mennonite Church (MC),  who were descendants of Swiss/South German Mennonites, but he does include information about the former General Conference (GC), who were predominantly descended from Dutch/North German/Russian Mennonites. His assessment of the differences between these two groups explains some of the challenges in amalgamating to form MC U.S.A. and MC Canada.

He has some good insights into the fact that MCs had been accustomed to a more centralized authority, while GCs expected congregational autonomy. His Appendix 2 provides a concise MC/GC comparison in chart form.

Although Stutzman focuses primarily on what was happening among MCs in the United States, Mennonites in Canada have had similar experiences. It is fasci-

nating to see how our church has changed over the years, something we often don’t realize until shown by this kind of study.

I found Stutzman’s explanation of the Mennonite connection with fundamentalism a bit oversimplified, but very much appreciated his analysis of the last 50 years. He recognizes that beliefs about peacemaking are very complex.