An evening of fun, food and good causes 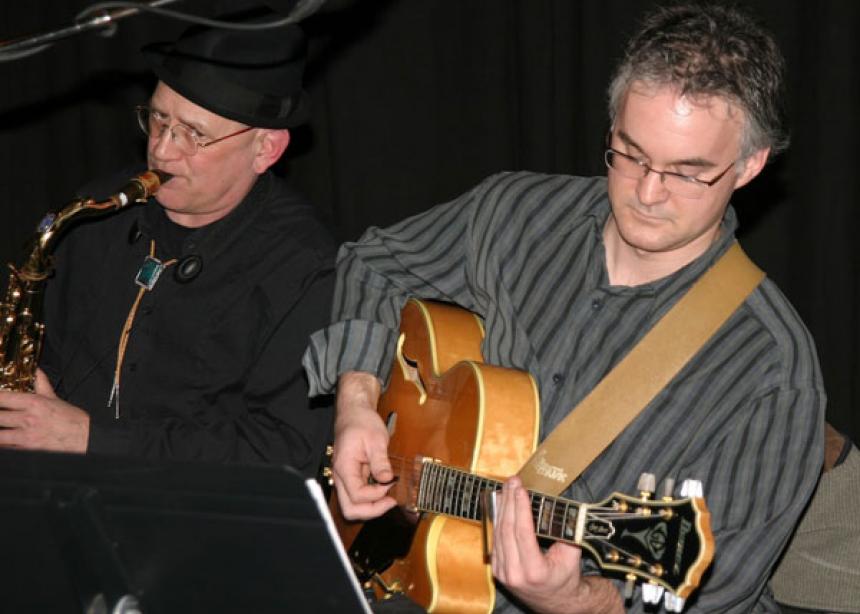 and Louisiana in Kitchener’s Conrad Centre for the Performing Arts on a cold January evening for John Bergen’s (City Café and Bakery) 8th Annual Epicurean Hootenanny.  This mouthful could be pronounced (ɛp.ɪˈkjʊə.ɾi.ən 'hu.tə.na.ni) in either a tony Toronto Rosedale accent (ɛp.ɪˈkjʊə.ɾi.ən) or in a southern Mississippi fashion (ɛ:ɪp.ɪˈkjʊəɹ:n), but is best said with a plate full of gumbo, shrimp, spicy sausage and coleslaw, while sipping a glass of wine in the crowded corridors and foyer of the Conrad Centre.

Food is only one of three or four foci for the evening.  Backed by a hot house band various groups sang southern inspired songs like Allannah Miles’ Black Velvet and Neil Young’s Southern Man. While some acts were serious – bass-baritone Dan Lichti sang Joshua Fit the Battle of  Joshua - others – like the Rockways,  made up of women from Rockway Mennonite Church conscripted by Bergen, singing 9 to 5 dressed as Dolly Parton – were there for the comic relief.  In true Hootenanny fashion all songs were sing-along with the crowd joining in lustily.

Bob Janzen, “with his trusty sidekick Henry Schmidt” and Bergen had “travelled the back roads of Mississippi and Louisiana from Memphis to New Orleans to bring true authenticity to this year’s Hootenanny.”  Janzen was the MC with his deadpan comments.  Humorous video clips were played of him as he asked southerners for advice on music for the Hootenanny. Outside Graceland, Elvis Presley’s mansion he received his sole suggestion - Presley’s Jailhouse Rock.

At $85 a person the evening was not inexpensive, but $50 of that went to Mennonite Central Committee and VOICE (for hearing impaired children), raising over $10,000. For the second year in a row the event was sold out and Bergen is already planning for next year, hoping to better this year’s food, fun and music. 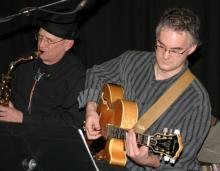 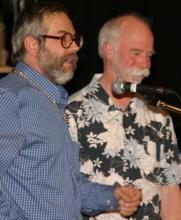 John Bergen (l) with Bob Janzen at the 2011 Epicurean Hootenanny 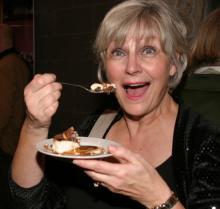 Buffet dinner at the 2011 Epicurean Hootenanny 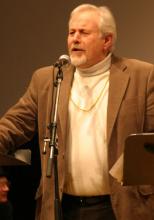 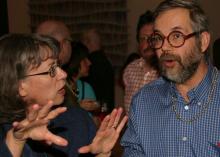 The Rockways belt out “9 to 5”, made famous by Dolly Parton.