Saskatchewan community developer wins award for service to others 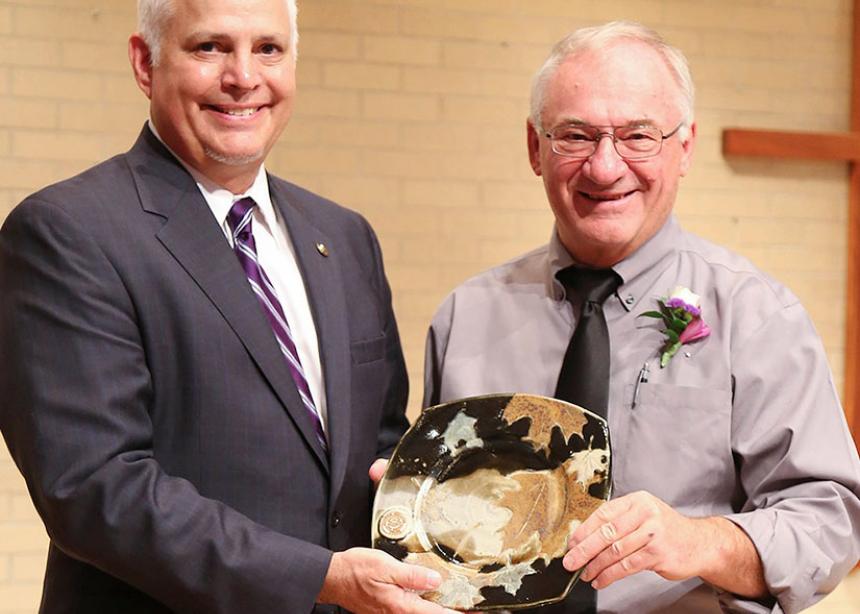 “Everything I’ve done has been a team sport,” quips Ray Funk as he reflects on his life’s achievements.

The community developer and former Member of Parliament was awarded Goshen (Ind.) College’s Culture for Service Award at the college’s fall convocation and homecoming on Oct. 3. The award is given annually to two or three alumni who exemplify the college motto, “Culture for service,” having distinguished themselves through lifelong service to others.

Funk was nominated for working at justice issues on behalf of Canada’s Indigenous Peoples during his years in federal politics and also for building bridges through economic development in northern Saskatchewan’s first nation communities. He didn’t think there was much chance he would win, though, because he hadn’t published papers or written books, as some other nominees had. Nevertheless, when told he would be receiving the award, Funk says, “I was delighted.”

Funk doesn’t see himself as a self-made man. He says receiving the award “made me grateful for all the people who mentored me along the way,” from pastors and Sunday school teachers at Tiefengrund Mennonite Church, where he grew up, and teachers at Rosthern Junior College, where he attended high school, to professors and classmates at Goshen College, where he earned his undergraduate degree in sociology in 1969.

“It’s important to stay rooted in community,” says Funk, and he speaks with warmth of the various communities he has been part of in his adult years. After his time at Goshen, Funk moved to Ontario, where he worked in adult education and community development. He later returned to the United States to earn a master’s degree in adult education from Michigan State University.

Eventually, he returned to Saskatchewan, where, in 1985, he and his wife, Shirley Falstead, established Spruce River Research. The non-profit organization fosters economic development in indigenous communities through feasibility studies, strategic planning and implementation, adult education, and negotiations between communities and government or communities and industry.

In 1988, Funk was elected as a Saskatchewan MP for Prince Albert-Churchill River, a seat he held until 1993. During his time in office, Funk worked at numerous peace and justice issues, including introducing a peace trust fund bill, which was not passed.

“Everything I’ve done,” says Funk, “[whether it was working with] the first nations, politics, Mennonite Central Committee, all of it has been a team effort.”

In his acceptance speech, Funk reflected on his understanding of the “Culture for service” motto. “The culture is not there to fuel the war machine, . . . to power the corporate empire, . . . to feed the fame factory,” he said. “The culture is there to feed the hungry, to heal the sick, to build community and to take care of Mother Earth for our children and grandchildren.”

Funk, a member of Grace Mennonite Church in Prince Albert, says, “I still have lots of energy, and, hopefully, good years in front of me,” adding that he sees his award as “an encouragement to keep working,” particularly in the area of relationships between the Mennonite community and Canada’s Indigenous Peoples. 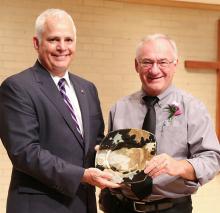