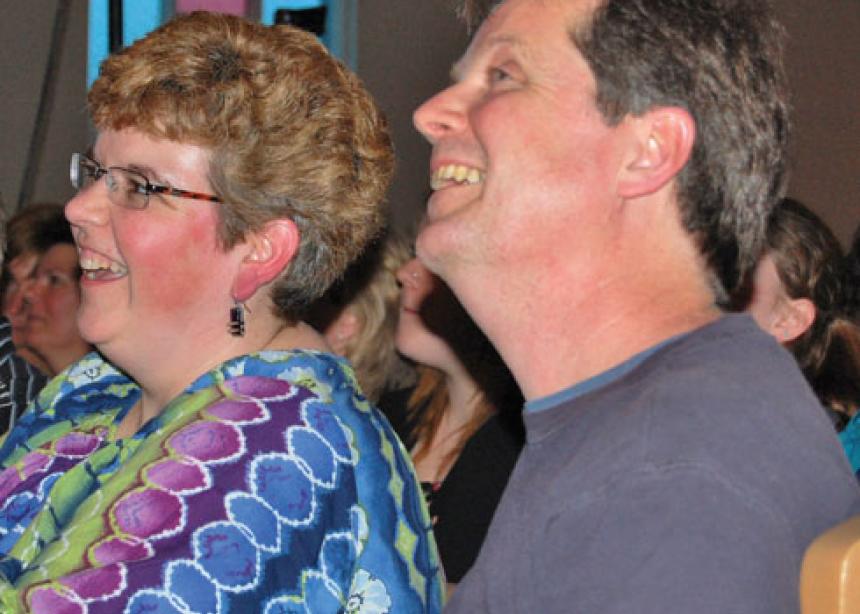 After 20 years of service as children’s choir director at Sargent Avenue Mennonite Church, Winnipeg, Man., Lori Wiebe gets to sit back on May 8 and enjoy an encore of songs from past musicals she has directed over the years. Pictured at right is Mel Braun, who is also leaving his post as accompanist after 11 years.

For Lori Wiebe, the May 8 performance of The Rock Slinger and his Greatest Hit, a musical about David and Goliath, was a significant milestone in her life. After 20 years of directing the Sargent Avenue Mennonite Church Children’s Choir, this was her last musical.

In 1990, Wiebe, an elementary school music teacher, decided to take on this long-time church ministry position. She wanted the church’s children to be involved in worship in a significant way. It was important for her to share with the children how the music and words fit in with the biblical themes of worship.

“I was looking for performing music with ‘some meaning’, if you know what I mean,” she says. “Not that school choirs don’t sing meaningful music!”

Wiebe credits the popularity of the choir to the hard work of many people, including her two accompanists over these 20 years—Betty Rempel and Mel Braun—who have spent many hours behind the keyboard practising and performing. But her unique style may also have something to do with it. Her approach was to make rehearsing fun by employing Jeopardy-style games and, of course, lots of candy!

To show their appreciation, an alumni choir led by Elaine Enns showered Wiebe with an encore of songs from past musicals. It was a way for the church to honour her for her dedication and love of children.

Choral music has been a treasured part of Sargent Avenue for decades, and the children’s choir has been part of that. But things have changed lately. As with many churches, membership has not grown and the number of young children—and potential choir members—has declined as well. More than a decade ago, families from beyond the congregation became interested in a church choral experience for their children; over the years children from at least 10 other Mennonite churches and numerous other Christian communities have been represented in the choir.

Because of this, the choir has also started performing beyond the church walls. The junior choir has been a significant part of four Camps with Meaning recordings, as well as the Jubilee Sunday School series. It has started worshipping at some of the other churches of members and has participated in numerous inter-choral events, such as Westgate Mennonite Collegiate’s recent 50th anniversary celebrations.

Norinne Dueck, a Sargent Avenue member and music teacher, will now take over the baton, leading the choir in these dynamic ministry opportunities. 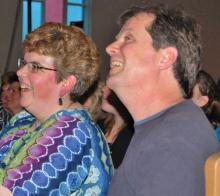 After 20 years of service as children’s choir director at Sargent Avenue Mennonite Church, Winnipeg, Man., Lori Wiebe gets to sit back on May 8 and enjoy an encore of songs from past musicals she has directed over the years. Pictured at right is Mel Braun, who is also leaving his post as accompanist after 11 years.