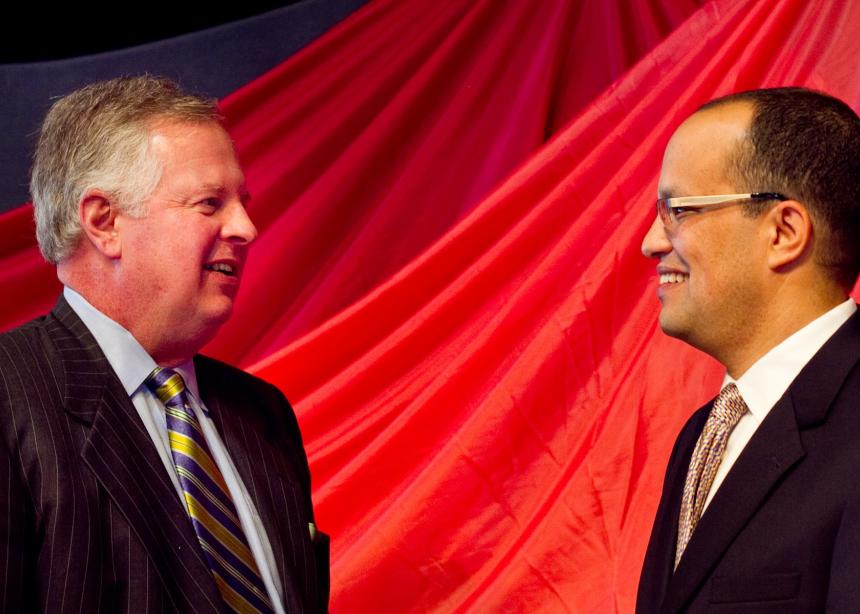 Loren Swartzendruber will serve another four-year term as president of Eastern Mennonite University.

Andrew (Andy) Dula of Lancaster, Pa., chair of the EMU board of trustees, announced at the opening convocation of second semester Wednesday, Jan.  12, that Dr. Swartzendruber has “gratefully accepted” an appointment to serve a third term that begins July 1, 2011 and ends June 30, 2015.

The EMU board worked with the board of directors of the Mennonite Educational Agency (MEA) of Mennonite Church USA in an extensive review of the work of the president. The EMU and MEA boards formed a presidential review committee to gather feedback and data from internal and external constituents.

Major accomplishments during Swartzendruber’s second term include: key administrative positions filled, including EMU provost, vice president for finance, vice president/seminary dean, and vice president/academic dean; a successful re-accreditation for another 10 years by the Southern Association of Colleges and Schools and the Association of Theological Schools; leading the institution through a difficult economic environment while balancing the budget; LEED-certified building projects; and successful fund raising for and completion of Phase II of the University Commons.

“The EMU board of trustees looks forward to our continuing work with President Swartzendruber,” Dula said. “We are grateful for his leadership, his deep commitment to God, the church and Anabaptist understandings, for his effective relationships within the EMU community and across the church, for his advocacy of Mennonite education, his sense of financial stewardship and fundraising, his collaborative approach to work and his sense of humor.”

In his response, Swartzendruber paid tribute to his wife of 41 years, Pat Swartzendruber, noting: “Her partnership in this enterprise has been invaluable. Not only is she my best friend and life partner, she is a confidant whose judgments I can trust. I am a better person and leader because of her love and influence.”

Swartzendruber became EMU’s eighth president on January 1, 2004. He came to EMU from Hesston College, a two-year Mennonite school in Hesston, Kan., where he served as president since 1994. Before that, he was associate executive secretary of the former Mennonite Board of Education in Elkhart, Ind., ten years.

The Kalona, Iowa, native graduated from EMU in 1976 with a bachelor of arts degree in liberal arts and earned a master of divinity degree from Eastern Mennonite Seminary in 1979. He completed a doctor of ministry degree at Northern Baptist Theological Seminary in 2000.

Swartzendruber was ordained to the Christian ministry in 1975 at Lower Deer Creek Mennonite Church near Kalona and was pastor at Salford Mennonite Church, Harleysville, Pa., 1978-83.