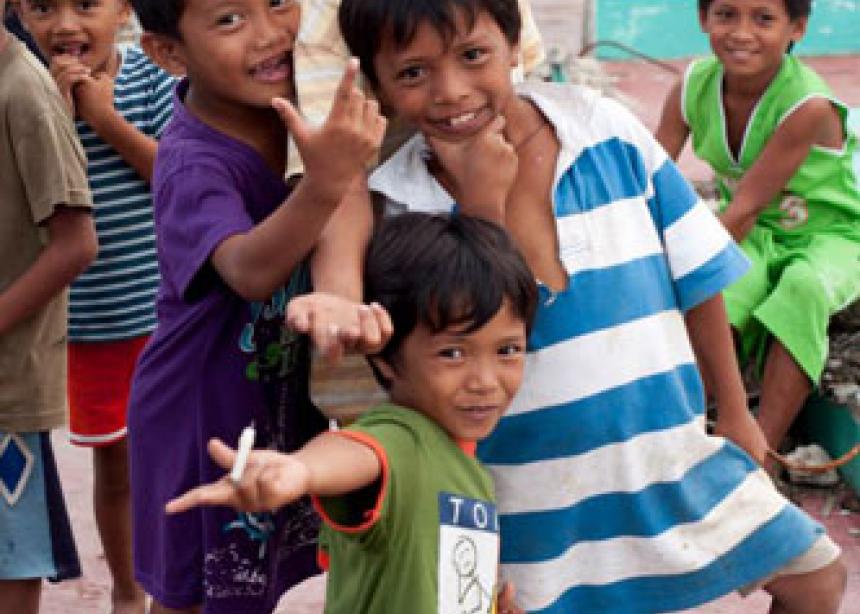 In the wake of Typhoon Bopha in the Mindanao region of the Philippines, Daniel and Joji Pantoja’s staff loaned one month of their salaries to purchase food aid for 650 families, prompting smiles of gratitude from young recipients.

A typhoon, five million hungry people and no available funds for relief operations. When Peacebuilders Community Inc. (PBCI) faced that scenario late last year, staff rose to the challenge by digging deep into their own pockets.

Mennonite Church Canada Witness workers Daniel and Joji Pantoja lead PBCI peacebuilding teams in the Mindanao region of the Philippines. Their staff unanimously agreed to loan their next month’s salaries to purchase relief food packs. About $2,400 was collected to help feed 650 families for five days. A week later, Philippine Business for Social Progress joined in to feed the hungry, and others followed. With help from partners, the effort targeted hard-to-reach geographical areas.

Called a “super storm” in the media and nicknamed “Pablo” in the Philippines, Typhoon Bopha unleashed its fury on the Philippine island of Mindanao on Dec. 4, 2012. More than a thousand people were killed. Hundreds of thousands of families were left homeless and millions lost their sources of livelihood.

Although the Pantojas are clear that PBCI does not normally operate as a relief distribution centre, it is guided by a theology that embraces harmony with God, self, others and creation. Like Jesus, their ministry seeks to feed the hungry, heal the sick and comfort those who mourn, regardless of their faith or background.

In the wake of Typhoon Bopha in the Mindanao region of the Philippines, Daniel and Joji Pantoja’s staff loaned one month of their salaries to purchase food aid for 650 families, prompting smiles of gratitude from young recipients.

With a food pack over his shoulder, a typhoon survivor knows that he can feed his family for five days.